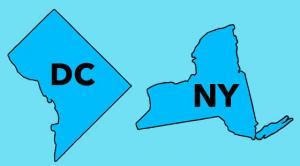 Oh yeah...and if you do live in these states, you may even qualify for a FREE (as in, $0 premium) Bronze ACA policy: