Where Things Stand AFTER the Week 7 HC.gov Enrollment Report: 11.16 million QHPs and counting

OK, with the big Week 7 HC.gov Report having been released, I can now fill in most of the blanks for the 2019 Open Enrollment Period: A grand total of 11.16 million QHP selections nationally so far. That includes 8.45 million on the federal exchange, plus another 2.7 million on the 12 state-based exchanges. If the counting were to stop right here, the total would be almost exactly 5% lower than last year, which would actually be pretty good all things considered.

HOWEVER, it isn't over yet. Eight of the state-based exchanges have enrollment deadlines past 12/15/18, with two of them stretching out as late as January 31st. In addition, most residents of Alaska are still eligible, as is anyone in Washington State or Vermont who had problems on the 15th (see link for details). 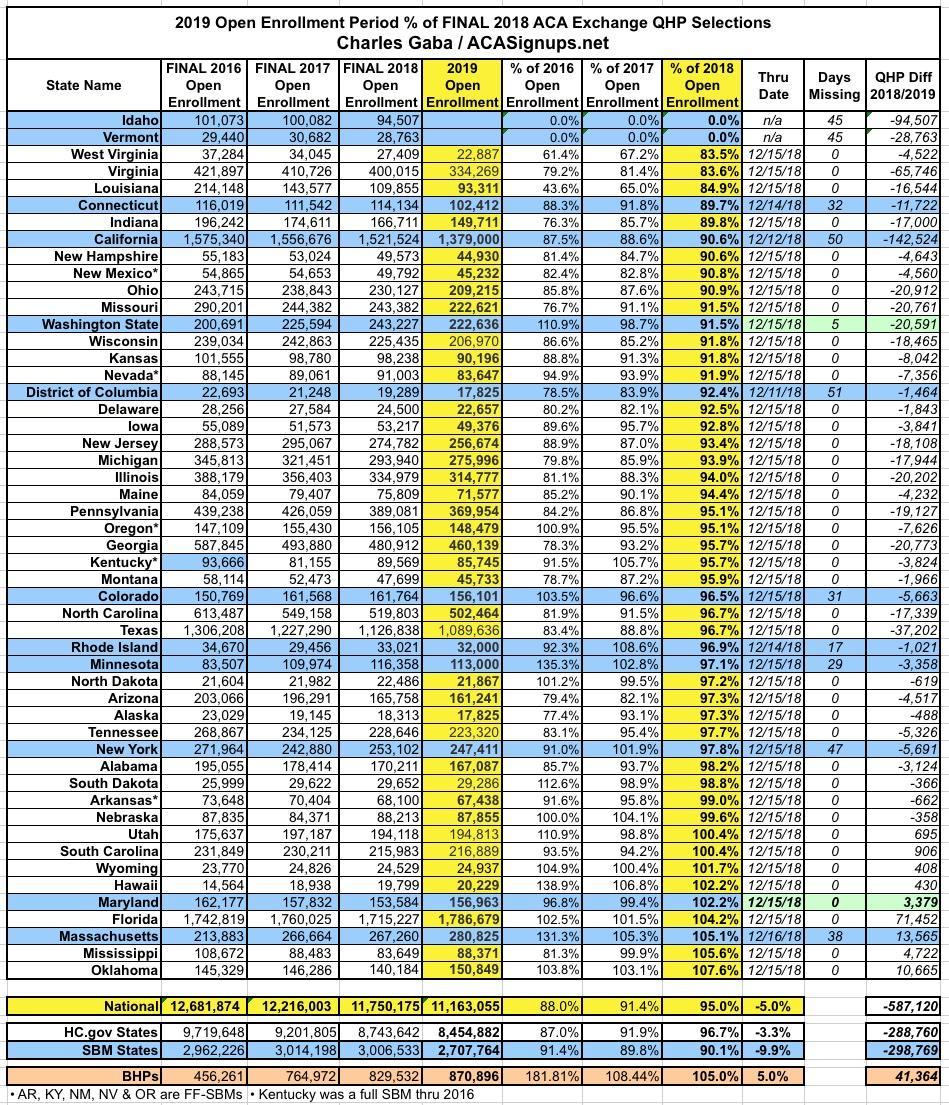 In addition, there's no numbers at all yet from Vermont or Idaho, which will likely add another 120,000 or so to the total, and some pre-12/15 enrollment data still missing from California and DC. At the same time, the federal exchange total will likely drop slightly (last year it was reduced by 79,000 people after Week 7 was added in, as people made last-minute cancellations or were denied coverage based on data verification issues). At this point, 11.3 million QHPs by January 31st is likely; 11.4 million is conceivable.

Here's a visual version fo the table above. 9 states are actually running ahead of last year's final total, with Oklahoma leading the way, followed by Mississippi, Massachusetts, Florida, Maryland, Hawaii, Wyoming, South Carolina and Utah. I expect the last two to drop back below 100% after the "purged" enrollees are removed next week, however.

I noted yesterday that people should keep an eye out for New Jersey. In the end, they look like their final enrollment tally will be...right in the middle of the pack, roughly 7-8% behind last year. It's important to keep in mind that while it may look like reinstating the mandate penalty "didn't affect" enrollment, it DID lower premiums by an average of $500 per enrollee, which means that if they hadn't reinstated it, enrollment would've been lower still (and in fact off-exchange enrollment is likely up or at least even year over year, though that data won't be available for awhile). 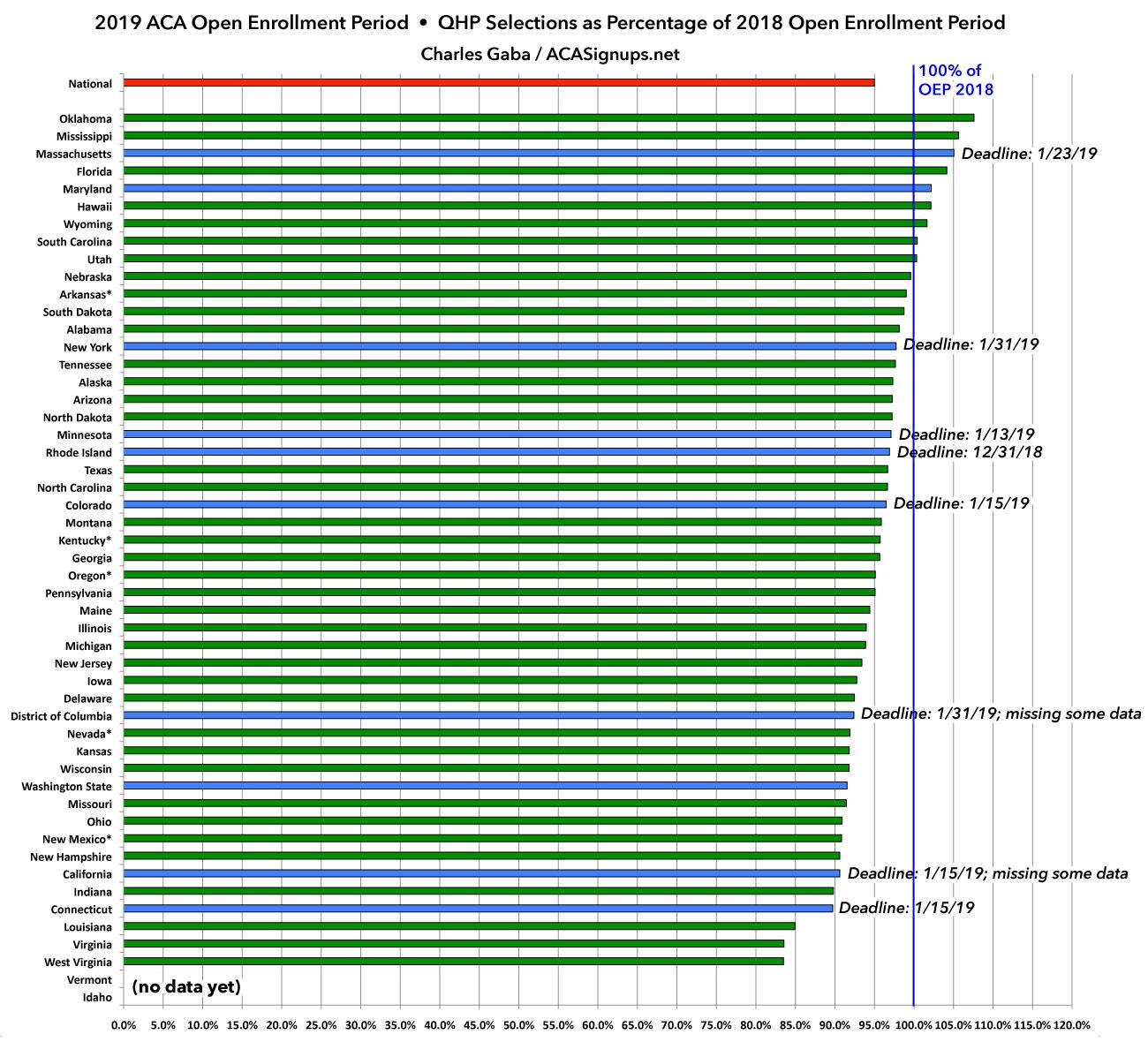 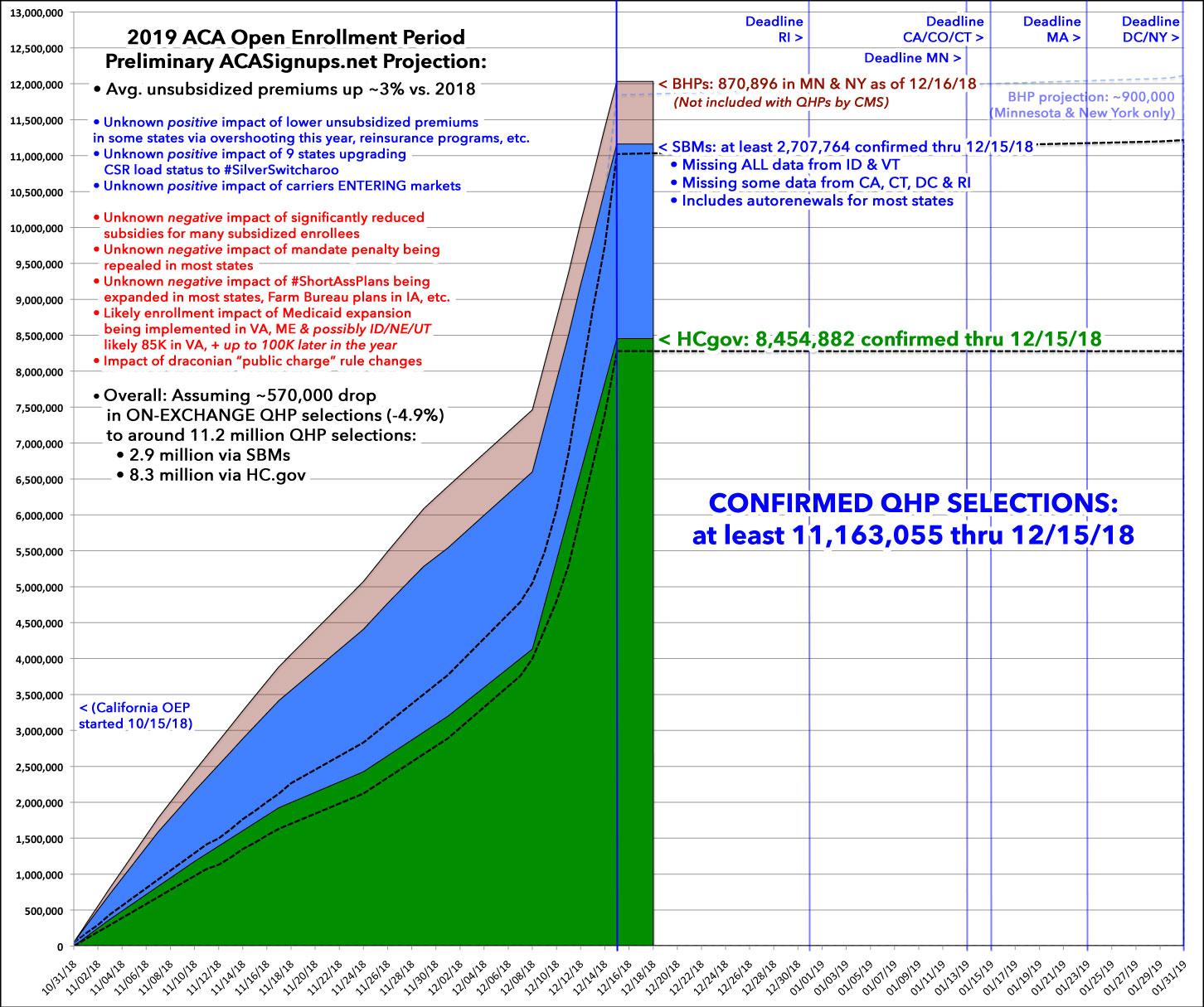