As I noted a few days ago, now that the 2019 ACA Open Enrollment Period is actually underway and the approved individual market premium rate changes have been posted publicly for every state, I'm finally able to go back and wrap up my 2019 Rate Hike Project for the nine states which I was still missing final numbers for.

As I further noted, the approved rates in most of those states didn't change much compared to the preliminary/requested rate changes I had already analyzed earlier this year:

There's one exception to this, however: West Virginia rates are increasing by 9.3% instead of 14.9%

That just left Alaska and Texas. In Alaska, I was confused because neither the preliminary nor the approved rate changes match up with this press release by the state insurance department, but they're quite insistent that a 3.9% reduction is the final word, so I'll stick with that.

When I last checked in on the Lone Star State, I estimated the weighted average 2019 rate change statewide to be around 3.7%, with rates likely dropping by around 8.7% if not for #ACASabotage including the repeal of the individual mandate and the expansion of non-ACA compliant #ShortAssPlans by the Trump Administration.

The final, approved changes are a bit lower almost across the board, however. Six of the twelve carriers saw their approved rate changes reduced, while two of them were increased (or at least saw a reduced decrease, in the case of Blue Cross Blue Shield). The net overall effect was to lower Texas' rate hikes from 3.7% to...2.3%.

I'm also lowering my #ACASabotage impact estimate from 13.5% down to a flat 10% for the carriers without a hard number from the carrier themselves, based on a general sense that it's not causing quite as big of an impact nationally as earlier estimates had indicated.

(The only carrier I'm a bit iffy on is CHRISTUS, which had clearly requested a 9.6% increase. The RateReview.HealthCare.Gov database clearly shows that this was reduced by several points, but it's confusing about just how much it dropped by. My best estimate using an unweighted average is that they were approved for roughly a 4.0% average increase.) 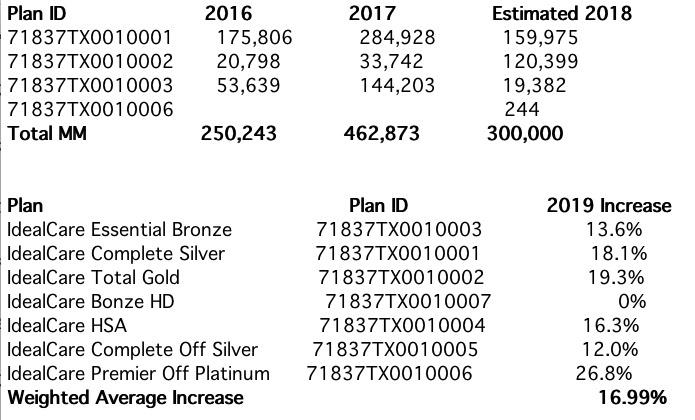