My half-assed attempt to explain how reinsurance works 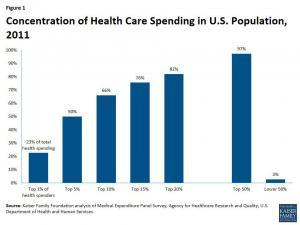 When the ACA exchanges first launched for the 2014 Open Enrollment Period, the law included three individual market stabilization programs. One of the programs was called reinsurance, and as far as I know it worked pretty well. Unfortunately, the federal ACA reinsurance program sunsetted after only three years, at the end of 2016, which is part of why rates spiked so much in 2017 (they shot up in most states in 2018 as well, but for very different reasons).

In response, several states (Alaska, Minnesota and Oregon) have enacted their own, state-level reinsurance programs, and several more are on the way (New Jersey, Maryland and Wisconsin). It's a fairly cut & dried way of keeping premiums down (or even lowering them in some cases) which requires no additional federal spending and much less state spending than you would think.

Here's an example of how it works:

According to the Kaiser Family Foundation (KFF), around 1% of those in a given risk pool rack up 23% of total healthcare expenses, and 5% rack up about 50% of the total. 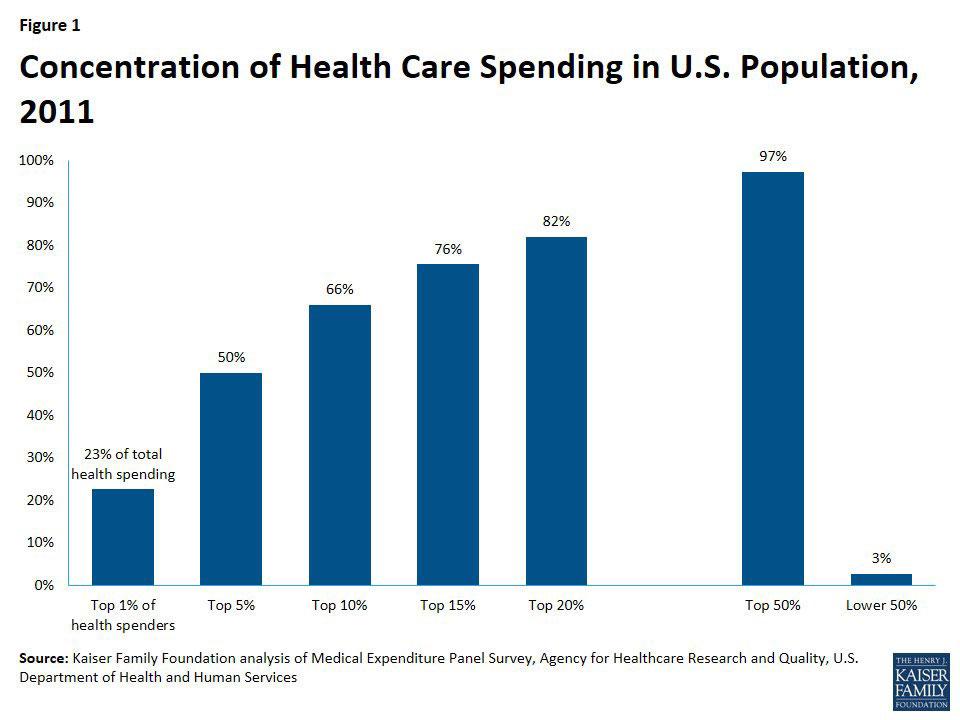 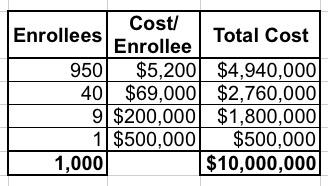 But here's the cool part about how state-based reinsurance waivers work within the ACA framework: If approved by CMS, the state would not have to come up with the full $170 million!

Here's why (I'm using national averages for this example; again, this will vary depending on the state):

Put another way, in this example it would cost the state $112 million per year to lower premiums by 15% for 38,000 residents.

In addition, there should be a residual effect: By lowering rates 15%, this should also encourage at least a few thousand more people to go ahead and enroll in a policy who otherwise wouldn't do so. If total enrollment increases by, say, 5,000 people, you now have a total risk pool of 105,000...and assuming most of those folks are lower risk (i.e., not part of that 5% high risk crowd), that should in turn improve the risk pool somewhat the following year, and so on.

Obviously the actual cost and impact on premium reductions could very widely depending on what the actual claim breakout is across the risk pool, how the program is structured and how much medical claims for high-risk enrollees are. If you make the thresholds more generous (70% instead of 60% of the cost, or starting at $30K instead of $40K, for instance), the impact would be greater. In New Jersey, they expect rates to be about 15% lower than they would be otherwise next year.

If you want some real-world examples of how effective reinsurance programs have already been, in Alaska, premiums dropped by a whopping 23.6% this year. In Minnesota, they only dropped by 6.3%, but next year are estimated to drop by another 8% or so even with the impact of mandate repeal sabotage. Oregon's reinsurance program isn't quite as robust; it only kept rates down by around 6% this year vs. what they otherwise would be, but that's still hundreds of dollars in savings per unsubsidized enrollee.

Here's a great summary from SHADAC of how eight different states have approached ACA individual market risk pools. Unfortunately, the included table doesn't include either New Jersey or Maryland (both of them submitted their proposals more recently), but it gives a good overview of the variables. I've created a simplified version below for illustrative purposes:

REINSURANCE: IT'S A VERY GOOD THING.