EAST PROVIDENCE, R.I. (June 27, 2018) – Rhode Island must act “without delay” to protect consumers from rising health coverage costs brought on by federal policy changes according to a report issued to Governor Raimondo by the state’s Market Stability Workgroup.

“People representing a wide variety of viewpoints engaged in lively discussions over the course of 8 weeks,” said Workgroup co-chair Bill Wray, Chief Risk Officer at the Washington Trust. “The fruits of those discussions are in this report. All of us – consumer advocates, business groups, health insurers and providers – were able to broadly agree on how best to protect Rhode Island’s insurance markets.”

The Workgroup – jointly convened by HealthSource RI (HSRI) and the Office of the Health Insurance Commissioner (OHIC) – reached consensus around a package of three near-term actions which it recommends the state pursue “immediately.” The Workgroup notes an urgent need to act in time to impact the rate-setting process for 2020 premiums. The recommendations include:

I should note that Rhode Island appears to be a bit unique in that while they don't currently have STLD plan regulation codified into law, they do have some pretty strict regulations on them amount to nearly the same thing (STLDs are apparently required to include Guaranteed Issue, Community Rating and so forth via regulation by the state insurance dept., which makes them fairly useless in terms of being more attractive to healthy ACA enrollees). It'd still be a good thing to lock down strict regulation of them into law, however.

I should also note that unlike some states where the repeal of the mandate is expected to have a pretty devastating impact on ACA premiums over the next few years, in Rhode Island the two individual market carriers participating in the market don't seem to think it'll be that big of a deal; one didn't add anything to their 2019 premiums because of it, while the other one only tacked on about 2% to their premiums to account for it. On the other hand, that's still an extra $50 or so per enrollee per year, which amounts to an extra $200/year for an unsubsidized family of four, so it'd still be a good thing for Rhode Island to reinstate the mandate.

Besides, if the carriers turn out to be wrong and the mandate repeal ends up hurting their risk pool more than they thought, they'll just tack the extra cost onto 2020 premiums instead.

The reinsurance program is an inherently good idea for every state, of course.

As for whether or not they'd be able to get any or all of these in place in time for the 2019 open enrollment period, I have no idea. It seems a bit late in the game to do so, but I could be wrong.

Following the release of the Workgroup’s recommendations, the General Assembly passed The Rhode Island Market Stability and Reinsurance Act (S-2934A/H-8351) to authorize HSRI and OHIC to seek a federal waiver through the ACA to establish a state reinsurance program. Reinsurance helps control insurance premiums by establishing a separate fund to pay for some of the most expensive claims for consumers insured in the Individual Market. This legislation authorizes the state to begin the federal waiver application process and does not commit any state funding. Federal savings realized by lower premiums and matching funding from other sources would be identified and proposed separately through 2019 state legislation.

In addition to the above near-term actions, the Workgroup noted that further work is needed, including work focused on how to fund and implement a state reinsurance program and how to best design a shared responsibility requirement; consideration for codifying consumer protections into state law; and work to address the underlying drivers of health care costs in the state.

“Without action at the state level, we will see much higher health insurance rate increases and lose much of the coverage gains we’ve achieved under the Affordable Care Act (ACA),” said Workgroup co-chair Steve Boyle, president of the Greater Cranston Chamber of Commerce.

In response to federal threats to Rhode Island’s health insurance markets, OHIC and HSRI convened the Market Stability Workgroup, charged with considering what, if any, measures the state should take to mitigate the potential impact of federal changes on health coverage costs, consumer choice, and access.

The Workgroup was established with three guiding principles: sustain a balanced risk pool; maintain a market that is attractive to carriers, consumers and providers; and protect coverage gains achieved under the ACA.

The group considered recent federal actions that may undermine market stability in Rhode Island, including the repeal of the shared responsibility requirement penalty and the proposal to expand consumer access to non-ACA compliant plans. The Workgroup considered policy options aimed at protecting market stability. These options were categorized in terms of three key provisions of the ACA: affordability, shared responsibility, and insurance reforms.

Information on the Workgroup, including its members, meeting materials, and complete report with recommendations, can be found here.

As an aside, I was amused to see this on the very last page of the actual Workgroup Presentation itself: 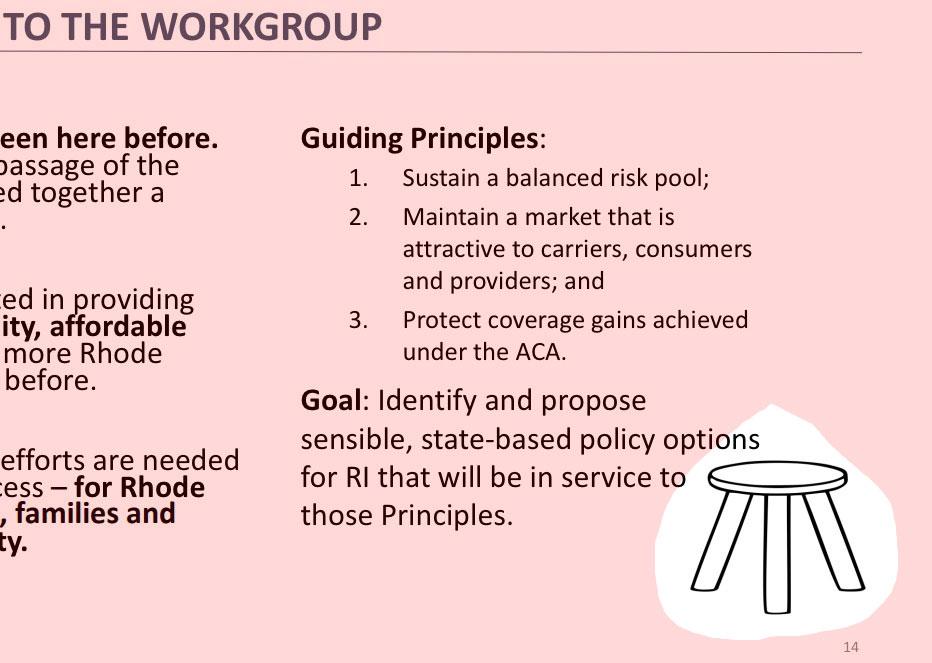