Last month, Covered California, the largest ACA exchange outside of HealthCare.Gov itself, issued a report which concluded that the combined impact of these factors will cause unsubsidized rates to increase by somewhere between 16-30% across most states.

Then, a couple of weeks ago, there was a presentation at the National Health Policy Conference which concluded that the overall average full-price increase will likely be somewhere around 20% total...again, with about 2/3 of that being due specifically to Trump/GOP sabotage efforts.

Well, today the Urban Institute has released their own detailed analysis of what they expect, and it's pretty much the same picture:

On February 20, 2018, the Departments of Treasury, Labor, and Health and Human Services released a proposed regulation that would increase the maximum length of short-term, limited-duration insurance policies to one year. These plans, sold to individuals and families, are not federally required to comply with the Affordable Care Act regulations that prohibit annual and lifetime benefit limits, require coverage of all essential health benefits, and otherwise prohibit insurers from setting premiums or choosing whether to sell coverage to particular people based on applicants’ health status and health history. As such, these plans do not meet minimum essential coverage standards under the law; thus, the Congressional Budget Office does not consider them private insurance. If implemented, the rule would permit these plans to compete against the ACA-compliant plans.

Importantly, this change would be implemented on top of an array of other significant policy changes made since the beginning of 2017. We analyze the implications of the 2017 policy changes relative to the ACA as originally designed and implemented (prior law), in addition to the potential consequences of the proposed expansion of short-term limited-duration policies. In estimating the effects of these changes on insurance coverage, premiums, and federal spending, we take into account the variations in state circumstances and state-specific laws on short-term plans.

Key findings include the following:

The Urban Institute study includes some important details which are important to keep in mind. First of all, they note that there's an important distinction between the short-term plans which the Trump Administration is hawking and actual healthcare policies which cover essential health benefits (i.e., ACA-compliant policies). The Congressional Budget Office warned the Trump Administration and Congressional Republicans a full month before Trump took office that they'd be no part of this scam:

Massachusetts, New Jersey, New York, Oregon, Vermont, and Washington have laws that would prevent an expansion of STLDs. Results for these six states are the same as in the current-law scenario. Michigan and Nevada have laws that would limit STLD policy expansion. In these two states, we reduce the incentives to choose STLDs by roughly half. The remaining states either have no regulations that would substantially limit STLD policy expansion or have regulations that would allow sales, renewals, or extensions of STLD policies for 12 months or more. Our second and third categories are primarily based on duration limits of contract length and renewals. Many states have limits, but our categorization is based on the ability of a person to enroll in and extend or renew a STLD plan for up to 12 months.

They break out their projections of 2019 coverage under three different scenarios:

I should also note at this point, as an aside, that "STLD" may stand for "Short-Term, Limited Duration", but it sounds an awful lot like "STD" or "Sexually-Transmitted Disease". Perhaps that's just me, though.

Anyway, here's how they think things would break out:

Interestingly, the Urban Institute study assumes that if Hillary Clinton had become President, the total individual market would be around 19.4 million people as of 2019. This would be about 1.4 million higher than it was in March 2017 (around 18.0 million), although both of those numbers appear to include Grandfathered and Transitional policy enrollees.

Also noteworthy: The UI study projects that under current law, the 2019 indy market will drop to around 14.0 million by next year: An average of around 8.0 million subsidized enrollees and 6.0 million unsubsidized (both on & off the exchange). The total sounds about right to me, although I'd guess the breakout would be more like 9 and 5 million respectively.

Under the Short-Term Plan scenario, they foresee subsidized enrollment dropping by over 600,000 more people and unsubsidized dropping by 1.5 million, along with small additional drops in emloyer and Medicaid coverage, for a net increase in the uninsured of around 2.5 million more people next year on top of the 6.4 million which they believe current Trump/GOP sabotage efforts will have caused by 2019.

This is another way of saying what I've already been pointing out: Between the CSR cut-off, the ad/outreach starvation and the general confusion/uncertainty caused by last year's "repeal/blow it up!" efforts by both Trump and the GOP, the bulk of the damage has already been done.

Unlike the other studies/estimates, the UR report even breaks out their projections on a state-by-state basis under all three scenarios, which is awesome. They further separate the states out into three categories: 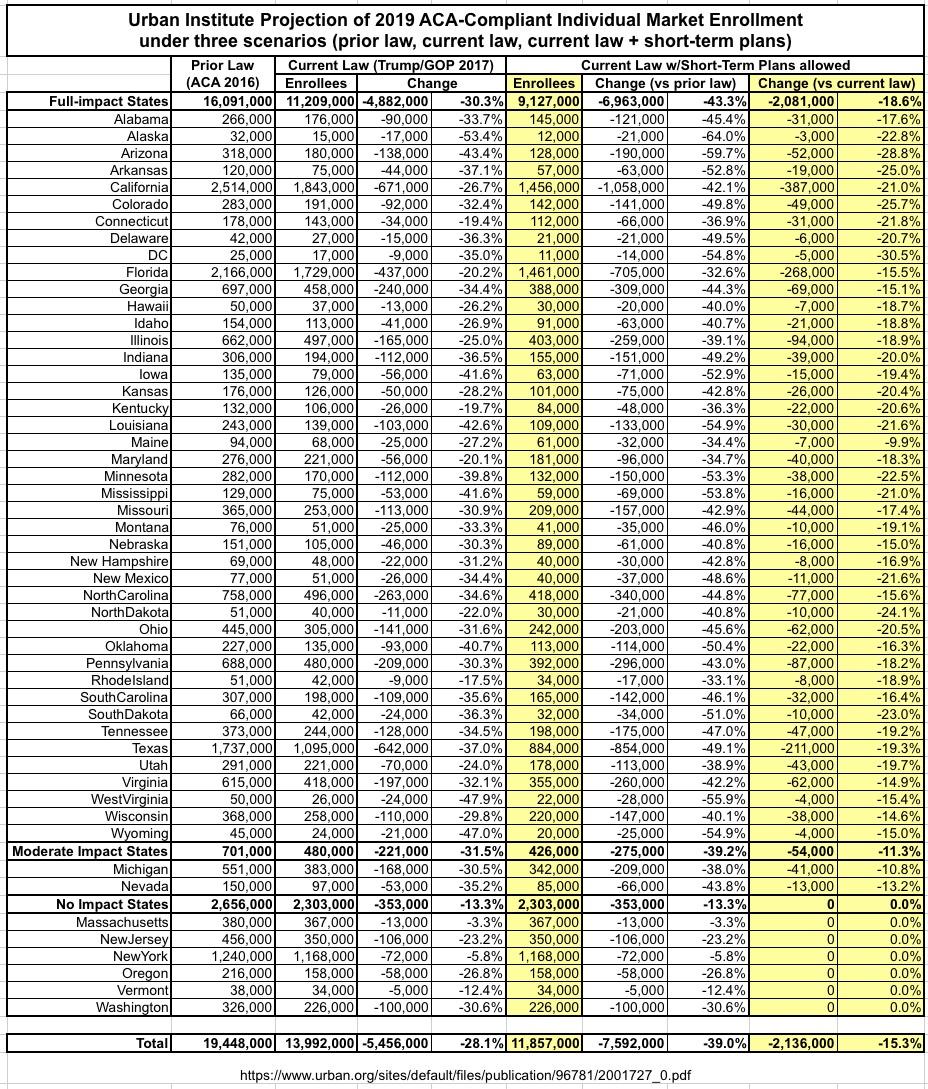 They then go into an analysis of what the impact on the actual unsubsidized, full-price premiums would be due to the damage to the risk pool from healthy people leaving the ACA-compliant market, and came up with the following: 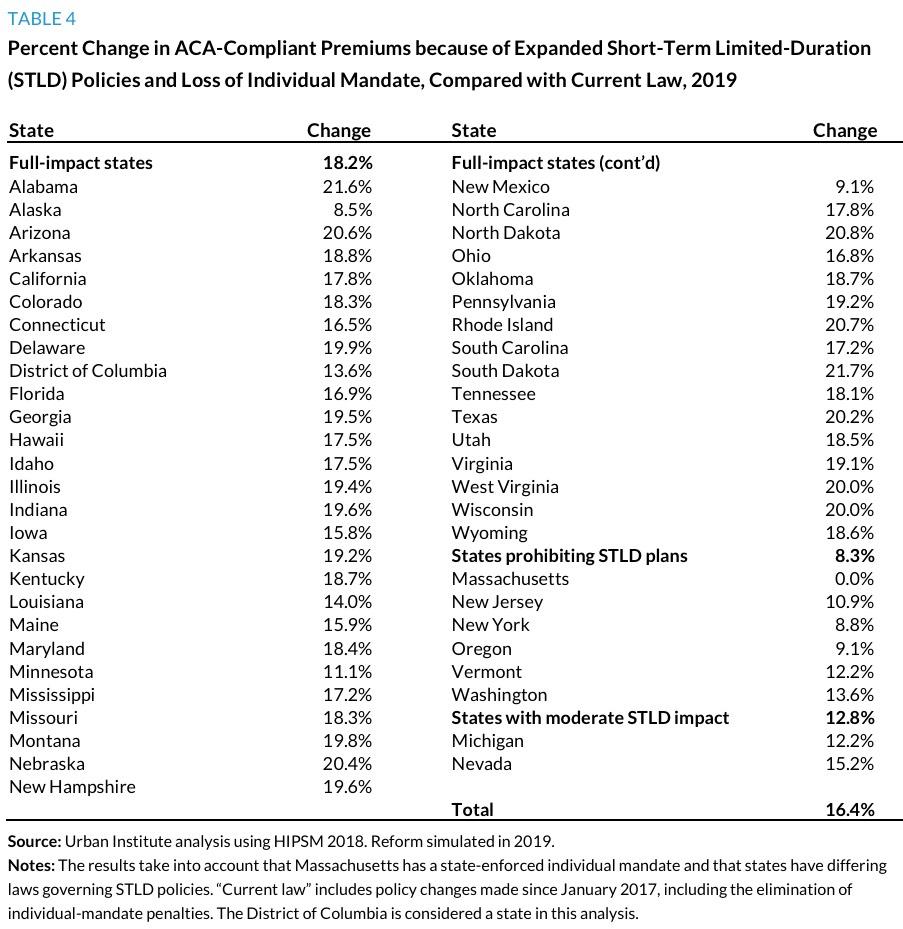 Overall, the estimated impact of Trump/GOP sabotage in 2019 appears to be shaping up to be almost exactly the same as it is in 2018: Around an 18% increase in unsubsidized premiums on ACA-compliant individual market polices.

Put another way: Since rate increases are compounded, that means if you strip away the non-sabotage related factors each year (medical inflation, etc.), Trump/GOP sabotage alone will have caused unsubsidized individual market premiums to go up about 40% over the first 2 years of the Trump Administration.