ACA: I MADE IT!! (plus, enrollment chart now added to ACASignups.net)

Yeah, that's right: I wandered through the Healthcare.Gov desert for 40 days (well, 48 to be precise) and came out the other side with a small, but not insignificant subsidy for my family and I. $62/month or $744/year. Not huge, but that's enough to cover, say, our cable bill, anyway.

More importantly, this is based on our projected income next year. If we end up falling short, our actual subsidy could be significantly higher (or lower, if we do better than expected, although that would be a good problem to have, of course).

I haven't actually enrolled in a plan yet, although I did a bit of window shopping just to make sure that the site would actually let me do so. My wife and I will do so together later this week, under calmer, more organized circumstances. We do have 22 Silver or Gold plans to choose from, and while our actual premiums look to be fairly close to what we're paying now, the coverage should be better.

Going forward, whenever possible I'm going to only be listing actual enrollments for each state. In this sense, my numbers will more closely parallel EnrollMaven.com, an openly anti-ACA website that's also been tracking Obamacare signups.

I was highly skeptical of EnrollMaven for the first few weeks, especially since their definition of an enrollment didn't appear to include Platinum Exchange plans, for some reason. However, a few days ago they corrected this (and frankly, I never understood how they could possibly know which type of plans people were enrolling for anyway) and their methodology otherwise seems to be sound. In addition, they've at least been completely frank about their negative opinion of the ACA, and many of my sources have turned out to be identical to theirs, so I've grown pretty comfortable with using them as a cross-check on my own numbers.

Having said all of that, here's the latest figures as of Sunday, Nov. 17:

It's important to remember that this does NOT mean that only 44,000 more people have been signed up since the beginning of the month--this only represents new numbers from 8 states (I've bold-faced them...California, for instance, added another 24,000 between 11/2 - 11/12).

Now, EnrollMaven had the total at around 50K just before the HHS report came out; the total ended up being more than double what they had listed. If that holds true this month, it suggests that November enrollments will be at least 2x that of October (200K+, or 300K+ total). Still sucky, but still a huge improvement and an upward trend.

Finally: By popular demand, I've started a visual chart/graph of the signups, using the HHS Dept. report from last week as a starting point (click for a full-size version): 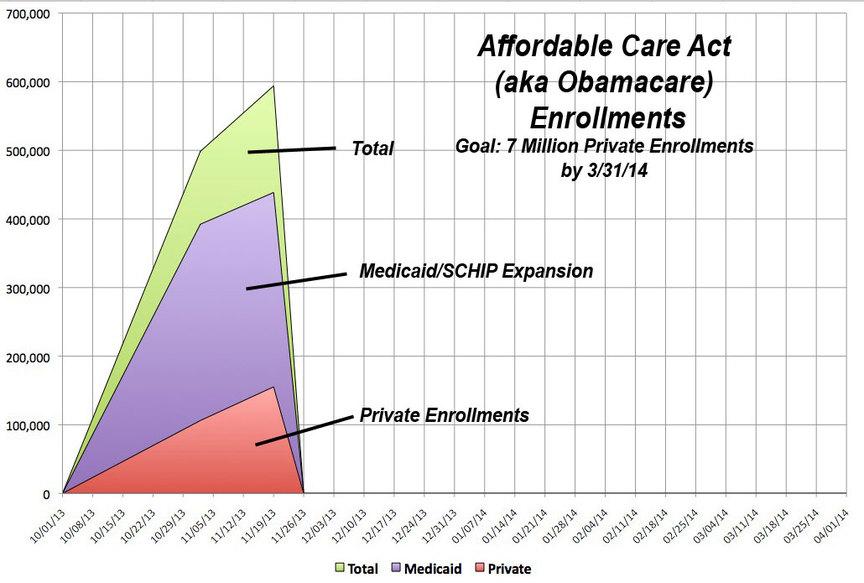 Oh, and just to keep things in perspective, here's the same chart scaled out to the actual stated 7 million enrollment goal by the end of the 3/31/14: 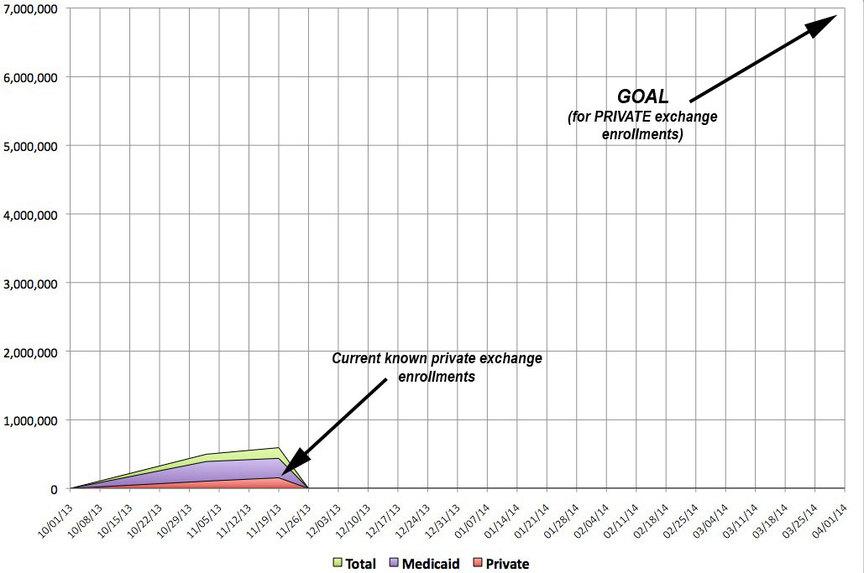 (Oh, I've also registered ACASignups.net as well; it goes to the same website, it's just a bit less unwieldy to type out)