OK, I'm not sure how much this particular milestone should be crowed about considering that over 40% of the enrollment period has elapsed, but new actual numbers have been rather thin over the weekend, so I figured I'd call some attention to it.

New York is the only state that's released it's latest figures today, but thanks to them doing so (95,000 private enrollments, 40,000 Medicaid/SCHIP expansion), the total now stands at over 711,000 private healthcare plans through the ACA exchanges.

Since the original CBO projection (remember, that was a projection, not an actual goal) through 3/31/14 was a tad over 7 million, that means that the exchanges have broken through the 10% mark. Yay team!

Some other cool numbers:

--Connecticut continues to kick major ass, having enrolled over 56% of their CBO projection. They could easily double or even potentially even triple the 33,000 figure that they were expected to achieve by the end of March.

--With today's New York update, the Empire State has also broken out with almost 44% of their enrollment goal achieved. Like Connecticut, since 41.8% of the period has passed, they're ahead of the game.

--Vermont has also seriously stepped up their game, and is now at 41% of their projection, just about on par with the elapsed time period.

Also, some housekeeping notes on the spreadsheet:

--I've modified the site even more, reducing each individual Worksheet from 2 weeks down to just 1 at a time. This makes it even easier to track the current numbers, while also allowing room on the right side for explanatory notes.

--However, all previous weeks are still accessible via the Tabs at the top (or bottom, depending on your browser?) of the spreadsheet (we're in Week 11 at the moment).

--On the graph itself, I've removed the projection line, not because it's "wrong" but simply because, between the missing data for the current week and the inevitable spike/drop-off effect as we hit 12/23 and 12/31 (and then again in mid-March), a straight-line projection is simply too difficult to chart.

--I have, however, emphasized the crucially important 12/23 date coming up next week.

--Finally, yes, I've zoomed the chart scale out from 2.5 million to 3.0 million as the combined Private/Medicaid numbers climb.

--I've finally solved the Mystery of Washington State. Unlike every other state (and HC.gov) which define an "enrollment" as "having completed their application and selected a plan", Washington State's exchange only officially considers an application to be "enrolled" if they've actually paid their first premium. The local reporters are using this as a guideline in their stories, which explains several articles that say "X thousand have completed their applications" and "ONLY have to make a payment" but still don't count that number as completed enrollments. This is noted on the spreadsheet.

On the other hand, this does give us a bit of insight about how the payment ratio is going so far; according to the WA numbers, around 27% of the total enrollees have paid, which sounds pretty good to me.

--Oh, and yes, the Spanish-languange version of Healthcare.gov has finally launched: CuidadoDeSalud.gov 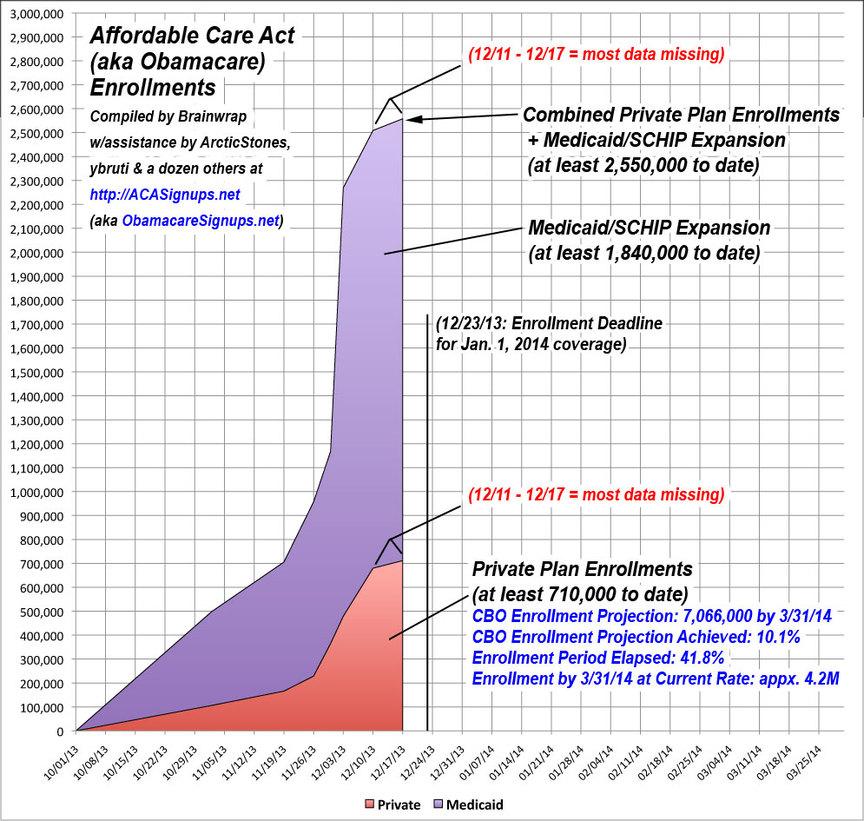 Update: OK, 2 more states have been updated--Colorado and, believe it or not, Oregon, which now (officially) claims to have successfully enrolled 7,500 people via their disastrous state exchange (seriously--by all accounts, the Covered Oregon site made the HC.gov problems look like nothing by comparison).