As of this morning, I had analyzed and plugged in the requested rate changes for all 50 states (+DC) and the approved changes for 45 of them. with Iowa and Oklahoma added just yesterday, along with minor corrections to Michigan, Washington and Colorado. However, time's a wastin', so I can no longer wait for the remaining 6 states to come out with formal press releases.

Fortunately, Avalere Health just came out with their own 2018 rate hike analysis, and although they used a completely different methodology than I did, their final national, weighted average estimate is virtually identical to mine: Just over 29%. With that in mind, I've decided to return the favor and utilize their data to help fill in the 6 blanks in my own spreadsheet.

Normally I run the weighted average rate changes based on insurance carrier market share. Avalere, however, lumps together all of the carriers in each state and then breaks out their estimates by metal level, which is fine with me. The big caveats here is that Avalere doesn't appear to be including off-exchange policies (though I could be wrong about that), and their analysis only covers the 39 states run through HealthCare.Gov. However, I already have the rate data for the other 12 states anyway, so that's fine with me.

So, what I've done is to list the average 2018 vs. 2017 rate changes by metal level (I've included Catastrophic plans for completeness, even though Avalere didn't include them in their study...but Catastrophic plans only make up a tiny fraction of enrollees anyway). Then, I consulted the official CMS 2017 Public Use File, which includes, among other demographic data, a breakout of 2017 Open Enrollment by metal level market share in all 39 HC.gov states.

Voila: this allows me to neatly calculate the weighted average unsubsidized increase in all 6 of the missing states. Again, the metal level ratios are likely somewhat different off-exchange, but the final numbers are close enough to what I already have for each state's requested increase that I'm pretty confident that these are fairly accurate. I have 4 of them listed below; the other two (New Hampshire and Texas) will be written up later today.

This just leaves the CSR impact in each state. Since all four of them are either "Silver Load" or "Silver Switcharoo" states, all I have to do is use Kaiser Family Foundation's Silver plan estimates from earlier this year to come up with what should be a fairly accurate estimate for each state.

With that, I give you the final, weighted average 2018 ACA-compliant individual market increases for Alabama, Hawaii, Missouri and Wyoming: 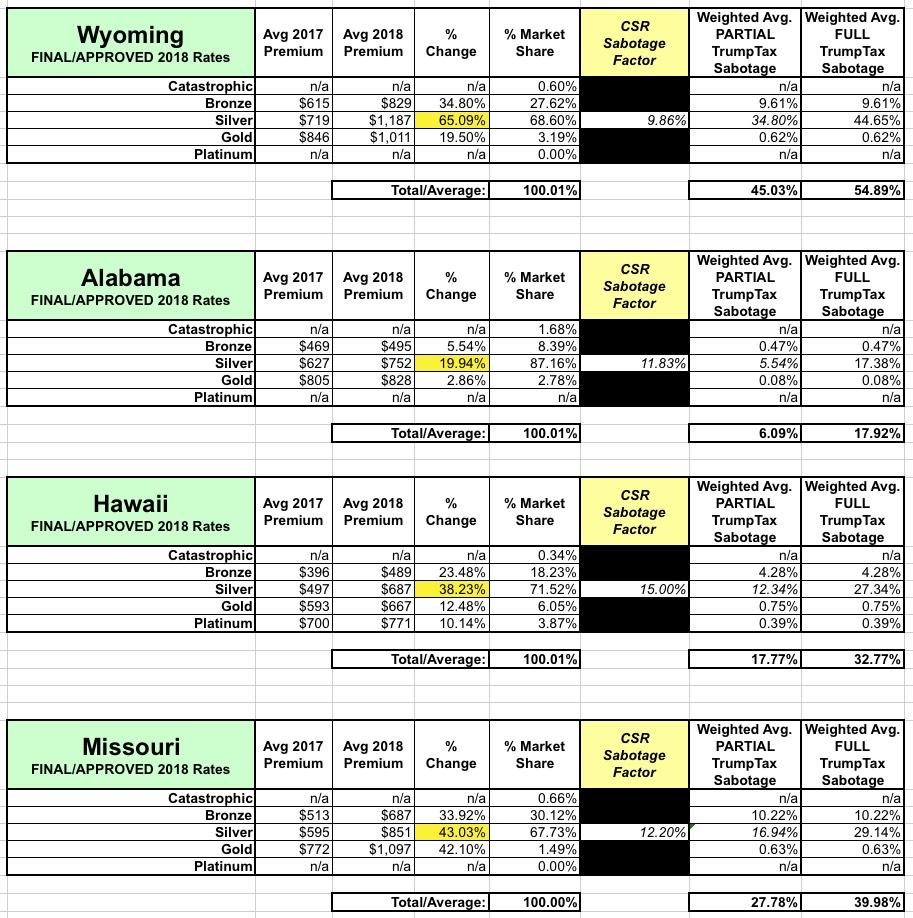