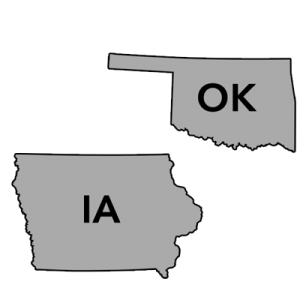 As it happens, Iowa and Oklahoma are easy enough to fill in; while I've been unable to find official rate approval documents for either state, there are several recent news articles which make it pretty damned clear that their requested rate increases are being approved pretty much as is. In addition, both states have only one carrier participating in the ACA exchange market anyway (Oklahoma does have a couple of smaller OFF-exchange carriers, but their numbers are too small to move the needle much).

Medica has refiled rates for individual health insurance coverage with the Iowa Insurance Division for the 2018 coverage year, which affect silver level plans and bring the average rate increase of silver plans to 56.7 percent over 2017 rates.

The move comes after a lack of certainty over the funding of cost sharing reductions provided by the U.S. federal government.

Previously, Medica filed 2018 rates with an average 43.5 percent increase over 2017. Iowa consumers may see higher premium increases if they are moving from another insurer to Medica. Final rates are subject to approval from the IID.

Iowans who buy their own health insurance through the Affordable Care Act exchange would see their rates increase nearly 57 percent next year under a revised rate proposed Wednesday.

The proposal is 13 percentage points higher than previously was estimated by Medica, the one remaining carrier selling individual policies in Iowa next year.

The last remaining insurer, Medica, threatened to pull out of the market too, potentially leaving the entire state with no insurer willing to sell plans in the individual market. Medica ultimately decided to offer coverage in all 99 counties—but with average premium increases of 57 percent.

Last year, Blue Cross Blue Shield of Oklahoma, as the only carrier participating on the ACA exchange in the state, jacked up their premiums by a jaw-dropping 76%. This resulted in the highest statewide average rate hike in the country of 71% overall.

Well, that certainly seems to have done the trick: This year BCBSOK (still the only on-exchange player and holding over 99% of the market anyway) is requesting a (relatively) modest 8.3% average rate increase...and their filing specifically calls out both the CSR and mandate enforcement factors as being major reasons. Assuming the Kaiser Family Foundation's estimates are accurate, that means that if the CSR payments were guaranteed for 2018, BCBSOK should actually be lowering their rates slightly, to the tune of around 2.4%.

Adding in the steep hikes from off-exchange only CommunityCare (which only has 1,400 enrollees) brings the averages in at a 1.9% rate drop if CSRs are paid, and an 8.7% increase if they aren't. 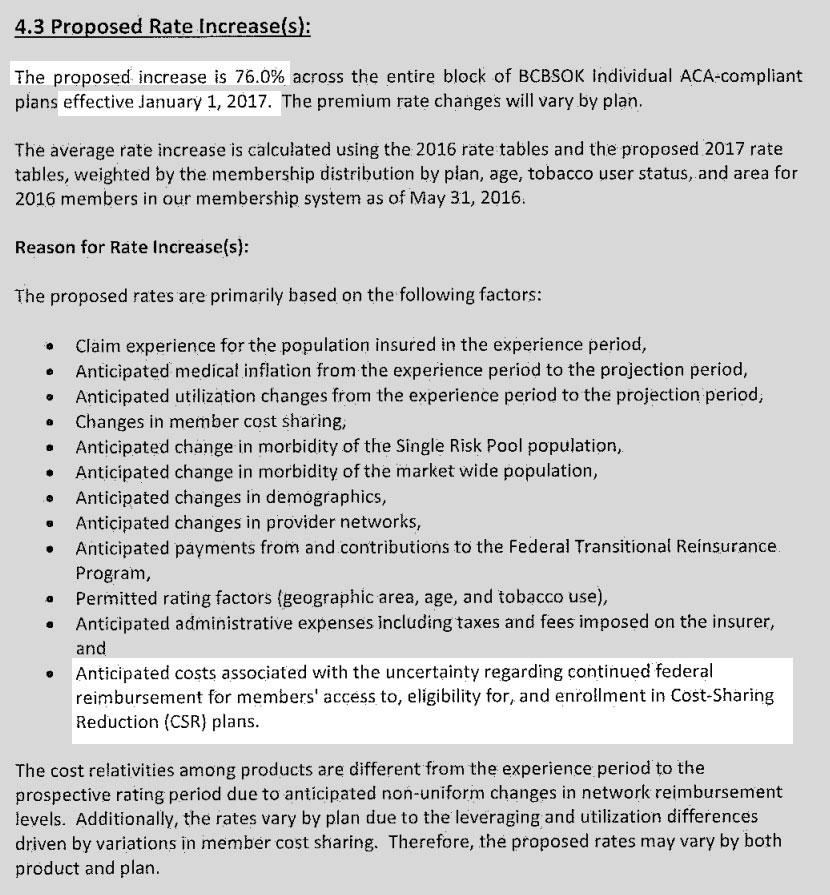 Yep...BCBS of Oklahoma had ALREADY baked in the CSR load over a year ago.

Anyway, it sounds pretty clear that Oklahoma is looking at a 9% overall rate increase next year...all of which is due to non-CSR factors (remember, the other 2 indy market carriers are off-exchange only).