I see that I've been thrown into the crossfire of a wonk debate between John Cochrane (who I've never actually heard of before today) and Brad DeLong/Paul Krugman (both of whom I very much have heard of!) regarding the question of whether the individual healthcare market is or isn't in a Death Spiral and/or whether it will/won't enter one next year.

Back in January, the Congressional Budget Office concluded that, overall, they didn't see any death spiral forming if the ACA is kept mostly intact...but also concluded that growth of the exchange population has likely plateaued; around 13 million appears to be the enrollment ceiling barring any significant changes to the law. Interestingly, however, a couple of weeks ago they concluded that there would also be no death spiral if the GOP's AHCA "replacement" plan were to become law either.

Meanwhile, over at the Brookings Institute, Matthew Fiedler ran his own analysis of the exchange risk pool and concluded "No Death Spiral!" there either:

...while the small decline in sign-ups will have negative consequences for the people who would otherwise have been insured, the impact on the individual market risk pool will likely be minor. It therefore remains likely that insurers’ individual market business will return to a roughly break-even or slightly profitable position in 2017, absent other policy changes.

...As shown by the black dashed line, there was essentially no relationship between premium changes and sign-up changes, which implies that premium changes had little or no effect on sign-ups. By contrast, for the individual market to have faced a death spiral, premium increases would have needed to cause large reductions in enrollment, akin to the relationship depicted by the red dashed line. 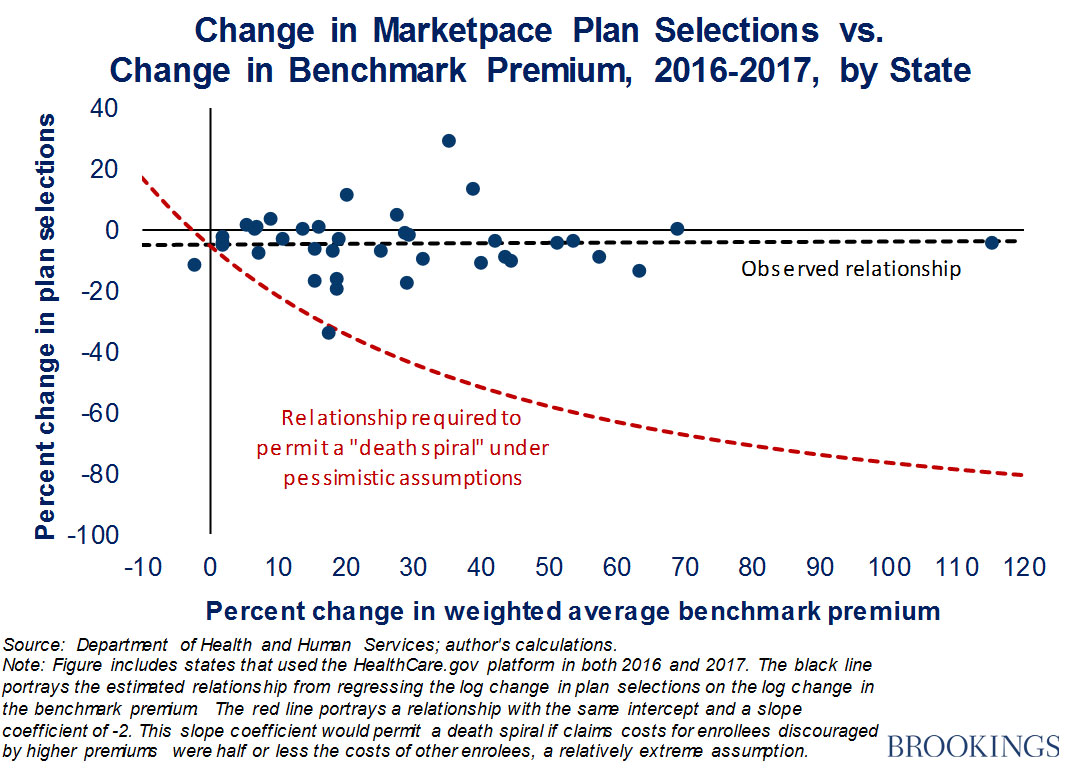 Fiedler's point is that there's only a couple of states which saw a significant decline in exchange enrollment year over year (and Louisiana's 33% drop doesn't count because they expanded Medicaid mid-year, which cannibalized the exchange pool in a way which should have actually improved the risk pool somewhat, if anything. The same holds true in less-dramatic fashion in New York, where the BHP program cannibalized some of the QHP enrollees as well).

The point here is that thanks to APTC/CSR financial assistance absorbing nearly all of the rate increase for 85% of the exchange population, a risk pool "death spiral" is not likely to happen in most areas...for those below the 400% FPL income threshold.

In other words, roughly 9-10 million individual market QHP enrollees are very likely to stay in the market, because no matter how much full price premiums go up, their portion of it should stay roughly the same year to year. That's the good news (well, good as long as you're OK with the federal government picking up the tab for the balance, which, as a single payer advocate, I obviously have no problem with).

The bad news...and this is where the "Death Spiral is Happening!" crowd have a point...is the unsubsidized portion of the individual market.

According to Mark Farrah Associates (by way of the Kaiser Family Foundation), the total individual market hovered around the 10.5 million mark between 2010 - 2013. In 2014, with the launch of the ACA exchange policies and tax credits, the indy market shot up to 15.6 million people. It continued to grow throughout 2015 and hit 20.2 million in 2016. Of that, I estimate that roughly 2 million or so were enrolled in "grandfathered" or "transitional" policies, which aren't subject to ACA regulations and are not part of the same risk pool which is being debated here. That left perhaps 18 million people total as of last year. On the other hand, Farrah also reported last fall that:

...in which case the actual ACA-compliant portion could be as low as perhaps 17 million. The numbers are gonna vary slightly here and there due to rounding, churn rates from month to month and so on...but regardless, I think you begin to see the problem here. Around nine million subsidized individual market enrollees should be "safe"...but perhaps 8-9 million unsubsidized enrollees are indeed at risk of a death spiral, whether already here or still to come.

So, is that likely to happen (or is it happening already)? Well, according to a report from the Council of Economic Advisors from January (presumably written before Donald Trump took office):

Consumers’ behavior during 2015 and 2016 similarly suggested that this year’s premium increases were unlikely to trigger significant market unraveling. Panel A of Figure 6 examines the relationship between changes in the average benchmark premium in each state from 2014 to 2015 and the corresponding changes in enrollment in the state’s ACA-compliant individual market (including both on- and off-Marketplace plans). For there to be any risk of a death spiral, premium changes would need to have very large negative effects on enrollment, akin to the scenario illustrated by the red dashed line. In fact, there was essentially no difference in enrollment growth across areas experiencing larger and smaller increases in the benchmark premium from 2014 to 2015, as illustrated by the black dashed line. 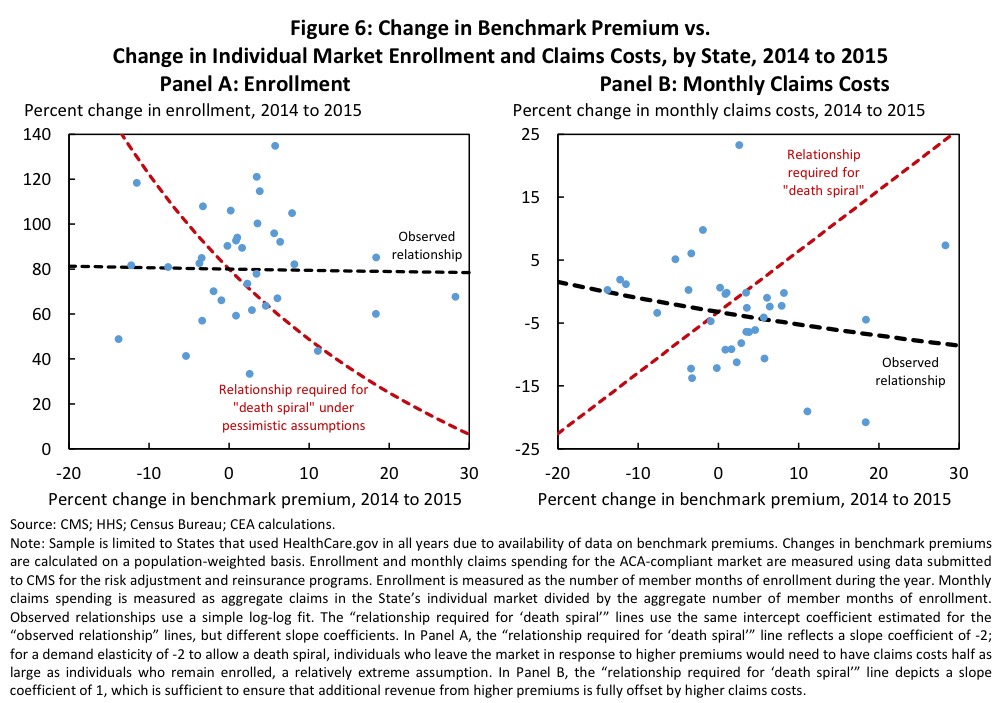 Similarly, Panel B of Figure 6 examines the relationship between the change in the benchmark premium in each state from 2014 to 2015 and the change in average claims costs in the ACA-compliant market in that state. For there to be any risk of a death spiral, increases in premiums would have to result in substantial increases in claims costs (as a result of healthy individuals leaving the market), akin to the relationship between premium and cost changes illustrated by the red dashed line. In fact, consistent with the evidence from Panel A that premium increases did not meaningfully affect enrollment, there is no evidence that premium increases adversely affected the risk pool. If anything, larger premium increases appeared to be associated with slightly slower year-over-year growth in monthly claims costs, as illustrated by the black dashed line.

So far, so good...no death spiral in 2015 or 2016. Unfortunately, it was 2017 where we saw the 25% weighted average rate hike for unsubsidized enrollees. In order to determine whether a death spiral is happening this year, it sounds like we'd need to know 3 pieces of data:

We already know the answer to the first question: While exchange enrollment disappointingly didn't increase and did decrease...it didn't decrease by much nationally (remember, when you include the BHP program in Minnesota and New York, total exchange enrollment only dropped by 1.2% this year, as opposed to 3.7% if you only include exchange QHPs). On that metric, all is well.

Unfortunately, the other two questions are unknowns. Mark Farrah estimates a 1.6% drop from 2015 to 2016...but that was also the first year of New York's BHP program, and I have no idea whether they include BHPs as part of the non-group market. If they don't, then that could explain the drop; NY added 380,000 BHPs the first year. Even if they do include BHPs, both Pennsylvania and Indiana shifted a bunch of people to Medicaid via expansion in 2016 , so I'm not concerned about the 2015-2016 change.

The larger question is what happened this year? The exchange-based enrollment numbers are slightly below 2016...but what about the off-exchange market? As commenter M E has pointed out several times, the ongoing drop in grandfathered and transitional plan enrollees should mean a slight increase in the total ACA-compliant individual market...but what if it's continued to drop? I've read numerous anectdotal stories about people moving to Healthcare Sharing Ministries, for instance, rather than paying full price for ACA-compliant policies. In some cases they're flat-out lying about their religious beliefs in order to do so. Are these a handful of people or a flood?

If the total ACA-compliant market remains in the ~18 million range nationally, it sounds like things should be pretty stable. If, however, the off-exchange market continues to drop from the current ~7 million down to 6 million? 5 million? etc), then that would be what I'd term a "semi-spiral"...you could eventually see the entire individual market consist of those below the 400% threshold only (actually, more like 350% or so I'd guess), with those earning between 350% to, say, 600% or so either paying the mandate penalty, hobbling together Short Term and/or Mini-Med policies, or lying about being devout Christians in order to join a Ministry plan.

There's one other important point here, however: In terms of carrier participation levels, whether or not there's an actual "death spiral" might be a moot point.

However, that's not necessarily the case. As we saw last year in the case of Aetna, profitability itself doesn't necessarily guarantee participation. Aetna pulled out of 11 states, and while they were losing money on the indy market in most of them, there were at least 2 states (Pennsylvania and Florida) where they were making a profit, yet bailed anyway. In fact, in Florida, the only reason they were making a profit in the indy market was because of their exchange business (they were losing money off-exchange).

This is why the situation in states like Oklahoma, Arizona and especially Tennessee are so troubling--when there's only one or two carriers participating in a given county to begin with, they hold a tremendous amount of power, because they can hold counties or even entire states hostage: Give us everything we demand or we're gonna drop out. In fact, if the individual market is only a tiny part of your total business, you may decide to bail anyway, just to avoid the headaches and confusion of dealing with an administration which has openly declared war on that market anyway. In the case of Humana, they didn't even bother issuing any demands--they decided to get the hell out of dodge regardless of what Trump/the GOP does or doesn't end up doing.

The real question is this: If Humana was genuinely concerned about losing money in Tennessee (or any of the other states) next year, why not simply jack their rates up through the roof to cover themselves? If the risk pool really did prove to be that bad, they'd be covered...and if it didn't turn out to be as bad as they thought, the 80/20 Medical Loss Ratio rule would kick in and they'd cut rebate checks out to enrollees to cover the excess, leaving them with a 20% gross margin no matter what. They didn't do that, however; they decided, instead, to just wash their hands of the entire individual market regardless.

Whatever their reasons for doing so, the fact remains that they can do so...because the individual market is such a small part of their business anyway. Which is why I'm calling for managed Medicare/Medicaid contracts to be locked at the hip with participation in the individual exchange. If they want those sweet, sweet, high-profit Medicare Advantage contracts, make them also participate in the ACA exchanges. They can raise their rates by an appropriate amount, sure...but they have to participate.