Republican U.S. Senator John Cornyn just made one hell of a promise.

Earlier today I noted that a bunch of Republican--yes, Republican--governors have chimed in in defense of the Affordable Care Act (or, at least the Medicaid expansion provision). They had a big powwow with GOP Congressional big shots to air their case.

Well, Republican U.S. Senator John Cornyn, the Majority Senate Whip (and therefore one of the biggest shots in the Senate) shot off quite a promise about the concerns regarding up to 32 million people potentially losing their healthcare coverage in the event the ACA is repealed:

One of the top concerns is what will happen to individuals who became eligible for Medicaid with its expansion under Obamacare. The Senate's No. 2 Republican, however, promised that no one who got coverage under Medicaid expansion will lose it.

When Conrnyn was asked if he was concerned about people who've benefited from Medicaid expansion losing coverage, he said it was a shared concern.

"Were all concerned, but it ain't going to happen," Cornyn said. "Will you write that down... It ain't gonna happen."

"You're saying nobody's going to lose coverage?" one asked.

"Nobody's going to lose coverage," Cornyn said. "Obviously, people covered today will continue to be covered. And, the hope is we'll expand access. Right now 30 million people are not covered under Obamacare."

Now, there's several things which could be going on here:

Most likely, of course, Cornyn is referring to whatever Mystery Meat "health insurance policies" the GOP has in mind as a replacement.

Now, here's the thing: When I first saw the "nobody's gonna lose coverage" quote on Twitter, I assumed he was referring to individual market exchange policies, not Medicaid. For the exchange policies, I could easily see Cornyn and the GOP "transitioning" people over to whatever their new junk-policy-mini-med-high-risk-pool-health savings account-sold-across-state-lines talking point mish-mash policies they come up with and then saying "See! We told you no one would lose coverage!"

I mean yes, the new coverage would include pre-existing condition denials, annual lifetime caps, higher premiums for women, no contraception coverage, the ability to drop them on technicalities when they need the coverage most, etc etc...but I could cdertainly see trying to get away with that.

However, this is Medicaid we're talking about. I was a bit surprised by Cornyn promising that all 14 million people covered via ACA Medicaid expansion will continue to remain eligible for the program. Huh. Unless, of course, they strip away what's covered by Medicaid, which is a lot more likely.

Having said that, it's actually the last sentence above which irritates me most of all:

Right now 30 million people are not covered under Obamacare."

As I noted in a popular Tweetstorm a few weeks ago:

@JohnCornyn Well, let's see. 1. The correct figure is more like 27-28 million at the moment, depending on your source, not 30 million. 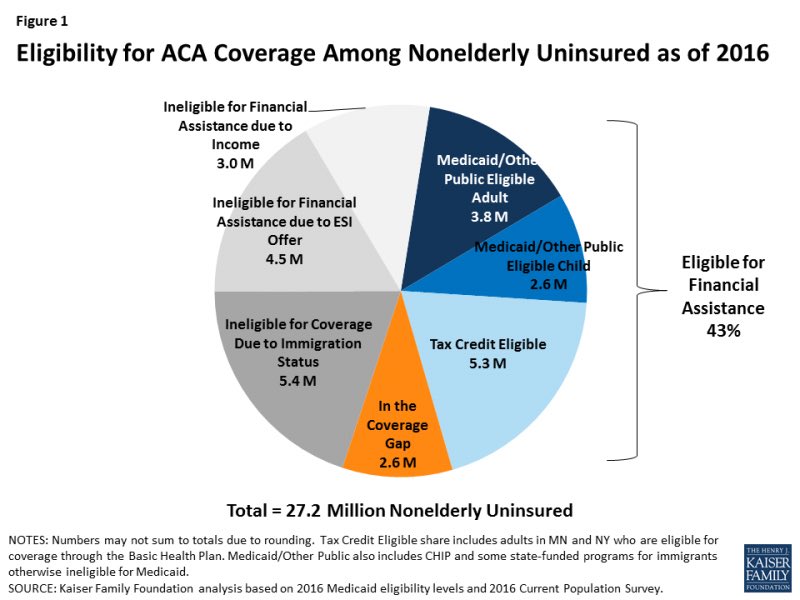 ...but 19 states refused to expand it. Oh yeah, that includes your state, where 684K are screwed due to TX leg. being dicks...

...meanwhile, 5.4 million (20%) are undocumented immigrants. If you'd like to change the ACA to allow them coverage, awesome!

...but somehow I doubt your fellow GOP colleagues would care for that too much. OK, that leaves 3.8 million eligible for...

...traditional Medicaid and 2.6 million eligible for CHIP. glad to hear you're onboard for a huge outreach/education effort! ...

...but since your incoming HHS Sec. opposed CHIP, he might have a problem with helping get millions of poor kids enrolled in it.

...that leaves 12.8 million uninsured. 5.3 million are eligible for financial assistance, but most don't know it. Of course...

...that'd be less of a problem if GOP insurance commissioners weren't doing "everything in their power to be obstructionists".

...meanwhile, another 4.5 million aren't eligible for tax credits because their employer offers them coverage. I agree that...

...ACA should either allow these folks assistance as well or at least be more stringent on the ESI coverage required. Finally...

...there's about 3 million who earn too much to qualify for tax credits. If you'd like to beef up the credits and raise...

...the eligibility threshold, that's an awesome idea. In fact, that was one of @HillaryClinton's ideas. Sounds good to me. /end