As noted in my "Week 7 Plus" December Deadline Snapshot Report write-up, along with the updated State-by-State write-up, while I was dead on target in predicting enrollments up through the original 12/15 deadline at HC.gov, I seriously overestimated the additions who signed up during the 4-day "extension period". I figured it'd be anywhere from 750K - 1.0M; instead it was just 350,000 or so. However, since there are still several million auto-renewals left to be added to the mix, this doesn't necessarily mean anything; it could simply be a half-million or so more auto-renewals instead of active renewals will be added later this week.

I've confirmed 8.8 million QHP selections nationally to date. That leaves almost exactly 5.0 million more enrollees needed to reach this year's target of 13.8 million by January 31st. A pretty tall order, but we can cut that down to size:

Well, the maximum possible number nationally is likely around 9.2 million. I'm basing this on my revised attrition graph from late October, which suggested that there are likely only around 9.2 million people currently enrolled in effectuated ACA exchange policies today. How many of these are via the HC.gov states?

Well, as of the end of March, there were just shy of 11.1 million nationally, of which 8,480,624 were via HC.gov states, or 76.5%. Assuming a similar ratio today, that should mean roughly 7.04 million currently-effectuated enrollees via HC.gov total.

However, 4.31 million of these people have already actively renewed their policies (or actively switched to a different one via the exchange). That likely leaves about 2.73 million people who are a) currently enrolled in an effectuated HC.gov policy but b) didn't actively renew their policy by the 12/19 deadline. I presume all 2.73 million of them will be automatically renewed in the next few days.

Adding these to the mix, plus perhaps another 70K to cover the missing days out of California and the other state exchanges should bring the grand total up to around 11.8 million.

If so, that means the HHS Dept. and the state exchanges need to target 2.0 million more new enrollees nationally to sign up in the next 40 days.

So, to summarize, assuming everything above is fairly accurate:

UPDATE: OK, after crunching the numbers further, a 13.8 million final tally is looking far less likely than I was already suspecting. Based on the known enrollment numbers to date (and their category breakout), it looks like there's likely only around 2.2 million auto-renewals left on the federal exchange (HC.gov), not 2.7 million:

There are 3 categories of enrollees for each state: Active Renewals, Auto-Renewals and New Enrollees. In some states I know all three; in some only one or two; and in two states (New York and Vermont) I don't have any enrollment data whatsoever. I've broken it all out as best as I can in the table above.

For NY and VT, I'm assuming they've enrolled around 65% of my total targets to date (which is about where the national enrollment is so far), and then assume that 80% of those are renewals vs. 20% new enrollees. The same assumptions hold true for a few other states where I do know the actual total enrollee number, like Idaho, Maryland and Minnesota.

Let's assume I'm correct that there's only 9.2 million effectuated enrollees nationally at the moment, and that 95% of them end up renewing, either actively or passively (auto-renewals). That's 8.74 million total renewals. Of those, I've already accounted for about 6.52 million, which leaves only 2.22 million more to be plugged into the HC.gov states.

If so, that brings the grand total up to around 11.2 million enrollees starting on January 1st...which means that another 2.6 million new enrollees would still be needed, around 600K more than I prevoiusly figured.

Again, seeing how there were only 1.42 million new people added in the 2nd half of last year's enrollment period, incresaing that by over 80% seems unlikely. Matching it would bring the grand total to around 12.7 million...or almost precisely the same total as last year.

I've also looked at the current situation from a different angle. When I made my original 13.8 million national enrollment projection, I also took a shot at breaking it down state-by-state. Assuming the enrollments follow a similar pattern to last year (ie, the big spike at the mid-December deadline, followed by HC.gov auto-renewals being added in one shot, followed by much slower progress after that until the 1/31 deadline approaches), total enrollments should have hit around 65% of that 13.8 million projection...or around 9 million people without those HC.gov auto-renewals, which, as it happens, is exactly where things stand at the moment. Any state falling below 65% at the moment is below where I'd expect it to be...and any below 60% is falling significantly short.

With that in mind, I've adjusted my projected totals to ensure that every state has reached at least the 60% mark prior to auto-renewals being added in. This means lowering my projections for 17 states. Doing so lowers my national projection to around 13.36 million people by the end of January.

In short, unless there's a massive new enrollee surge coming up at the tail end as people panic over the Trump/GOP repeal efforts (which is certainly possible), I have to revise my projection for total enrollments down to somewhere between 12.7 - 13.4 million people. 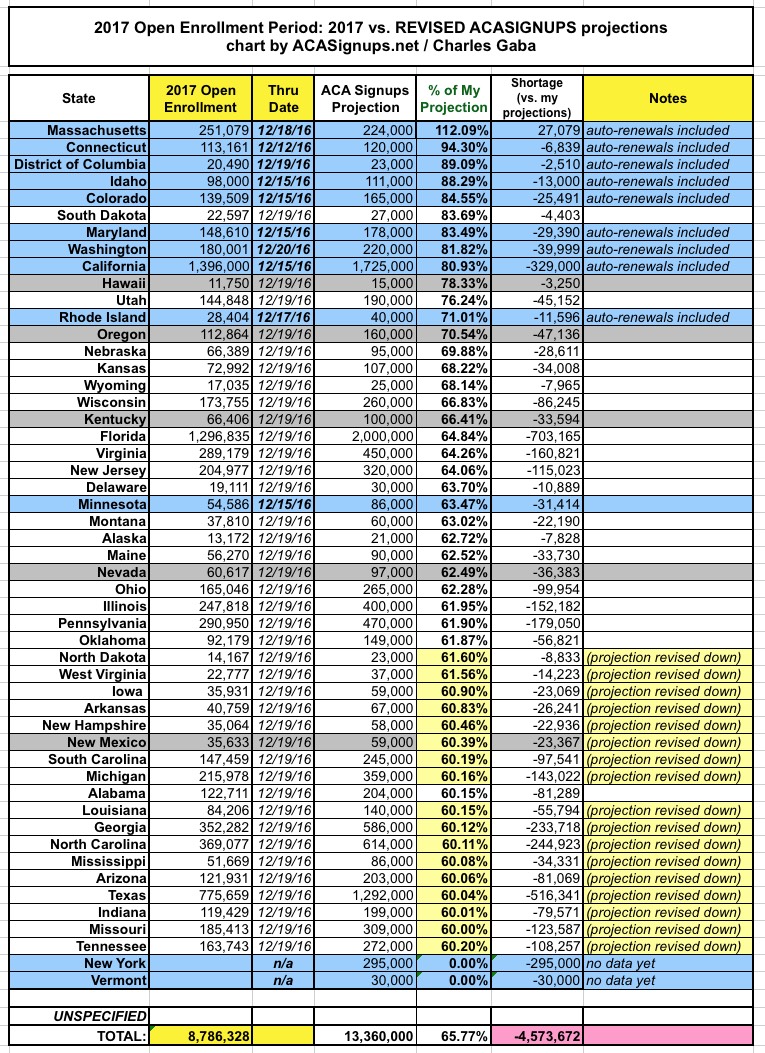