Time to check in on exchange SEPs/Attrition Rates...

I've written a lot in the past about off-season exchange enrollments, otherwise known as SEPs (Special Enrollment Periods). For the most part, SEPs refer to people who enroll in individual policies after the official Open Enrollment period. They're allowed to do so for a variety of reasons: If they move outside of their rating area; if they get married or divorced; if they give birth or adopt a child; if they get out of prison; if they're discharged from the military; or, in most cases, if they lose whatever current healthcare coverage they have due to losing a job, etc.

Over the past 3 years I've estimated that somewhere between 7,000 - 9,000 people sign up for ACA exchange coverage via SEPs every day during the off season, and I've been proven pretty much dead on target on the rare occasions that hard data has been released. Now, that may have dropped somewhat this year since CMS has cracked down on verifying SEP eligibility, but that's still an uknown. Every time someone selects a QHP via one of the ACA exchanges, the official 12.7 million tally for 2016 continues to go up.

At the same time, there has obviously been a lot of of attrition as people drop their policies throughout the year. The official effectuated enrollee number as of March 31st was down to 11.1 million people...a 13% drop from the 12.7 million who had selected QHPs as of the end of January.

Most of this was due to roughly 10% or so of enrollees never actually paying their first monthly premium...and therefore never being enrolled at all in the first place.The other 3% or so, however, consist of either people kicked off their policies due to legal residency verification issues or who deliberately cancel their policies (or simply stop paying the premiums). Since the carriers are required to cover enrollees for a couple of months after they stop paying (unless the enrollee actively cancels their policy), that means that a) the carriers are upset about potential gaming of the system and b) that there's often a delay of up to 2 months before those "drop-outs" actually show up on the data radar.

This makes it much trickier to track attrition rates...but with two years' worth of data under my belt now, including occasional (quarterly, for the most part) hard numbers being released, I've put together what I think is a fairly accurate representation of where things stand and how they should play out for the rest of 2016.

Unfortunately, I can't really use the 2014 attrition rate to compare with for a couple of reasons: First, the 2014 Open Enrollment Period as was 6 months long plus an extra 2 week "overtime" period. Second, the first couple of months of that was pretty chaotic, meaning that huge numbers of 2014 enrollees didn't even enroll until the tail end (late March/early April), so a whopping 40% didn't even have their policies go into effect until April or May.

For 2015, like the 2016 season, the start and end dates were shifted 2 weeks later, and there was also a one week "overtime" period, as well as a one-time 2 month "tax filing period" SEP which around 214,000 more people took advantage of, neither of which will happen this year. Even with all of that, however, The 2015 season was much closer to the 2016 season, so this year should follow a similar pattern in terms of off-season enrollments and attrition.

Assuming this is the case, here's what things should look like.

Assuming an even spread between the quarters, here's what the net attrition rate should look like this year: 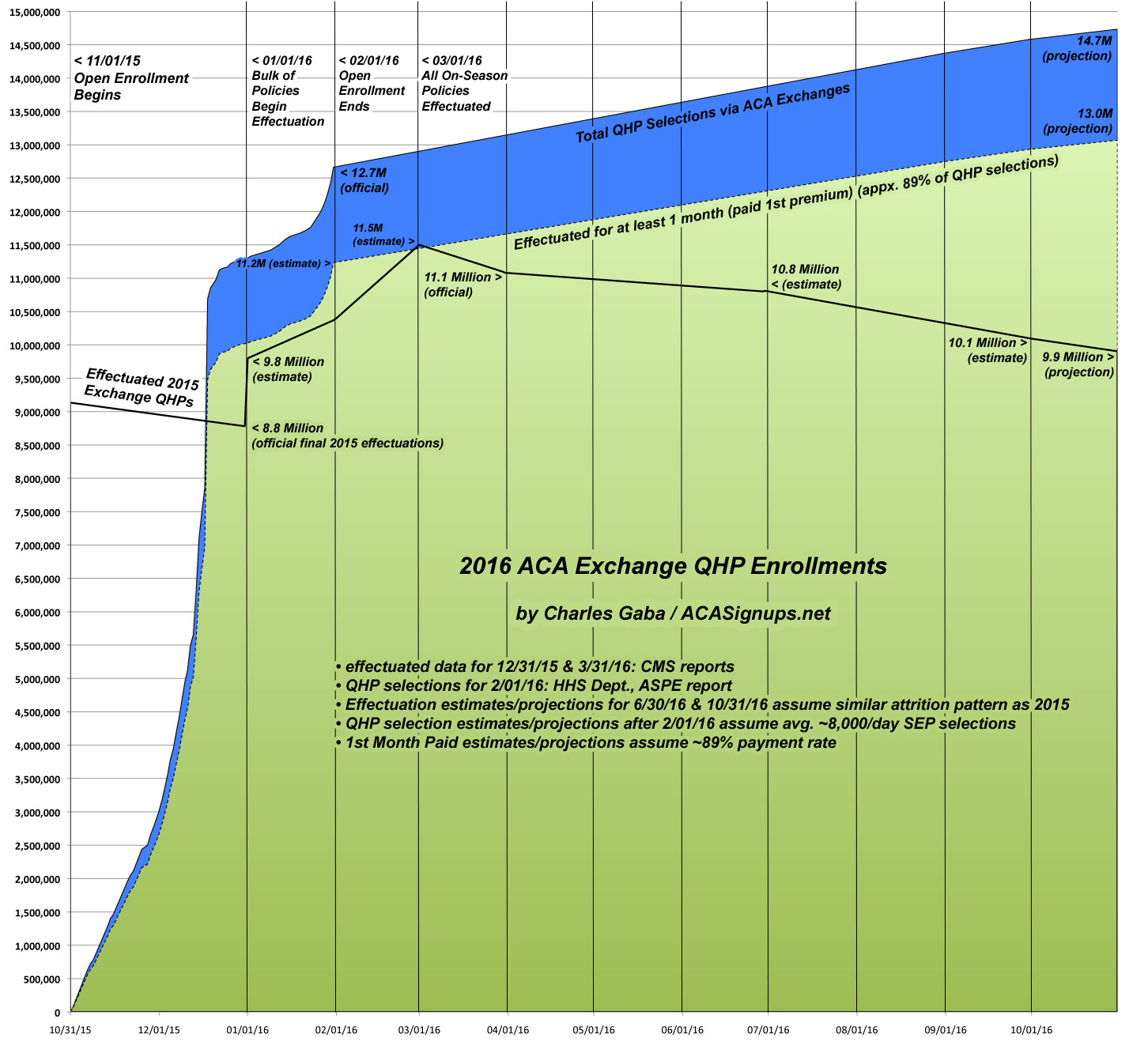