The HHS Dept. is very much aware that they have got to get more millennials enrolled in ACA-compliant individual healthcare policies this season; the exchange risk pool has been hovering at around 28% 18-34 year olds for three years running, when the conventional wisdom among those who know more about such things is that they need that number to be somewhere closer to 40% to stabilize the market.

Now, there's a lot of reasons why more young people aren't signing up, including affordability, which of course is the main reason HHS is trying to get more of them to sign up in the first place, creating a bit of a Catch-22. In addition the very "19-25 year olds allowed to stay on their parents plan" provision of the ACA is itself cannibalizing several million potential ACA exchange enrollees, creating some additional irony, since most of those "sub26ers" are presumably enrolled in the employer policies of their parents. Some of these reasons are completely outside of HHS's control

However, there are other barriers to young people signing up...and today CMS announced a whole mess of provisions designed to address the areas they do have some control over. I have no idea how effective these efforts will be, but you can never underestimate the impact of a strong marketing/outreach campaign, and as a website developer by trade, the first section below gets a big thumbs up from me:

Today, as the White House convenes the Millennial Outreach and Enrollment Summit, the Centers for Medicare and Medicaid Services (CMS) announced additional initiatives to reach young adults during Open Enrollment and help them find affordable coverage through HealthCare.gov. Young adults had the highest uninsured rates before the Affordable Care Act and have seen the sharpest drop in uninsured rates since 2010. Yet millions of young adults remain uninsured, showing that there is more work to do to equip younger Americans with the tools and information they need to access coverage through the Health Insurance Marketplace. Today, we are announcing new strategies, new tools, and new partnerships to reach young people and help them get covered.

“More than 9 in 10 Marketplace-eligible young adults without health insurance have incomes that could qualify them for tax credits to make plans affordable, but that fact hasn’t fully penetrated the millennial community, and we want to change that,” said Kevin Counihan, HealthCare.gov CEO. “This year, we’ll be using new tactics and strategies to reach young adults where they are and deliver the message that they have affordable coverage options. These new tactics will both benefit young Americans and strengthen the Marketplace risk pool.”

For the first time, Open Enrollment outreach will take advantage of online platforms that cater almost exclusively to young adults. Today, we are announcing the first of these new efforts: outreach utilizing Twitch, a social video platform and community for gamers. This effort will feature HealthCare.gov pre-roll before videos, a homepage takeover, and ongoing efforts with streamers on Twitch to amplify our message throughout Open Enrollment. Twitch currently attracts close to 10 million daily active users who, on average, spend 106 minutes per person per day on the site. According to ComScore, Twitch’s core demographic of 18-34 year-olds have above average uninsured rates.

According to ComScore, 1 in 5 millennials access the internet exclusively through mobile devices. Last year, consumers could easily enroll in coverage at HealthCare.gov through mobile devices, but if they wanted to actually shop around and compare plans, the mobile interface could be difficult and time consuming. This year, consumers will find an end-to-end, mobile optimized experience, including a new state-of-the-art shopping process that for the first time offers improved ability to comparison shop on their phone or tablet. Rather than clicking on tiny boxes or zooming in on hard-to-read screens, consumers will now find intuitive navigation and a streamlined interface to compare plans. 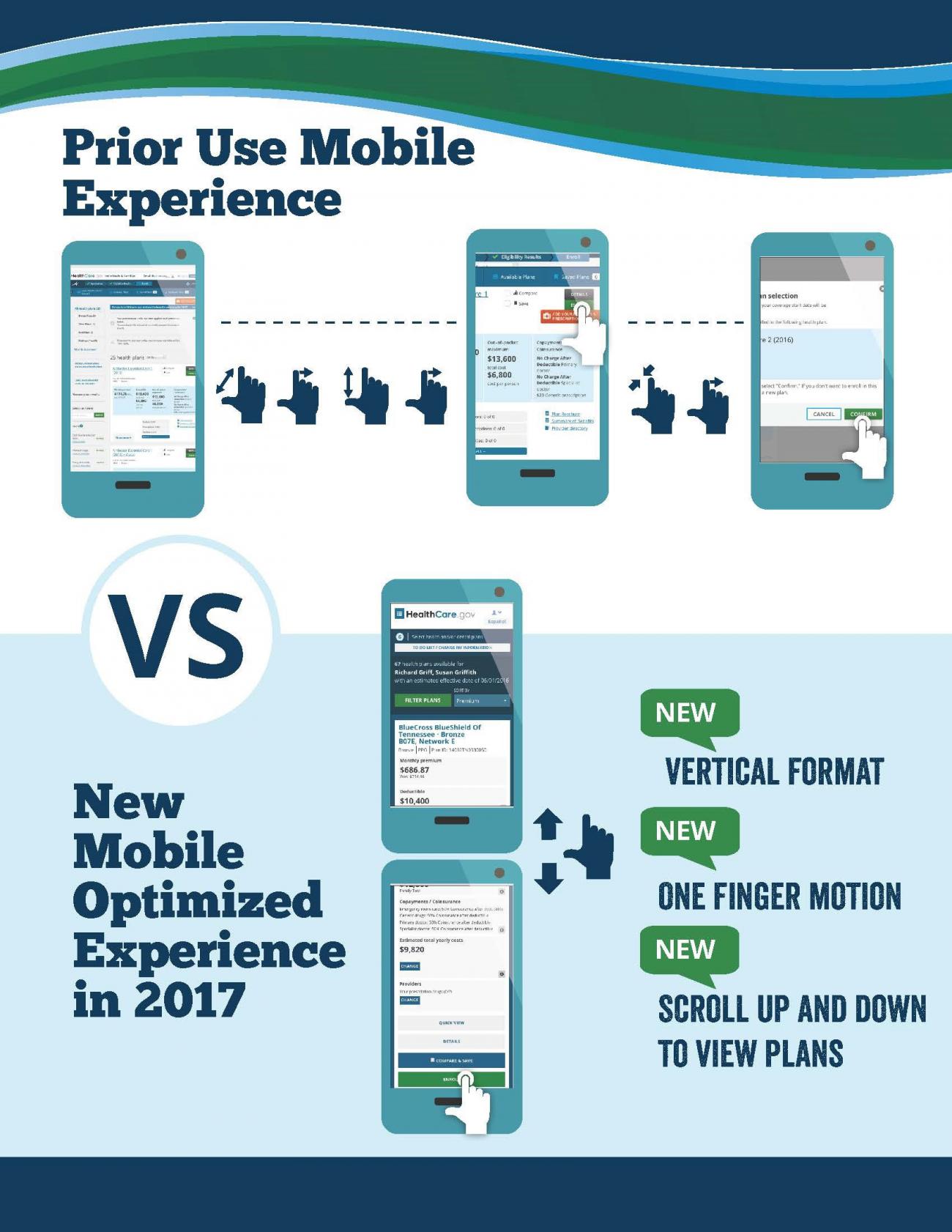 During 2017 Open Enrollment, CMS and stakeholders will organize a young adult social media outreach campaign under one umbrella: #HealthyAdulting. As part of this coordinated campaign, longstanding Open Enrollment partners will be stepping up their social media engagement and will coordinate with each other to maximize the impact of that social media work in driving enrollment. CMS will be joining with partners to communicate with young people on the digital platforms they prefer – including Facebook, Twitter, and Tumblr – and engaging in a conversation under a unified #HealthyAdulting message about issues young people care about, whether that’s mental health, women’s wellness, reproductive health, or diabetes prevention.

Collaborating with Federal Partners and Programs

As we get closer to Open Enrollment, we are also working with federal partners to reach people enrolled in their programs who may need and want Marketplace coverage, with a particular focus on reaching young adults. Today we are announcing two new efforts:

The Department of Defense will include information about the Marketplace in the Transition Assistance Program, Transition GPS (Goals, Plans, Success) curriculum; more specifically, in the Personal Financial Planning module. The program, run through the Defense Transition Assistance Program Office, will inform transitioning Service members about health insurance options for their family, including HealthCare.gov coverage and possibility of qualifying for Marketplace financial assistance. Since this course is continually being offered, many Service members will lose their military coverage outside of Open Enrollment but would be eligible to sign up for Marketplace coverage through a special enrollment period. Approximately 200,000 transitioning Service members, many of whom are under the age of 35, will receive this information annually.

In addition, as previously announced, the Internal Revenue Service will conduct new outreach this year to uninsured people who paid the individual responsibility penalty or claimed an exemption, letting them know that tax credits are available for Marketplace coverage and providing information about their health coverage options. Young adults are overrepresented among those who paid the fee: about 45 percent of taxpayers paying a penalty or claiming an exemption were under age 35, compared to about 30 percent of all taxpayers in 2014. Experts have suggested reaching out to those who paid the fee or claimed an exemption to make sure they are aware of their options to enroll in coverage, an approach already implemented in Massachusetts.

Getting Ready for Open Enrollment

We’re putting the finishing touches on our plans for Open Enrollment 4. Between now and November 1, you’ll see a series of announcements from us about what’s new, what’s better, and what to expect during this Open Enrollment – including new tools for consumers, new outreach tactics and targeting strategies, and more information about continued access to affordable coverage. Today’s announcement is the first in this series.

Americans can sign up for affordable health plans that meet their needs and their budgets at HealthCare.gov or their state Marketplace websites beginning November 1. Open Enrollment runs through January 31, 2017. Health coverage can start as soon as January 1, 2017 for consumers who sign up by December 15, 2016.