Oh, yeah...meanwhile, the uninsured rate has dropped to a historically-low 8.6%.

Given all the ugly ACA-related news over the past month or so (carriers dropping out of markets, average rate hikes going up significantly), it's important to remember the positive impact of the law as well...and today's early release of the latest National Health Interview Survey is very, very good news indeed:

Whenever Gallup releases their quarterly survey re. uninsured rates, I always make sure to note that as accurate as their methods may be in other ways, one major flaw of Gallup's methodology is that they don't include children under 18 whatsoever. This is no small gap, either, since a) children make up about 1/4 of the total population and b) children have historically had a significantly lower uninsured rate than adults (thanks, in no small part, to the Children's Health Insurance Program, spearheaded by Hillary Clinton, I might add). The NHIS, however, includes everyone...and breaks the data out in a whole mess of different ways. Here's what they have to say; note that all data from this survey was as of January - March 2016, so any changes since then (like, say, Louisiana expanding Medicaid to over 278,000 people) is not reflected in it yet):

Yup, the 2016 Open Enrollment Period (along with continuing Medicaid expansion and, to some degree, the ongoing economic recovery) has shaved another 1.3 million off the uninsured tally.

As I said, Gallup's 11.0% figure from Q2 doesn't include the kids. Add them in and the overall figure drops further.

The total number of people enrolled in effectuated ACA exchange policies increased by 894K people from 3/31/15 - 3/31/16 (10.2M to 11.1M), but in thsi particualr subsample, children aren't included by NHIS, which likely explains most of the missing 294K.

Ugh. OK, now that's definitely not good news IMHO. I know HDHPs make sense for some people, and it's certainly better than having no coverage whatsoever for others, but let's be honest, no one's happy about having a $5,000+ deductible.

You can read the other data-nerd goodness at the report itself, but I did want to make a couple of points:

NOTE: Yes, I'm aware that the NHIS had the uninsured rate lower than 16% in 1997 (15.4%) and 2005 (14.2%); the only reason I'm not including them below is because there are too many years missing in between. This is just a quick visual to note the trend as well as what the breakout is among nearly half the remaining uninsured: 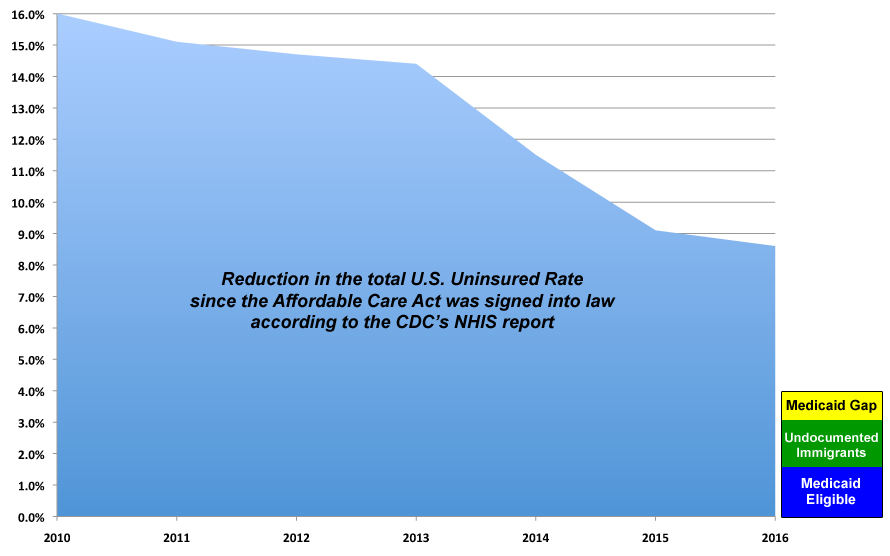