California: ACA's Emergency Room impact positive or negative depending on your POV

According to the Kaiser Family Foundation, California averaged around 7.8 million Medicaid/CHIP enrollees prior to the ACA; this number has since shot up about 58%, to 12.3 million people.

One of the chief arguments in favor of the ACA has always been that uninsured people tend to not get treated for ailments/injuries at all (for obvious reasons), and then end up going to the emergency room when that gangrenous foot leaves them no choice. Not only does this end up costing much more to treat, the hospital is also stuck footing the bill (no pun intended) since the uninsured also tend not to have any money to pay out of pocket either (if they did, the odds are that they'd have some form of insurance, after all).

The idea was that by expanding Medicaid and offering financial assistance to help people buy private insurance policies, the load on emergency rooms would be lightened in two ways: A reduction in the actual number of visits (as people get covered, hopefully they'll use that coverage to make a regular doctor's appointment to hopefully prevent emergencies from happening in the first place); and a reduction in the number of case of hospitals being stiffed for the bill.

A new graph just sent out by the California Office of Statewide Health Planning & Development (hat tip to Charles Ornstein) lends some insight as to how that's been working out in practice: 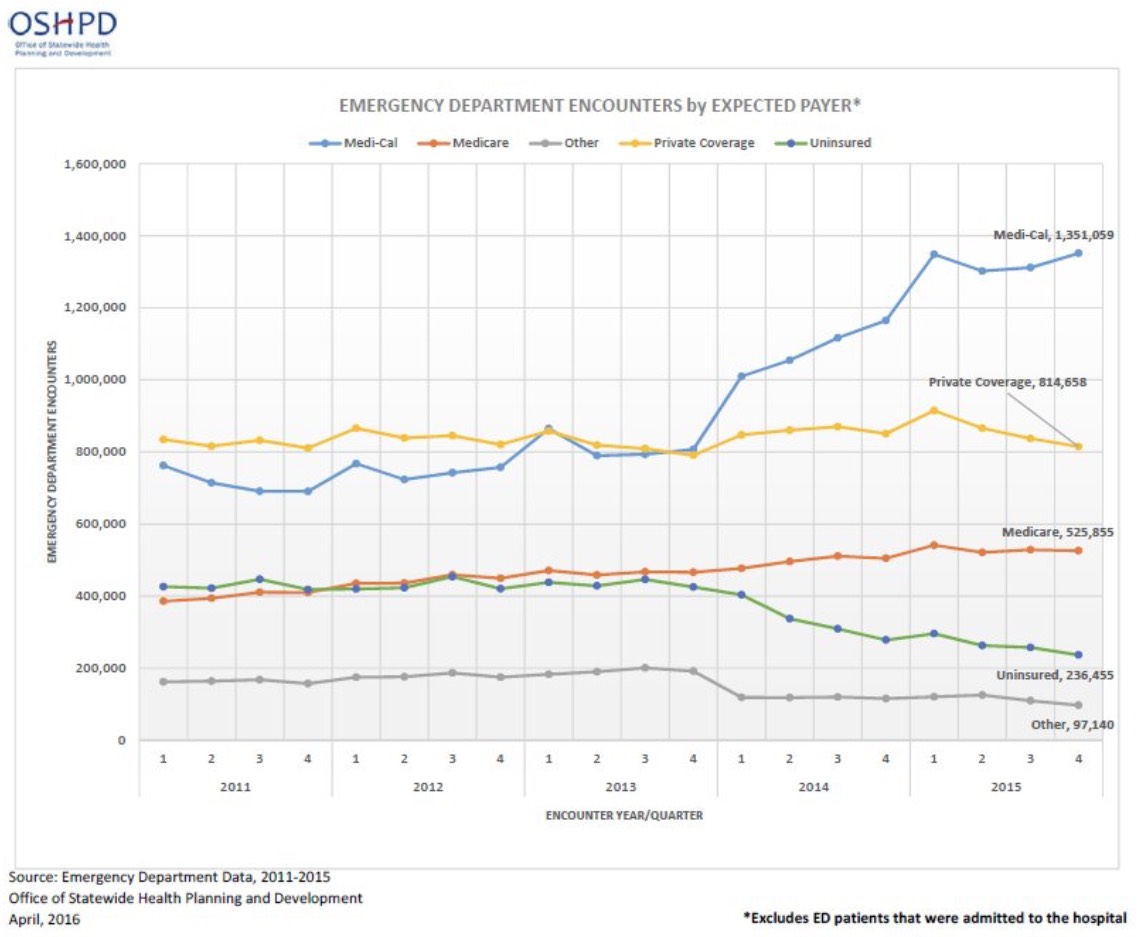 The only hard numbers shown are the one from Q4 2015,but the earlier numbers can be estimated pretty closely. The obvious starting point here is Q4 2013...the last quarter before the ACA's Medicaid expansion (and exchanges for private policies) went into effect.

Between Q4 2013 and Q4 2015, the number of emergency room visits ("Emergency Department Encounters") in California changed roughly as follows:

The change of each in hard numbers and percentage-wise:

California had about 38.43 million residents in 2013, which went up to around 39.14 million as of July 2015, or 1.8%. Let's figure around 2% even over that two year period. This suggests that privately insured enrollees haven't been impacted one way or the other by the ACA, but slightly impacts the other categories.

Medicare enrollment in California went up from 5.302 million to 5.644 million over those 2 years, or 6.5%, so I'm not sure what accounts for the 21% increase in ER visits. Then again, the ACA's impact on Medicare is less direct for the most part (aside from fixing the Part D "donut hole"), so I'm not even gonna try to touch that one.

That leaves Medicaid, Uninsured and "Other Coverage". I'm assuming the "Other" drop is mainly due to people being transferred over to Medicaid from other state-run programs; assuming this is the case, that cancels out around 98,000 of the Medicaid increase.

This leaves us with the following:

That's a decrease of 174,000 uninsured ER patients...and assuming the vast bulk of these folks were low income/poor, that likely means a good 170K or so fewer uncompensated ER visits, which is a good thing.

Another way of looking at this which takes population growth into account: In 2013 there was 1 Medicaid-covered ER visit for about every 9.6 enrollees; in 2015 this was up a bit to 1 for every 9.1 enrollees:

On the surface, this makes it sound like the ACA is only achieving one of it's two ER goals: Reducing the number of uncompensated visits. On the other hand, it's entirely possible that a lot of those 320,000 additional ER visits were people who have been suffering from nasty ailments for many years but who didn't dare even go into th emergency room to have them treated.

Assuming CA's numbers are representative nationally, I'd call this 1.5 out of 2 points.