NOT Breaking: CBO confirms pretty much what both HHS & I have been saying since October

The Congressional Budget Office released their latest massive 225-page 10 year economic outlook report today. Obviously there's a ton of stuff there, but the part of most interest to me is, of course, their revised projections for ACA-related matters, both in terms of people and dollars.

Last March, they were still inexplicably projecting that a whopping 21 million people would sign up for ACA exchange policies...actually, even more than that, since 21M was projected to be the average enrolled per month. In order to achieve that, the actual enrollment tally would have to be several million higher since a) around 20% of enrollees wouldn't be signing up until after the January deadline (meaning they won't have coverage start until February or March) and b) general attrition via non-payments and drop-outs throughout the year. A good half of the increase over their projection of 11 million people for 2015 was based on the assumption that roughly 5 million additional people will shift from employer-sponsored insurance over to ACA exchanges: 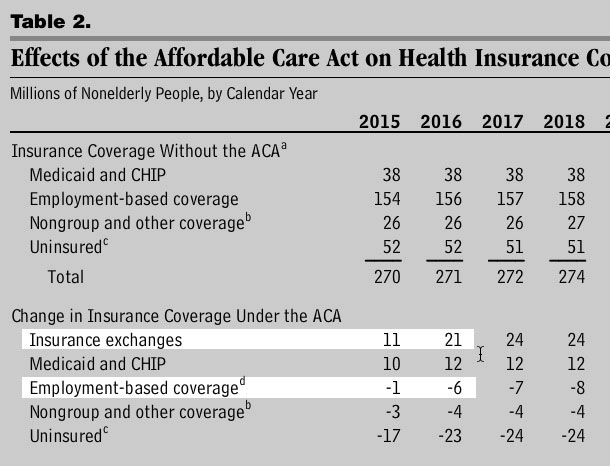 Last summer I projected that the actual monthly average enrollment for 2015 would come in at more like 9.5-9.7 million people (click the chart for a higher-res version):

According to today's CBO report (page 16), the actual monthly average was roughly 9.5 million:

In the March 2015 baseline, CBO and the staff of the Joint Committee on Taxation (JCT) projected that an average of about 8 million people per month would receive exchange subsidies in 2015. Additionally, the agencies projected that about 3 million people would not be eligible for subsidies but would purchase coverage through an exchange, for a total of 11 million people enrolled in coverage through exchanges in any given month, on average. CBO and JCT now estimate that about 9.5 million people enrolled in coverage purchased through the exchanges, on average, during 2015 and that 8 million of those enrollees received subsidies.

Medicaid spending is expected to increase by $31 billion (or 8.8 percent) in 2016; the projected rate of growth in outlays is a little over half the average rate of growth recorded over the two previous years, primarily because the optional expansion of coverage authorized by the ACA will have been in place for two years and the rapid growth in enrollment that occurred during the initial stage of the expansion will have begun to moderate. CBO projects that under current law, total enrollment in the program will increase by about 2 percent in 2016, about a third of the rate of increase in 2015.

Similarly, subsidies that help people who meet income and other eligibility criteria to purchase health insurance through exchanges and to meet their cost-sharing requirements, along with related spending, are expected to increase by $18 billion in 2016, reaching a total of $56 billion. The higher spending reflects an anticipated increase in the number of people expected to receive subsidies for coverage purchased through exchanges. CBO and the staff of the Joint Committee on Taxation (JCT) estimate that about 11 million people will receive exchange subsidies, on average, during calendar year 2016, compared with an average of 8 million in 2015. Additionally, the agencies project that about 2 million other people will purchase coverage through an exchange but will not be eligible for subsidies—for a total of 13 million people, on average, enrolled in policies purchased through exchanges.

OK, so 13 million people on average per month, of whom around 11 million (85%) are expected to qualify for APTC subsidies. How does this compare with my own estimates?

Well, let's look at how the first two years went:

What is interesting to me is that unlike several prior CBO budget projections, this one doesn't include the 10-year enrollment outlook table.

UPDATE: For some reason, this update from the CBO was making big headlines yesterday. I honestly have no idea why since, as noted above, this is exactly what HHS has been saying since last fall. Whatever...