Last year, to my everlasting joy, the HHS Dept. finally started issuing not just big, bulky monthly ACA exchange enrollment reports but also began issuing simple weekly enrollment "Snapshot" reports, giving just the "top line" number of people who had selected Qualified Health Plans (QHPs) in the preceding week. The first few weeks they only gave out the national total, but a few weeks in they started breaking it out by state (and, eventually, even by major metropolitan areas).

The irony here is that if they had started doing exactly this in the first place back in 2013 (just the QHP tally per state on a weekly basis, nothing more than that) I almost certainly never would have bothered tracking ACA enrollments myself, and thus this website/project never would have started at all.

I don't know for certain that they'll continue to do the "Weekly Snapshot" reports this year, but I'm pretty sure they will. If so, then standard operating procedure from last year was to release the report on the Wednesday following the week in question. If so, then the Week One Snapshot Report should be released this Wednesday; (note: thanks to farmbellpsu for reminding me that, as Wednesday is Veteran's Day, the odds are that the first snapshot report will likely be held back until Thursday); the Week Two report next Wednesday and so on.

With that in mind, here's my own very rough estimate. Bear in mind that as of today, I have only confirmed 8,737 QHP selections, from two states, covering just 3 days and one hour respectively:

Seriously, those are the only hard numbers I've confirmed so far. Still, as noted in the links above, a simple extrapolation based on the relative QHP-enrollment populations of these two states alone suggests that QHP selections could potentially have reached as high as 80,000 the first day and a whopping 800,000 in the first three days. It's even conceivable that total QHP selections have already reached as high as 2 million people in the first week, assuming something like 80K on 11/01, 360K/day during the week and another 80K yesterday (11/07). However, that strikes me as as being extremely overoptimistic.

My initial rough projection assumed around 410K QHPs in the first week. However, I later realized that last year, HealthCare.Gov reported 462,000 QHP selections in the first week! Since HC.gov only enrolls about 75% of the national total (the rest are via the state-based exchanges), that actually translated into more like 600,000 nationally during the first week for 2015's open enrollment period.

Assuming roughly a 25% QHP selection increase this year (at least, that's what I'm assuming), that would translate into around 750K nationally, 570K of which would be via HealthCare.Gov, but I'll be a little cautious and drop it back to at least 720,000 QHPs in Week One nationally, 550,000 via HealthCare.Gov. 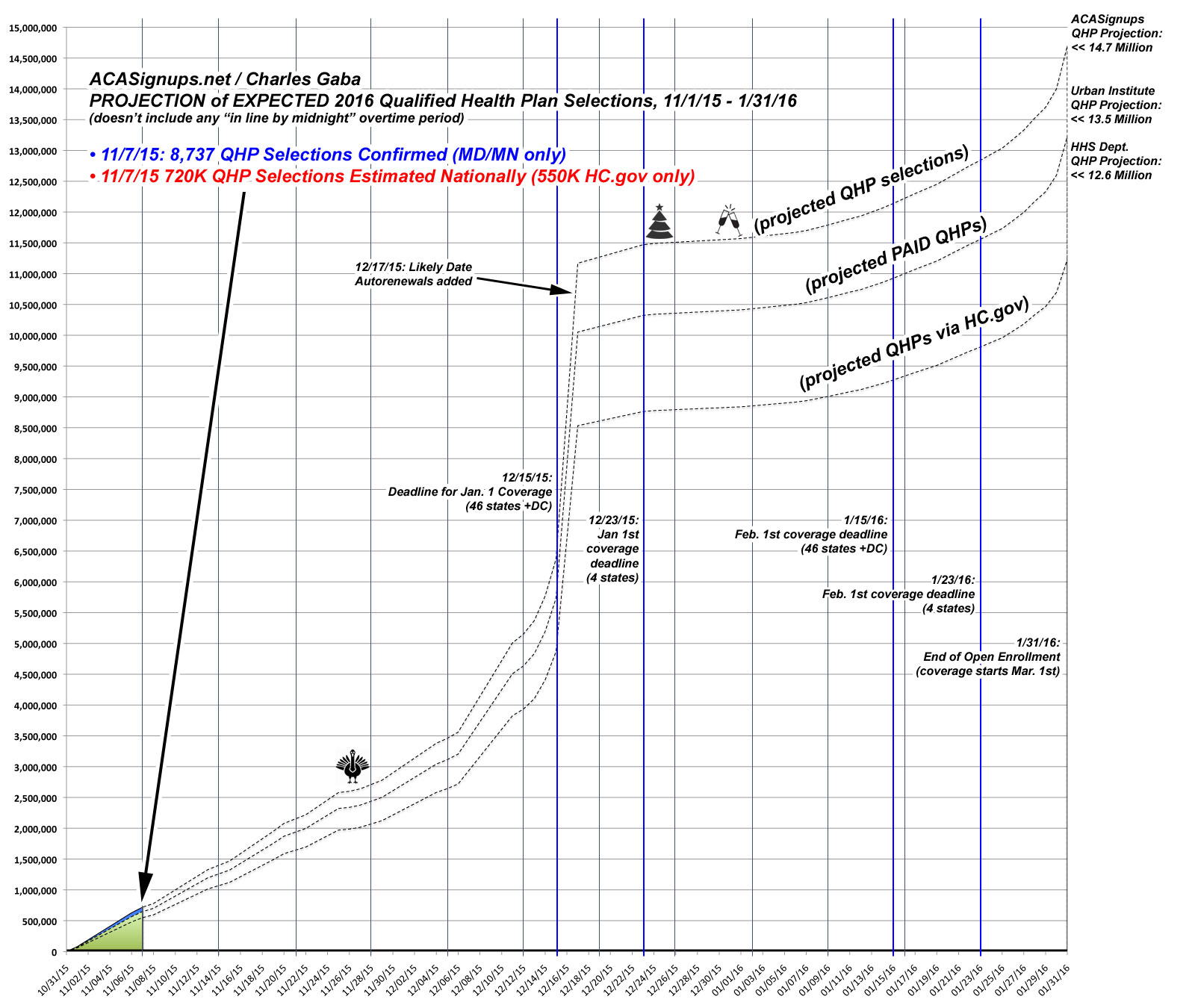 Assuming I'm fairly close for the first week, here's how I see the rest of 2015 playing out nationally (if I'm significantly off, of course, I'll make adjustments as appropriate):