As explained in the first link above, I've still been able to piece together rough estimates of the low, mid-range and maximum possible requested average rate increase for the Arkansas individual market. Note: While the table & methodology for Arkansas are the same as most of the other states I've posted on, there's one important difference here; see below for details: 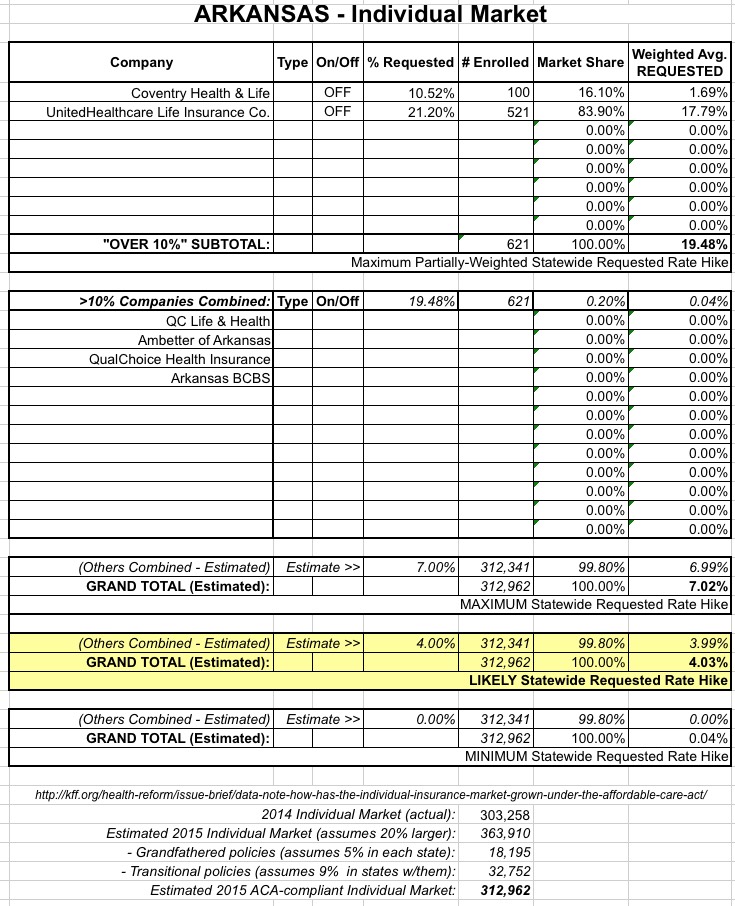 For one thing, only two companies have requested rate increases higher than 10%: Coventry and UHC (10.5% & 21.2% respectively).

For another, the actual enrollment in those companies' policies (both of which are off-exchange only) adds up to only 621 people between them...out of what's likely over 300,000 people in the individual market. In other words, virtually all of Arkansas' individual market insurance providers are requesting increases of less than 10%.

Of course I have no idea what those hike requests actually are...just that they're under 10%. In some cases, of course, they may be rate decreases.

My standard rule of thumb for other states in this situation has been to assume a 7% weighted average for companies whose requests I don't know, maxing out at 9.9%. However, for Arkansas I'm making an exception, based on this tweet from Arkansas Times healthcare reporter David Ramsey:

.@charles_gaba There were no >10% requests. Is that what you meant? (that's all we know, but rumor is they're gonna be close to flat again)

By "again", what Ramsey means is that for 2015, the average rates in Arkansas actually dropped by about 2% or so on average. He's saying that this year, rumor has it that any increases will be nominal at most (when weighted by market share, metal level, etc of course), which is right in line with the above.

Therefore, instead of using 4% as my lowball estimate, 7% as the mid-range and 9.9% as the high-end for unknown companies, I'm dropping this to 0%, 4% and 7% instead...meaning that for Arkansas, I'm estimating an overall weighted average rate increase (requested only) of around 4%.