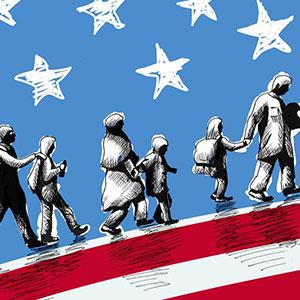 Immigrants disproportionately lack coverage, making up 23% of the total uninsured despite comprising only 6.6% of the U.S. population. That’s millions of people who are being failed by a government that restricts their eligibility for public health insurance programs. Particularly considering policymakers' increased focus on racial equity, and given that 9.8% of Black people, 66% of Asian Americans, 24% of Native Hawaiians and Pacific Islanders, and 33% of Hispanics were born outside the U.S., it is essential for the country to address immigrants’ access to coverage.

Why So Many Immigrants Are Uninsured

Uninsured immigrants face a confusing and complex system of rules determining their eligibility for health insurance programs. While ACA coverage is available to all lawfully present immigrants (with the unjust exception of DACA recipients), Medicaid and CHIP present a confusing web of eligibility rules that vary based on a person’s:

Undocumented immigrants aren’t eligible for the major federal health programs, with the exception of Emergency Medicaid, which covers emergency services for immigrants ineligible for full-scope Medicaid. These immigrants may also receive services at free clinics, like federally qualified health centers, that take all patients regardless of immigration or insurance status.

With this mess of rules, on top of the existing complexity of applying for public benefits, it’s no wonder that only 74% of eligible immigrant children participate in Medicaid, compared to 92% of U.S. born kids. Enrollment assisters report that many families don’t apply for health insurance due to confusion about their eligibility - or if they do apply, have trouble verifying the information needed to get coverage.

Many immigrants also fear that enrolling in public health insurance programs will affect their immigration status due to rumors and misinformation. Particularly in the wake of the now repealed Trump public charge regulation, many immigrant families have avoided public assistance programs, even during the pandemic.

Thanks to decades of advocacy and organizing by immigrant rights and health care groups, states have made remarkable progress in expanding access to coverage. In the past year alone, California, Illinois, Washington, Colorado, Connecticut, Oregon, Maryland, and New York took steps to extend coverage to some or all immigrants who have been excluded. Maine, Rhode Island and Vermont also expanded access to coverage for children and/or pregnant people in recent months. This reflects a growing recognition, magnified during the pandemic, that providing coverage to all residents is essential in protecting public health. But a patchwork set of policies that relies on state funding is insufficient. The federal government, with its much stronger fiscal power and interest in eliminating racial and economic disparities in access to care, needs to step up.

However, given the slow nature of congressional action, the Biden administration can take some important steps now. For example, HHS could make hundreds of thousands of DACA recipients eligible for ACA coverage through regulatory action. It could also build on its existing investment in outreach and assistance programs to fund more Navigators and other community organizations that are best suited for immigrant-focused enrollment work.

A March 2021 ASPE report excluded undocumented immigrants from its uninsured estimates because they aren’t eligible. That isn’t acceptable. To achieve real progress on the remaining uninsured, the administration must include immigrants in the narrative. As we’ve been reminded so starkly during the past few years, our health is interconnected. It is time for policy makers, working with advocates, health care providers, community members and researchers, to ensure access to care for everyone, no matter where we were born.