Updated x2: Strange Things are Afoot at the Oakland U. 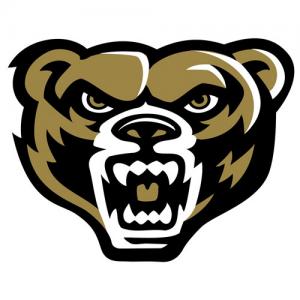 A few years ago (just before the COVID-19 pandemic hit U.S. shores), I posted a lengthy, wonky entry about healthcare plans for college students and how they're a perfect example of how dramatically one insurance risk pool can vary from another.

This post was very personal for me because it was inspired by my own family moving from an ACA exchange individual market policy over to the student plan my wife (and therefore our son and myself) qualifies for due to her enrolling at Oakland University here in Michigan, where she's getting her counseling degree.

The plan being offered to all students (including graduate students and their families) was a Gold PPO through Blue Cross Blue Shield of Michigan. Here's how it compared against the closest equivalent policies available on the ACA exchange at the time, assuming we didn't qualify for any ACA subsidies (remember, this was before the American Rescue Plan beefed up & enhanced the subsidies to those earning more than 400% of the Federal Poverty Level): 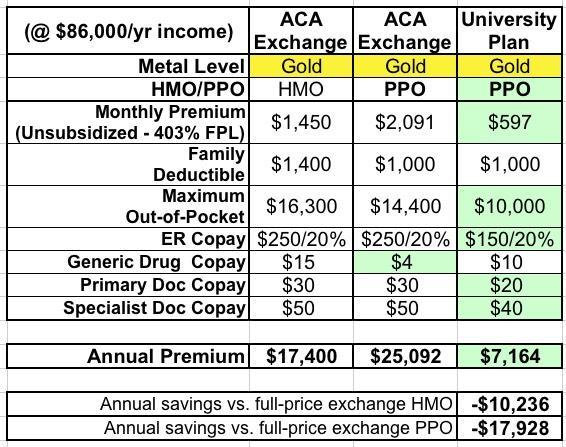 As you can see, at full price, the BCBSM Gold PPO student plan through Oakland University ran around $600/month for all three of us...a whopping 71% less than the equivalent plan via the ACA exchange. Even if we downgraded to BCBSM's Gold HMO instead, the student plan was still 59% less (I believe the provider network was identical and the deductible/copays were close enough to be mostly dismissed).

The main point of my post at the time was that university student plans tend to have a much healthier risk pool since the enrollees tend to be pretty young for obvious reasons. Oakland University has a higher percentage of older graduate students than average, but the average age of those enrolled is still likely in the mid-20's at most. This has a huge impact on premiums, especially when you consider some additional factors:

That's roughly a 14% premium hike in 2021 and another 15% hike in 2022. Now, don't get me wrong; those are both pretty steep rate hikes...but even at $782/month, it's still a lot less expensive than what we'd be paying for the ACA exchange equivalent (assuming you're talking about full price, that is). Here's what it looks like for 2022: 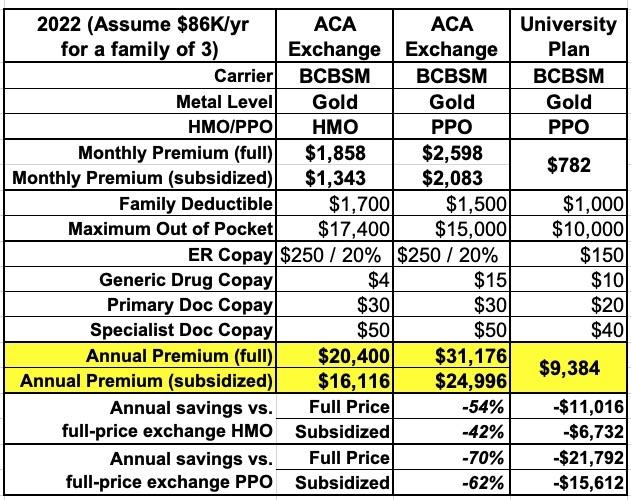 As you can see, we're paying between 62-70% less than we would for the same BCBSM Gold PPO on the exchange, and 42-54% less than the Gold HMO would be via the exchange. All things being equal, we can't really complain so far.

This brings me to 2023...or, more specifically, the 2022 - 2023 school year. The student plans at Oakland University run from September 1st - August 31st, and Open Enrollment only runs from August 15th - August 31st, so my wife went to the OU website to renew our coverage last week...and was greeted with the following:

Right off the bat, there's a problem. While it would be nice if our premiums stayed the same, that's not the situation: It still lists 2021-2022. It hasn't been updated to the 2022-2023 school year yet. This isn't filling me with confidence.

Still, she decided to go ahead and begin the enrollment process, assuming that the updated info & pricing would be available at Relation Education Solutions, which handles Oakland University student insurance enrollment and administers the program for them.

Here's where we hit the second red flag: If you try clicking ont he "Benefits at a Glance" or the "Plan Materials" (summary of benefits & coverage, plan overview & member guide), it says PENDING and the PDF links go nowhere...the current page just reloads.

In other words, we have no way of knowing whether the deductible, copays, coinsurance or other details have changed for 2022-2023 or not. Technically, we don't even know for certain that they're even still using Blue Cross Blue Shield of Michigan! (I'm pretty sure they are, as there's several references to BCBSM on the site, but those could be left over from last year...without seeing the actual, official summary of benefits we can't be sure).

That brings me to the actual enrollment process. When we clicked through to see what the actual cost is for the new year, we figured there might be perhaps another 10-20% hike, in line with the prior two years. Instead, we got this: 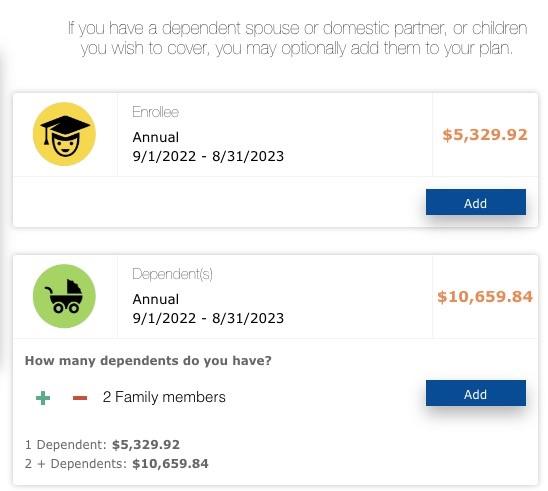 A broker friend of mine ran a check on a bunch of other universities in Texas, Ohio and, of course, Michigan, and says that none of them are showing rate hikes of more than 10 - 20% at most for student plans. This includes the University of Michigan and Michigan State University.

I don't know exactly how many students & their families are enrolled in Oakland University's plan, but total student enrollment in the university itself is under 20,000, and ~75% of those are under 25 years old, so I'm assuming the majority are enrolled in their parents plans. Even among those over 25, many who are married might be enrolled in their spouse's employer plan, and some are likely enrolled in heavily subsidized ACA exchange plans.

My point is that the total size of the OU student health plan risk pool may only be perhaps 5,000 or so people...and when the pool is that small, even one or two outliers can seriously skew the overall cost to the rest of the enrollees. The case study for this remains the infamous "$12 million Iowa teenager" incident back in 2016.

Here's a famous bar graph from the Kaiser Family Foundation which shows how healthcare spending typically breaks out across most populations: 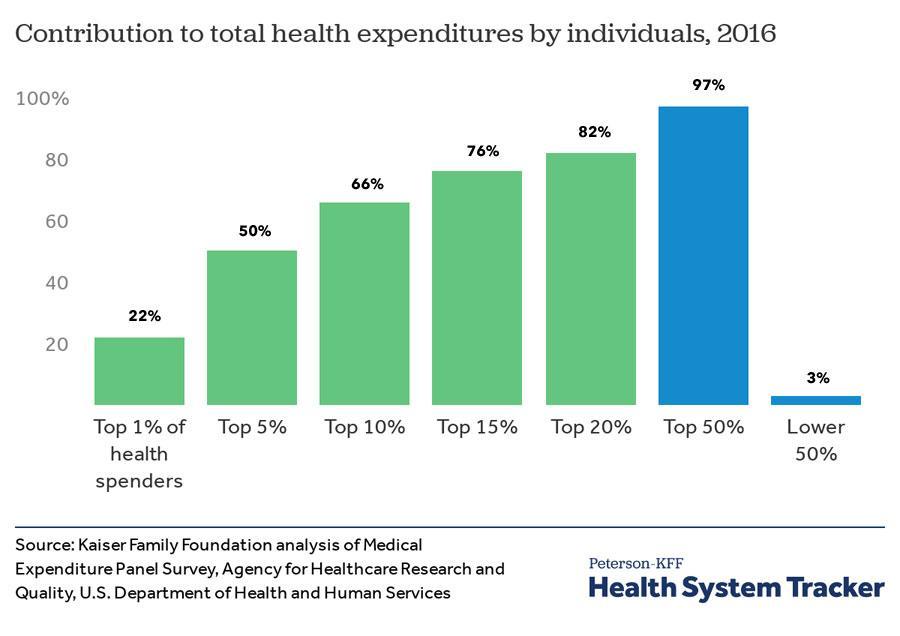 Total healthcare spending nationally averaged around $12,500/person in the U.S. in 2020. Let's assume that the pandemic, inflation etc. has caused that to jump to, say, $14,000 apiece on average. Of course, that also assumes an older average population, not college students. Then again, it also includes children under 17, not many of whom are likely to be part of the student plan pool. Let's call it an even $10K/person just for simplicity.

If so, and if total OU enrollment is exactly 5,000 people, the graph above should look something like this: 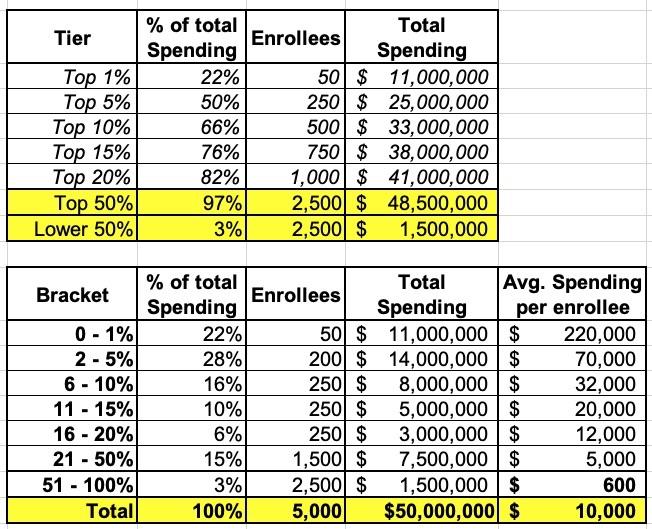 What does a 70% increase look like? Well, that would jack up the total cost from $50 million to $85 million. If just 35 enrollees (out of 5,000 total) were to rack up a million dollars more in medical claims in 2022 (Chemotherapy? Diabetes treatment? Hemophilia drugs? A premature infant being put in the NICU for a month?) than they did in 2021, that would tack on $35 million more in total risk pool expenses, causing a 70% hike, which is then spread across all 5,000 people.

This is all speculation, of course, but assuming something along these lines is what happened, well, that means that yeah, 2022 - 2023 costs could indeed be projected to run 70% higher than last year.

At the same time, ACA subsidies have been significantly improved and, just as importantly, the 400% FPL subsidy cliff is gone for the next few years. Is moving to an ACA exchange plan viable for my wife, son and I this year? Let's take a look.

Unfortunately, I don't know what the 2023 ACA pricing will look like yet, but I do know that Blue Cross Blue Shield of Michigan is requesting a 2.8% average premium reduction next year...and for their Premier Gold plan they're dropping premiums by 5.8%. For the table below I'm assuming perhaps a 3% unsubsidized premium drop for each exchange plan, and am also assuming that the benchmark Silver plan in our area will cost around the same (meaning similar subsidies to 2022): 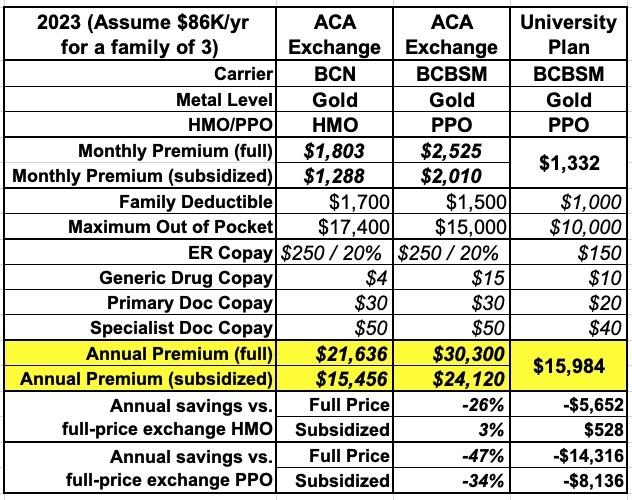 In this scenario, we're still better off sticking with the current plan unless we wanted to downgrade from the PPO to the HMO, in which case we'd save perhaps $50/month (possibly more...it really depends what our income is and what the benchmark Silver plan ends up being priced at, since that controls the subsidy formula).

Unfortunately we won't know that until mid-October, which will be too late for the fall semester, so assuming everything else checks out (the summary of benefits, etc.), it looks like we're gonna have to eat an extra $550/month, at least until the end of December. Ouch.

I'll update this if/when I get some more answers as to what the hell is going on with the documentation and so forth.

We've also confirmed directly with BCBSM that Oakland University is indeed still sticking with BCBSM (which is good); that yes, the 70% rate hike is accurate (which is not good); and that no, the OU BCBSM plan is not self-funded; it's effectively a standard, underwritten group plan (which is neither good nor bad, just noteworthy).

We also did hear back from Relation Insurance; here's where things get a bit more squirrelly. After explaining that they have nothing to do with the premium increase, they "assured" us that the benefits of the OU/BCBSM plan aren't changing...and sent us a PDF of the summary of benefits...

That's right: We still don't have a copy of the actual, official 2022-2023 plan explanation of benefits, and neither it nor the other 2022 - 2023 documentation is available on the website today. This is unacceptable given that we're 2/3 of the way through the Open Enrollment Period and still don't have official confirmation of what we're being expected to enroll in.

I've put in a follow-up call/email to Relation and will update as appropriate.

Update 8/25/22: Well, well, well...what do you know? By an amazing coincidence, Relation just happened to finally upload the official 2022 - 2023 documentation last night/this morning. It is the same plan and nothing has changed other than a slight increase in the pediatric dental out of pocket maximum.

Update 8/25/22: FarmbellPSU in the comments was able to help me finally track down the 2022 BCBSM Student Health Plan (SHP) rate filing forms, and holy cats: It looks like there's only 740 enrollees total (across 257 households, or around 2.88 enrollees per household...which suggests a lot of middle-aged graduate students & their families, like ours).

This could easily explain the dramatic spike, especially if they were expecting a high number of young undergrads this fall but ended up with a disproportionate number of older grad students instead. A handful of expensive enrollees, or a lot of enrollees ramping up utilization of services in the post-COVID world (yes, I know it's not over yet, but an awful lot of people seem to think it is) could easily skew the risk pool as demonstrated above.

As for the 70.4% rate hike, it looks iike they do have several other plans available (probably for faculty?); the overall average increase is "only" 56.7%.

Note: The 1,309 policyholder number appears to include standalone dental, vision and other oddball riders as well.