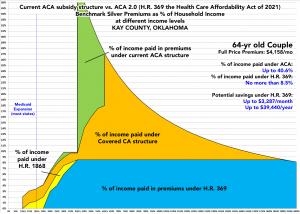 As I noted at the end of the post and a bunch of colorful Subsidy Cliff graphs, here's a summary of the maximum savings for each of these households: 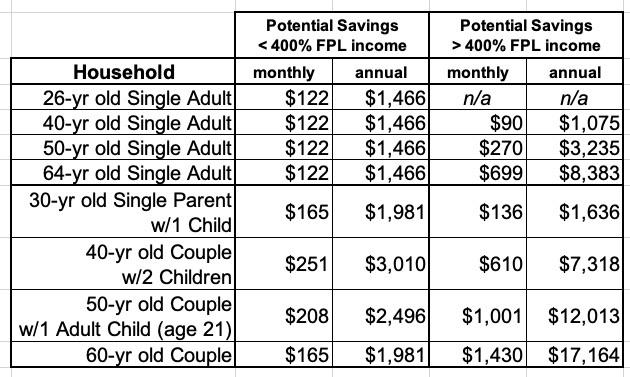 As you can see, the potential savings range from as little as nothing at all (in cases where the unsubsidized benchmark premium is already lower than the eligibility threshold) to as much as $1,430/month (over $17,000/year) for a 60-year old couple earning just over 400% of the Federal Poverty Level.

However, as noted above, this assumes the national average benchmark premium. Depending on where you live and what the benchmark premium costs in your area, the amount various households would save could be much less or considerably higher.

Today I decided to look at the maximum theoretical savings possible under H.R. 369.

In order to do this, the first thing I need to know is which county (out of over 3,100 nationally) has the highest benchmark plan premiums this year. Thankfully, Davide Anderson was able to dig that up for me: It turns out that while Wyoming has the highest average benchmark prices statewide, at the county level, that honor (?) belongs to Kay County, Oklahoma (population 44,000). (hat tip to David Anderson for digging this up for me).

Next, I need to figure out the benchmark Silver plan price for the various households. To save time, I'm only going to look at the lowest- and highest-price examples: A single 26-year old and a 60-year old couple.

Let's plug those in and see what they look like: 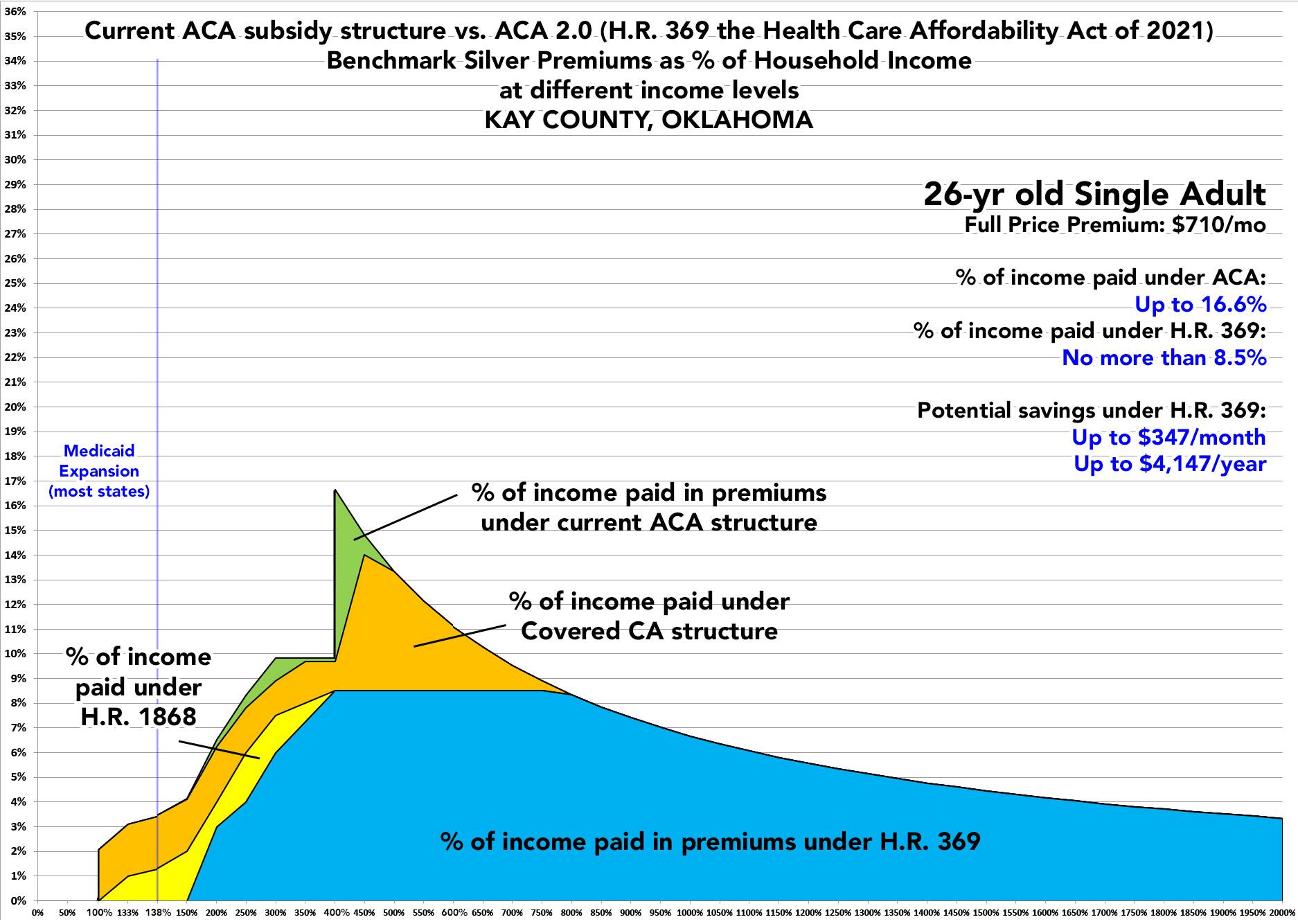 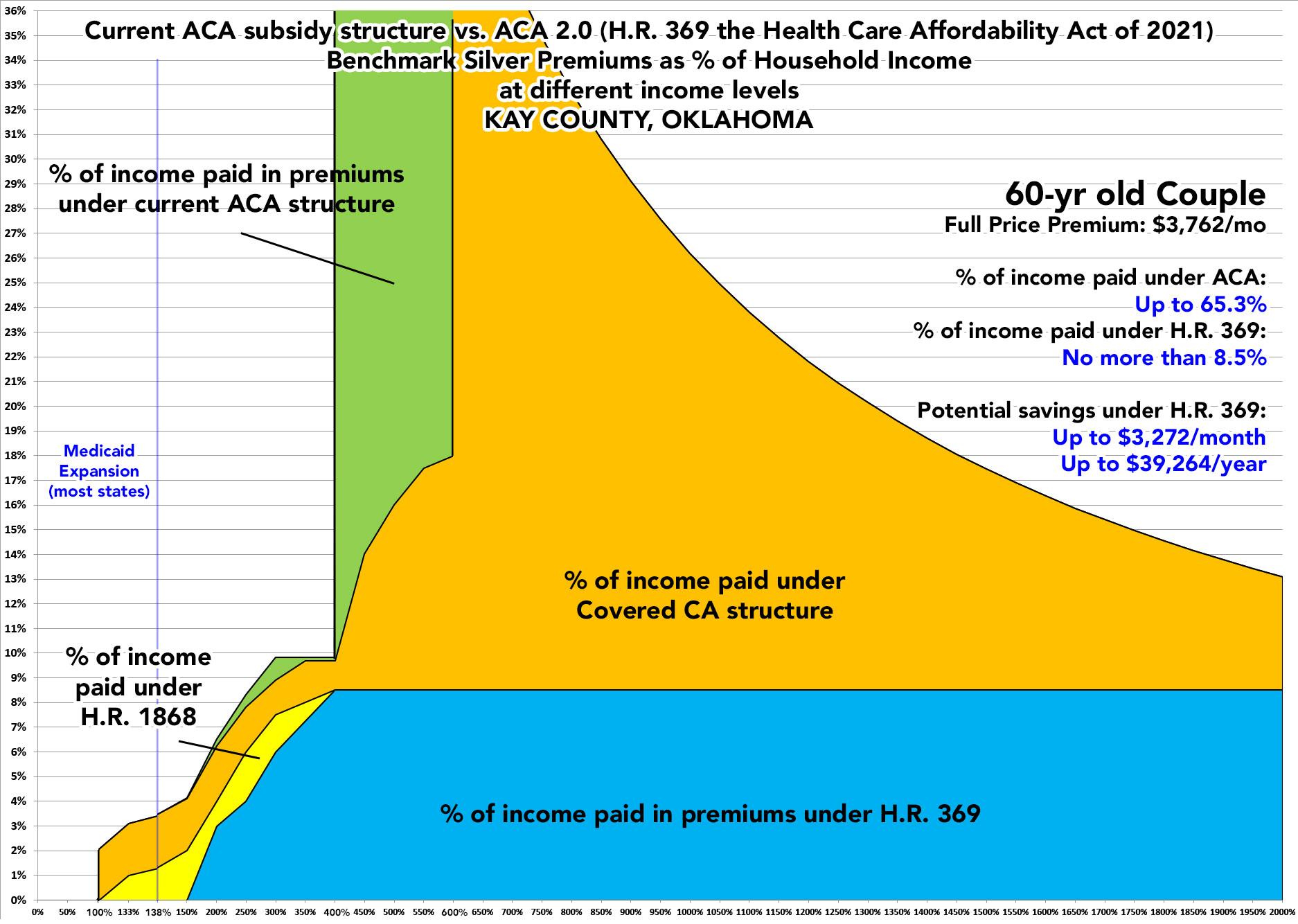 At full price, under the current ACA subsidy table, once they rise above the 400% FPL cut-off point, this couple would have to pay as much as a whopping $3,762/month in premiums, or an insane 65.3% of their annual income, which obviously isn't remotely feasible.

Taking this further yet: If this same couple were 64 years old...the highest age included in the 3:1 age band calculations, since they'd move to Medicare when they turn 65...their unsubsidized benchmark premium just over the current Subsidy Cliff cut-off in Kay County, OK would be $4,158/month, or a jaw-dropping 72.2% of their annual income. Under H.R. 369, this would plummet to just 8.5%, saving them as much as $44,000/year.

As an aside, this hypothetical couple could theoretically still qualify for subsidies if they earned up to $531,000/year, although they'd only receive $0.46 per month. I agree that they probably don't need $5.52 in assistance each year.

In fact, if you want to get really out there, a 64-year old couple in Kay County, OK who also happened to have three 25-year old children (triplets!) still living at home and on their policy would, theoretically, be looking at full-price premiums of $6,245/month, or just under $75,000/year.

(In this hypothetical example, the family would receive $0.79 per month if they earned $881,000/year. Needless to say, this is a pretty unlikely scenario).

Obviously this last scenario is pretty outlandish...but the one above it (a self-employed couple in their early 60's holding out for Medicare) is all too common, and H.R. 369 would be a godsend for them.