Oregon & Kentucky: You down with BHP? Yeah, you know me! 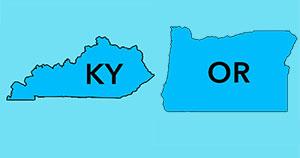 I haven't written much about the ACA's Basic Health Plan (BHP) program for awhile, aside from noting that it's well past time for the Centers for Medicare & Medicaid Services (CMS) to start including BHP enrollment in their official Open Enrollment Period reports, seeing how over a million people in Minnesota & New York now have healthcare coverage via BHP policies.

The out-of-pocket differences between Medicaid and QHPs are significant, even for people with incomes just above the Medicaid eligibility threshold who qualify for cost-sharing subsidies.

The Basic Health Program (BHP) – section 1331 of the ACA — was envisioned as a solution, although most states did not establish a BHP. Under the ACA (aka Obamacare), states have the option to create a Basic Health Program for people with incomes a little above the upper limit for Medicaid eligibility, and for legal immigrants who aren’t eligible for Medicaid because of the five-year waiting period.

The way BHPs work, once established, is like so:

Federal funding for BHP programs is supposed to be equal to 95% of the total amount of advance premium tax credits (APTC) and cost sharing reduction (CSR) assistance that the enrollees would otherwise have been eligible for had they otherwsie enrolled in a QHP using the ACA exchange. Of course, the state itself can also throw in additional funding to make the BHP plans more generous if they wish.

UPDATE: Thanks to David Anderson for providing another important detail about BHP plans:

The coverage has to be at least as affordable and at least as good as a benchmark silver plan with Cost-sharing reduction benefits applied.

This is important because a good chunk of ACA enrollees who are eligible for CSR-94 or CSR-87 Silver plans (those earning 100 - 150% FPL & 150 - 200% FPL) don't select them, losing out on a significantly better value in nearly all cases. BHP programs effectively push enrollees into the best plan available for them.

Minnesota was the only state to institute a BHP program (called MinnesotaCare) out of the gate, in 2014. This was mainly because they essentially just retooled an existing state-based low-income healthcare program of the same name into the new ACA-structured version. New York launched their BHP program, called the Essential Plan, two years later (in 2016).

Until now, Minnesota & New York have been the only two states to operate BHP programs. However, it looks like that's about to change. via Megan Messerly of Politico:

Two states are dusting off a little-used provision of the Affordable Care Act hoping to make health care more affordable for tens of thousands of low-income residents.

Oregon and Kentucky, despite their wildly different politics, are pursuing an Obama-era policy that uses federal dollars to establish a health insurance plan for people who make too much money to qualify for their state’s Medicaid programs. The goal is to provide residents who find Obamacare plans too expensive a less costly option, while smoothing insurance gaps for people teetering on the edge of Medicaid eligibility.

...The moves demonstrate a wide understanding that the Biden administration likely won’t be able to deliver on its promise to expand health care. And they come amid growing concern that the looming end of the Covid-19 public health emergency could result in millions of people being kicked off Medicaid and fear that Obamacare subsidies that helped millions of people buy coverage will expire at the end of 2022.

Oregon & Kentucky may have been spurred into action by current circumstances, but it would be a good idea for more states to do so regardless. In fact, "encourage more states to launch BHPs was #6 on my old "If I Ran the Zoo" ACA wish list.

In Oregon, Democrats passed a bill in March to establish a basic health program, the details of which are being ironed out by a task force that began meeting this week. In Kentucky, Republicans approved $4.5 million in state funds this spring to set up a basic health program, which was signed into law by the state’s Democratic governor. An estimated 85,000 Oregonians and at least 37,000 Kentuckians will be eligible to enroll in the plans as soon as next year.

It's important to note that assuming both states hit those numbers, their "official" QHP enrollment numbers will obviously drop accordingly...which is exactly why BHP data should be included in any ACA enrollment reports. As of this writing, Minnesota has around 108,000 BHP enrollees and New York has around 1.03 million; adding OR & KY could bump the total up to over 1.25 million Americans.

...New York and Minnesota offer plans with little or no premiums, co-pays or deductibles, a key selling point for proponents.

This is really the key point: BHPs are far simpler & easier to understand than QHPs. They sort of split the difference between Medicaid and QHP plans, appropriately enough.

...Unlike other provisions of the Affordable Care Act, which have been the subject of intense partisan clashes, the basic health program is finding champions even among some Republicans, who see it as a way for low-wage workers to earn more money or work extra hours without fear of losing their insurance because they no longer qualify for Medicaid.

...which is perfectly fine. That's actually the entire point of this provision of the ACA in the first place, after all.

...A handful of states, including Oregon, were interested in the program but didn’t move forward because health officials assumed people would sign up for subsidized marketplace plans when they made too much to qualify for Medicaid. They didn’t expect so many to find that coverage unaffordable.

...Earlier this year, Oregon health officials found that more than a third of Oregonians who were uninsured pre-pandemic said losing their Medicaid coverage was a main reason they didn’t have health coverage, even though they should have been eligible for subsidies on the exchange.

Again, just because they're eligible for financial help doesn't mean they know that or understand how to get it. BHPs streamline a lot of things which should make it easier for eligible folks to get covered using the program.

In Kentucky...A feasibility study conducted for the state by the health consulting firm Milliman determined that 40 percent of people in the basic health program’s membership, which it estimated at about 37,000, would have previously been uninsured.

I noted above that full BHP enrollment would mean a drop in QHP enrollment...but not by the full amount. In Kentucky's case it sounds like they think roughly 22,000 Kentuckians would shift from QHPs to BHPs, while another ~15,000 currently uninsured residents would newly gain coverage, which is of course a good thing.

Critics, however, believe states could instead be focusing on making exchange coverage more affordable instead of creating a new basic health program. Connecticut, for instance, plans to join a handful of states that use state dollars to subsidize marketplace plans for low-income residents.

I strongly support Connecticut doing this, but I fail to see it as an either-or situation. Both provisions help reduce enrollee costs and lower the uninsured rate. It'd be great if Oregon and Kentucky did both, frankly!

And West Virginia could be next.

A Republican House delegate, who is a former Medicaid recipient, is working with health care advocates to build support around his bill to create a basic health program during interim legislative meetings this summer, and West Virginia’s Senate majority leader has sponsored the companion bill in the Senate.

“It just seems so simple to me,” Delegate Evan Worrell said. “It’s about taking care of people. I don’t think it’s about politics.”