In which 2 NPR reporters pick my brain for over 2 hours... (updated x3)

Since May 2021, people living in counties that voted heavily for Donald Trump during the last presidential election have been nearly three times as likely to die from COVID-19 as those who live in areas that went for now-President Biden. That's according to a new analysis by NPR that examines how political polarization and misinformation are driving a significant share of the deaths in the pandemic.

NPR looked at deaths per 100,000 people in roughly 3,000 counties across the U.S. from May 2021, the point at which vaccinations widely became available. People living in counties that went 60% or higher for Trump in November 2020 had 2.7 times the death rates of those that went for Biden. Counties with an even higher share of the vote for Trump saw higher COVID-19 mortality rates.

Throughout the piece, I see quotes from:

I see citations made to the Centers for Disease Control, the U.S. Census Bureau, the Center for Systems Science & Engineering at Johns Hopkins University, the MIT Election Data & Science Lab.

I see links to the Kaiser Family Foundation, the CDC and NPR itself. I even see a note at the bottom that another NPR employee, Huo Jingnan, "contributed" to the story.

Hey Dan & Geoff, you know what I don't see mentioned even once?

ANY MENTION OF MYSELF, MY WORK OR MY WEBSITE, ACASIGNUPS.NET.

Now, it's true that all of the data itself is publicly available; I use many of the same sources myself. It's also true that different data analysts often work on similar projects at the same time; there's nothing nefarious about that. I presume they've been working on this story for some time...perhaps not as long as I have (since early this summer), but for awhile, anyway.

HOWEVER, when you contact a fellow data analyst specifically because they're working on the same data, then request a lengthy meeting with them in order to speak with them about their work and their methodology, and then follow up with them in order to schedule a second lengthy meeting to discuss the same work again, and then follow up with them a third time to clarify other details, it's generally considered professional to mention them at least once in the final piece you publish on your far higher-profile platform. 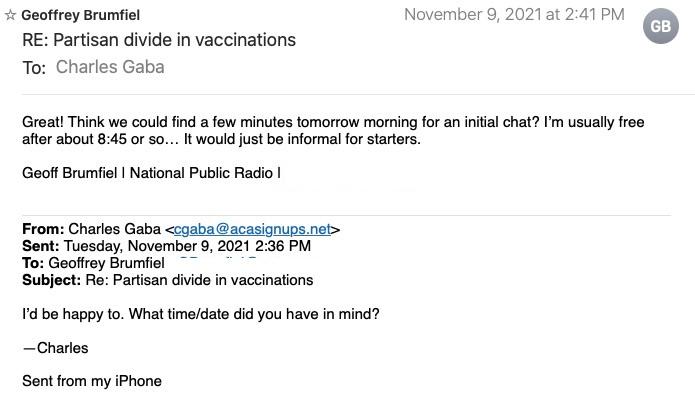 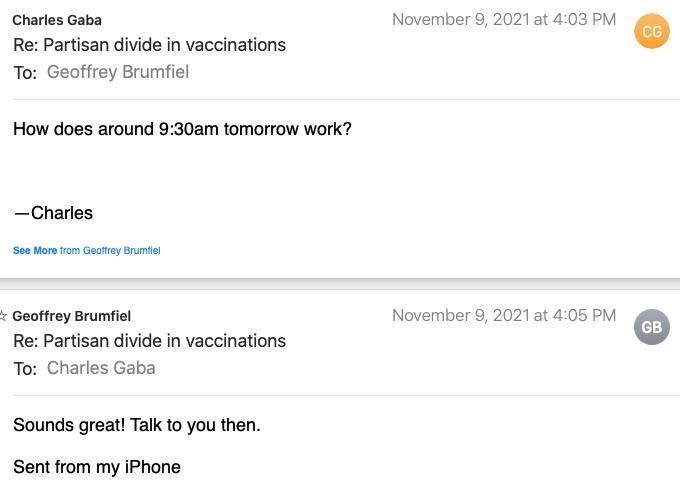 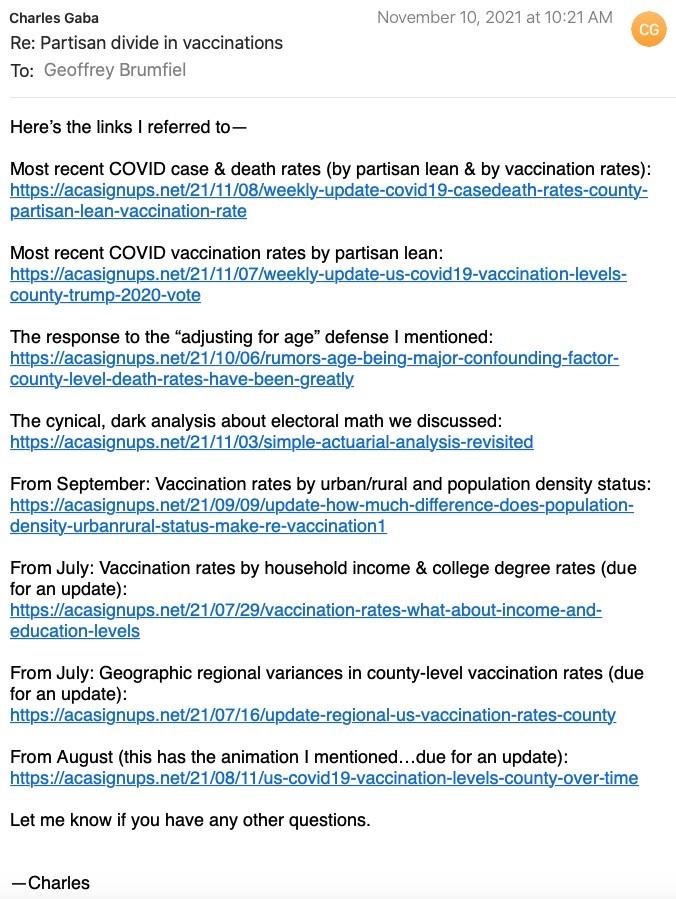 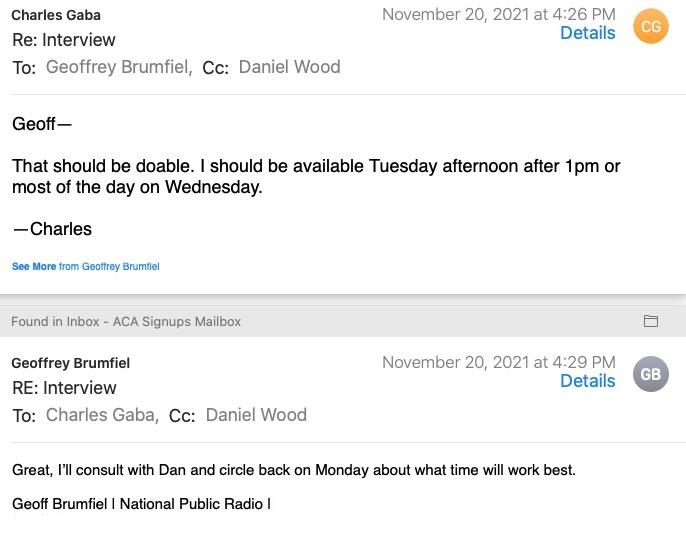 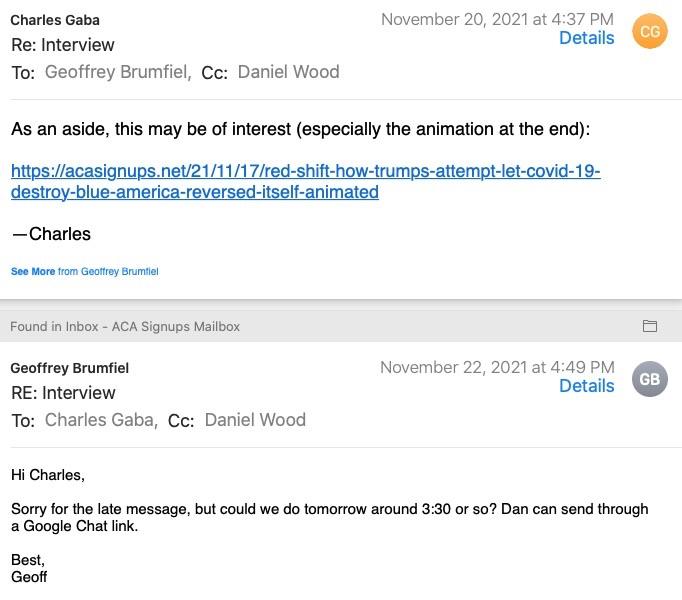 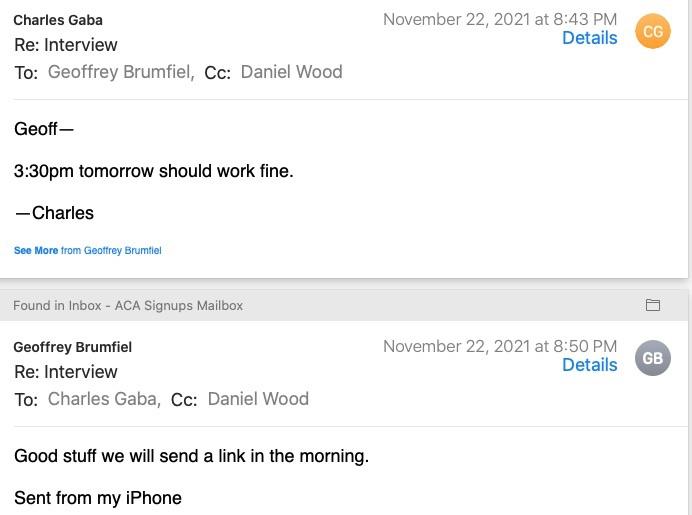 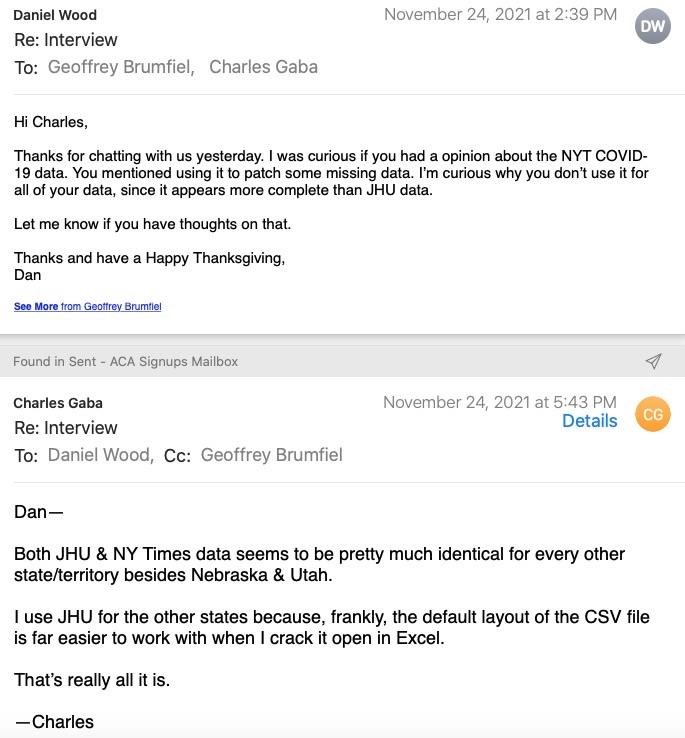 UPDATE: Mr. Brumfiel called me shorly after I posted this to apologize and to say he plans on rectifying the situation. To his credit, he at least took full personal responsibility for the oversight. That is, he didn't try to pin the blame on an editor, intern or his colleague Mr. Wood, who he said did the data analysis itself but had nothing to do with the wording of the actual NPR story.

UPDATE x2: Sure enough, the NPR story has been updated with the following:

"In October, the reddest tenth of the country saw death rates that were six times higher than the bluest tenth, according to Charles Gaba, an independent health care analyst who's been tracking partisanship trends during the pandemic and helped to review NPR's methodology. Those numbers have dropped slightly in recent weeks, Gaba says: "It's back down to around 5.5 times higher."

Thank you to Mr. Brumfiel for correcting the oversight so quickly.

UPDATE x3: I just noticed that the way the additional paragraph was worded makes it sound like the 6:1 death rate ratio was for October only. It's actually the ratio for all of July, August, September and October 2021. If you only include October by itself, it was around 6.2x higher. Just mentioning that in the interest of total accuracy.

UPDATE x4: See part two of the my NPR mini-saga...