(sigh) NPR didn't listen to my recommendation re. Utah either. (Updated)

On Monday, I noted that after NPR reporters NPR reporters Geoff Brumfiel and Daniel Wood updated their report on the partisan divide regarding COVID-19 vaccination and death rates to include my consultation regarding their analysis and methodology, I learned that they had disregarded my warning about using Johns Hopkins University data for Florida because JHU's data for Florida specifically was still reflecting data as of June 3rd:

As I had noted back in September:

...presumably inspired by a lawsuit versus Ron DeSantis' Florida Health Dept. which stopped reporting county-level COVID deaths as of June 3rd, 2021, the White House COVID-19 Team has gone ahead and started posting Florida's county death numbers anyway (as of Sept. 13th) as part of their COVID-19 Community Profile report.

This is particularly problematic because I'm sure that I specifically warned Brumfiel and Wood about the Florida data issue and recommended that they use the Community Profile Report instead during one of our two hour-long interviews.

I went on to note that the actual number of COVID deaths across Florida's 67 counties from May 1st - November 30th (not including those from out of state or whose county of residence was unknown) was nearly 15 times higher than what the JHU database had it at (25,842 vs. just 1,734).

The good news is that a few hours later, the NPR county lookup tool had been updated to remove Florida entirely:

This story has been updated to clarify the relationship of political partisanship to vaccination status.

Additionally, Florida's counties were removed from the analysis after publication because we learned that Florida has not updated county-level death numbers since June 3, 2021. With the removal of these 67 counties, heavily Trump counties go from a 2.73 times higher death rate than heavily Biden counties to 2.78 times more.

Again, one option would be to use the alternate data source I recommended and cite that in the methodology/footnotes. The other would be to do what they ended up doing--removing Florida entirely, as they had previously done for Alaska, Hawaii and Nebraska for similar reasons.

As I told the NPR reporters during the 2 hours we spoke (along with a subsequent email exchange), I trust Johns Hopkins University's data on daily COVID deaths for 47 states...but there are three exceptions: Nebraska, Florida and Utah.

Well, they didn't include Nebraska from the start, which is fine; and they updated the story to remove Florida as well after I pointed out the error, so that's two. But what about Utah?

Well, on a hunch I decided to plug a couple of Utah counties in and sure enough, they both come back showing 0 deaths per 100K since May 1:

You see, for some inexplicable reason, Johns Hopkins University doesn't break out Utah's COVID data by county--they do it by region, at least partly. They group data from most of the states 29 counties together into 6 regions called "Bear River," "Central," "Southeast," "Southwest," "TriCounty" and "Weber-Morgan."

The problem is that this means that JHU shows 22 Utah counties as having no COVID deaths...even though those counties have over 1/3 of Utah's total COVID deaths. The 517 deaths from May - November are instead listed as being in those 6 regions, none of which show up in the NPR graph: 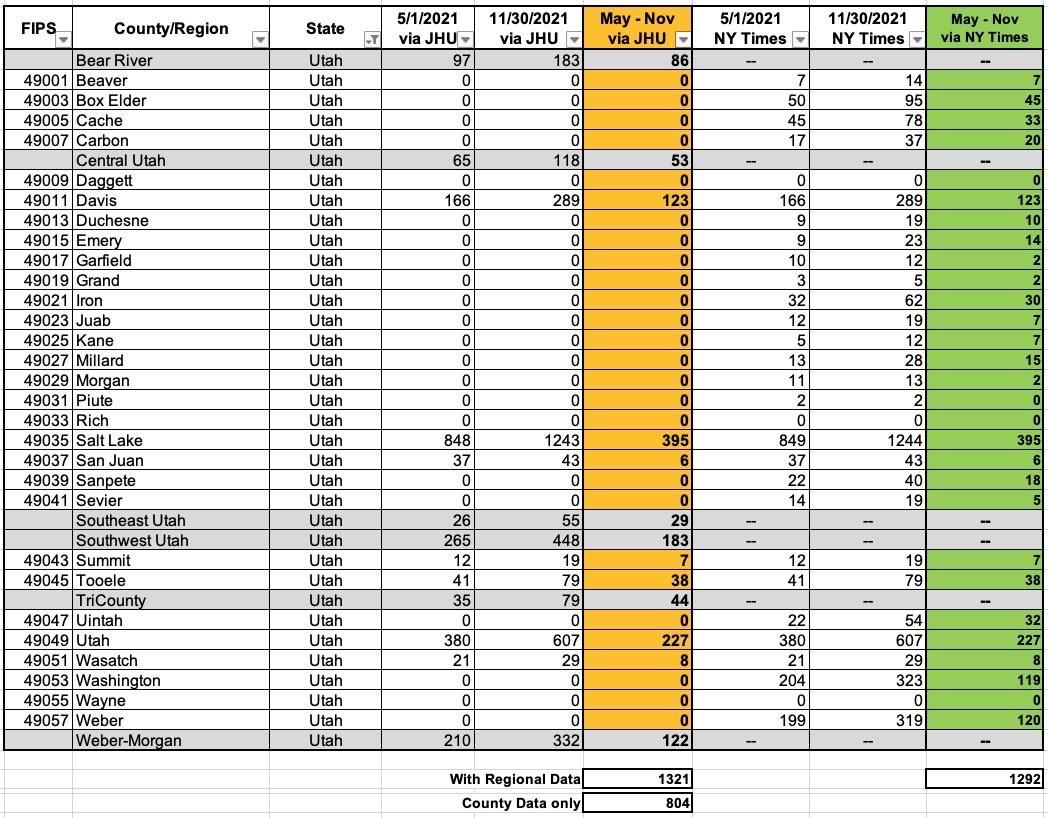 Now, on the whole, the Utah issue isn't nearly as big as the mistake they made with Florida; instead of being 15x higher than NPR's database had it at, Utah's actual county total is only around 60% higher. Utah is also a much smaller state population-wise, and it didn't experience the massive fall Delta variant surge that Florida did either, so it's a far less egregious error. Finally, the JHU and NY Times numbers do match for 10 of the 29 counties (in 3 cases it's because they apparently really haven't had a single reported COVID death to date!)

Having said that, I'm honestly beginning to wonder why they asked for my advice/recommendations in the first place, since it sounds like they didn't actually utilize two of the most important ones.

UPDATE 5:17pm: Well, there you have it: They've re-added Florida again using the WH Community Profile Report and are also now using the WH CPR for the "blank" counties in Utah as well, which is fine: 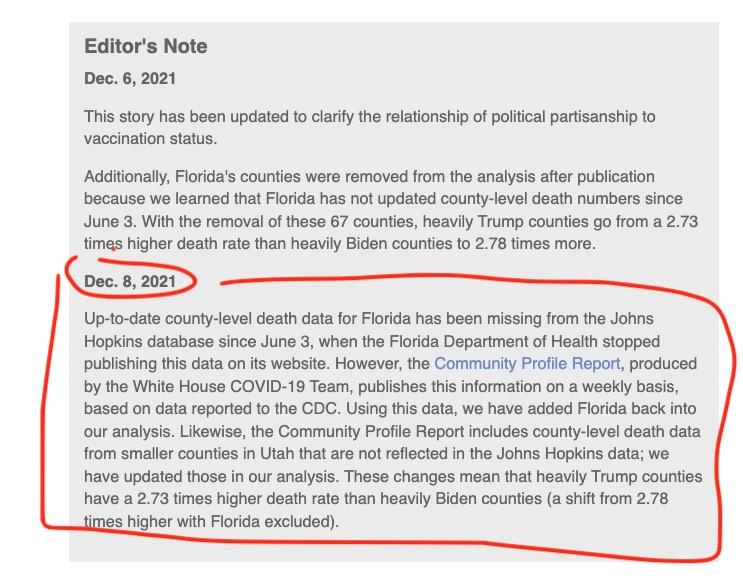