Wisconsin: Medicaid enrollment up 22% since COVID hit; 30K would gain coverage via #ACA expansion (& the state would save tons of money)

For the various enrollment data, I'm using data from Medicaid.gov's Medicaid Enrollment Data Collected Through MBES reports. Unfortunately, they've only published enrollment data through December 2020. In most states I've been able to get more recent enrollment data from state websites and other sources. I'm using estimates based on raw data from the Wisconsin Dept. of Health Services for January 2021 and beyond.

Wisconsin is one of 12 states which still hasn't expanded Medicaid eligibility under the ACA (13 if you include Missouri, whose voters expanded the program last year...but which the state legislature refuses to fund)...with a strange twist: While the state refused to fully expand Medicaid all the way to 138% of the Federal Poverty Line (FPL) via the Affordable Care Act, they did agree to partially expand coverage up to 100% FPL...using traditional Medicaid provisions.

This means that the state is basically spending hundreds of millions of dollars more on Medicaid services than they have to, since the federal government only pays 66% of the cost of traditional Medicaid coverage vs. 90% of ACA expansion. Why on earth they're still refusing to simply expand under the ACA I have no idea (OK, I do know the answer to that one; it's rhetorical).

This also means that around 30,000 Wisconsins who should be eligible for Medicaid aren't...but at least they still have the option of a heavily-subsidized private ACA plan instead, which is better than nothing.

Non-ACA Medicaid enrollment in Wisconsin has been extremely steady at around 1.2 million people since 2014...or at least it was until early 2020. Once COVID showed up, Mediciad enrollment started to take off and has since increased by 21.6%.

In addition, according to the Kaiser Family Foundation, besides the ~30,000 uninsured Wisconsin residents who earn more than 100% FPL who are eligible for subsidized exchange plans, there's another 57,000 who are also eligible for other reasons who haven't signed up yet for one reason or another. 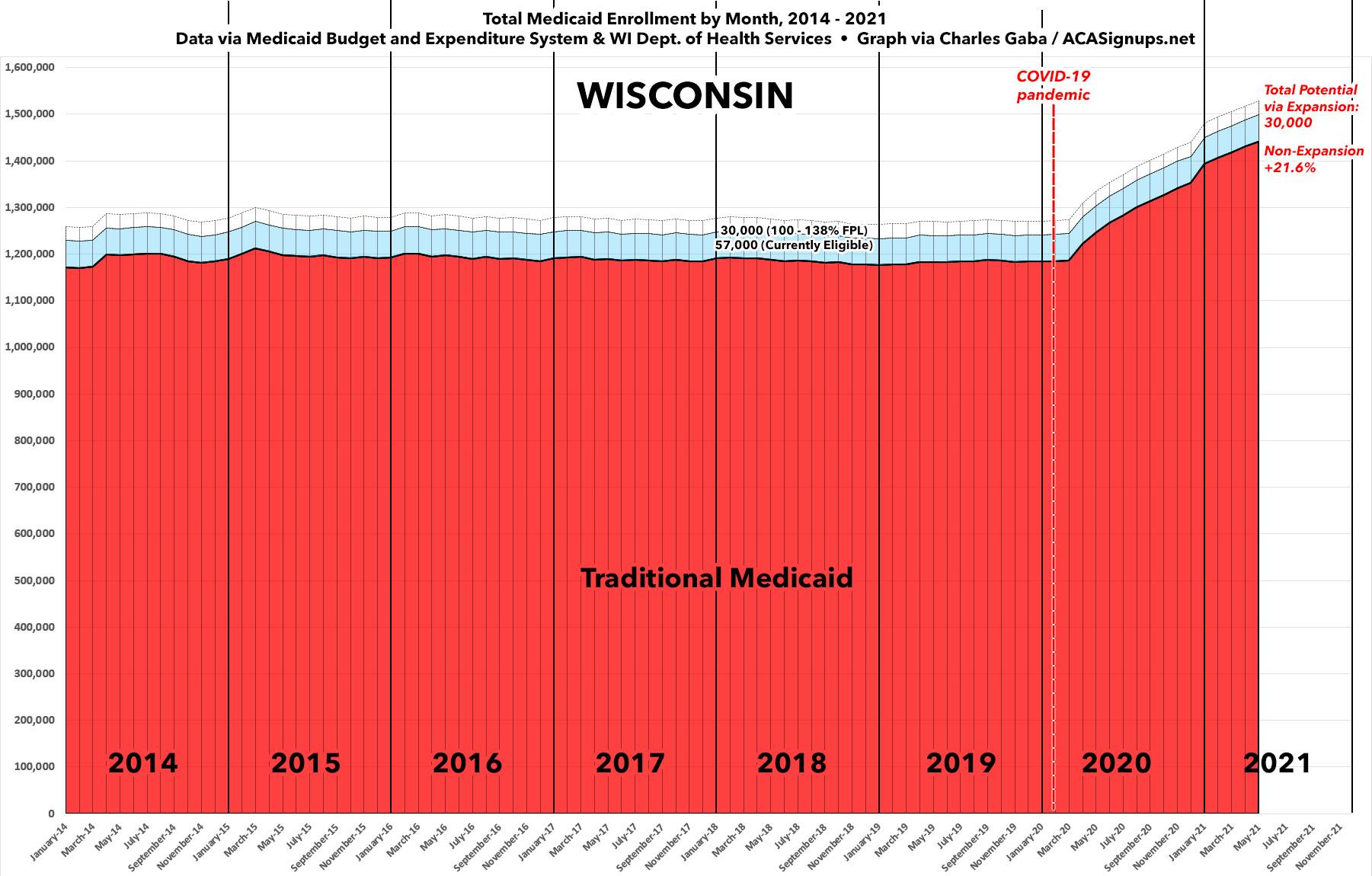