A week ago I noted that my year-long tracking of COVID-19 cases and deaths along partisan lines has proven to be very much justified, as recent headlines in major news outs have proven:

...The disparity in vaccination rates has so far mainly broken down along political lines. The New York Times examined survey and vaccine administration data for nearly every U.S. county and found that both willingness to receive a vaccine and actual vaccination rates to date were lower, on average, in counties where a majority of residents voted to re-elect former President Donald J. Trump in 2020. The phenomenon has left some places with a shortage of supply and others with a glut.

As I stated, I've decided to drill down more closely into my own home state of Michigan, noting that...

...On the vaccine front, meanwhile...yep, as of today, Michigan's handful of large Blue counties (the 12 counties which voted for Biden last fall have 55% of the population) have vaccinated 36.2% of their residents, while the other 71 Trump-voting counties have only vaccinated 32.9% of theirs.

Here's what the gap looked like as of May 3rd:

Well, it's a week later, and Michigan's COVID-19 vaccination tracker has just been updated with data as of today, so I've plugged in the latest numbers and here's what it looks like as of May 10th:

Yikes. The ratio of cases per capita have stayed almost identical, but the mortality rate in the red counties continues to inch closer towards the blue counties...and more significantly, the vaccination gap between the blue and red counties has grown larger: From 3.3 points to 3.9 points in just one week.

Here's the scatter plot graph (again, I don't have the ability to size the dots by population, but believe me, the blue counties collectively have more people than the red counties): 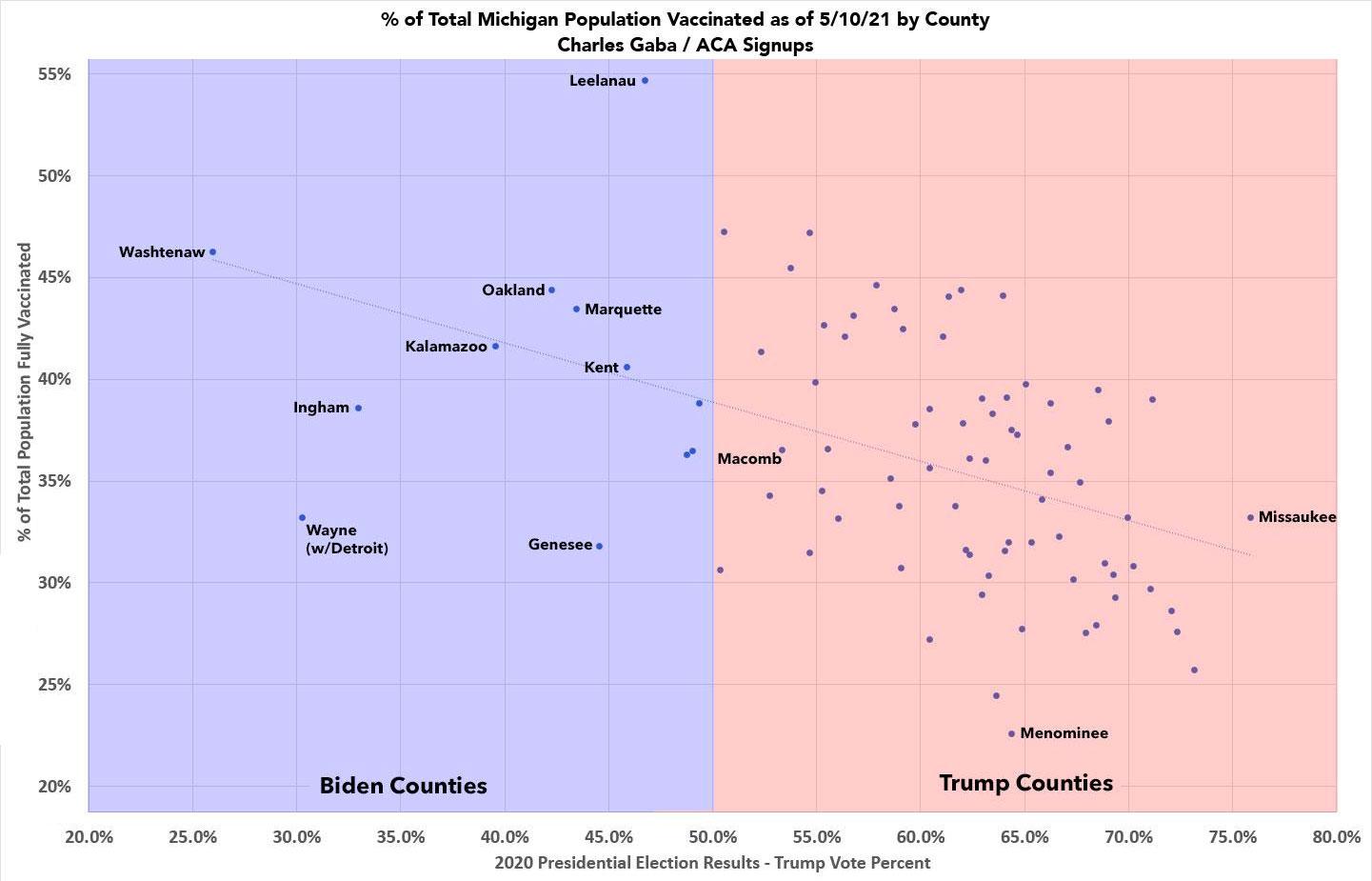 UPDATE: As Jennifer Taub and Thomas Richardson have suggested, I've also run scatter plots for Michigan counties by average per capita income and by eduation (percent of population with at least an associates degree). Both also show similar trend lines (I'm not showing Oakland County on the income graph as it's a huge outlier which skews the graph pretty badly).

This becomes a bit of a chicken & egg, correlation/causation situation. As Taub points out, other important factors impacting vaccination rates include the ability to take time off of work, access to transportation, access to childcare to watch your kids while you get vaccinated and so forth. In other words, it's a combination of factors.

Of course there's also some connections between all three: In recent years, those with college degrees increasingly tend to vote Democratic, and it's obviously easier to afford higher education if you're higher income to begin with. 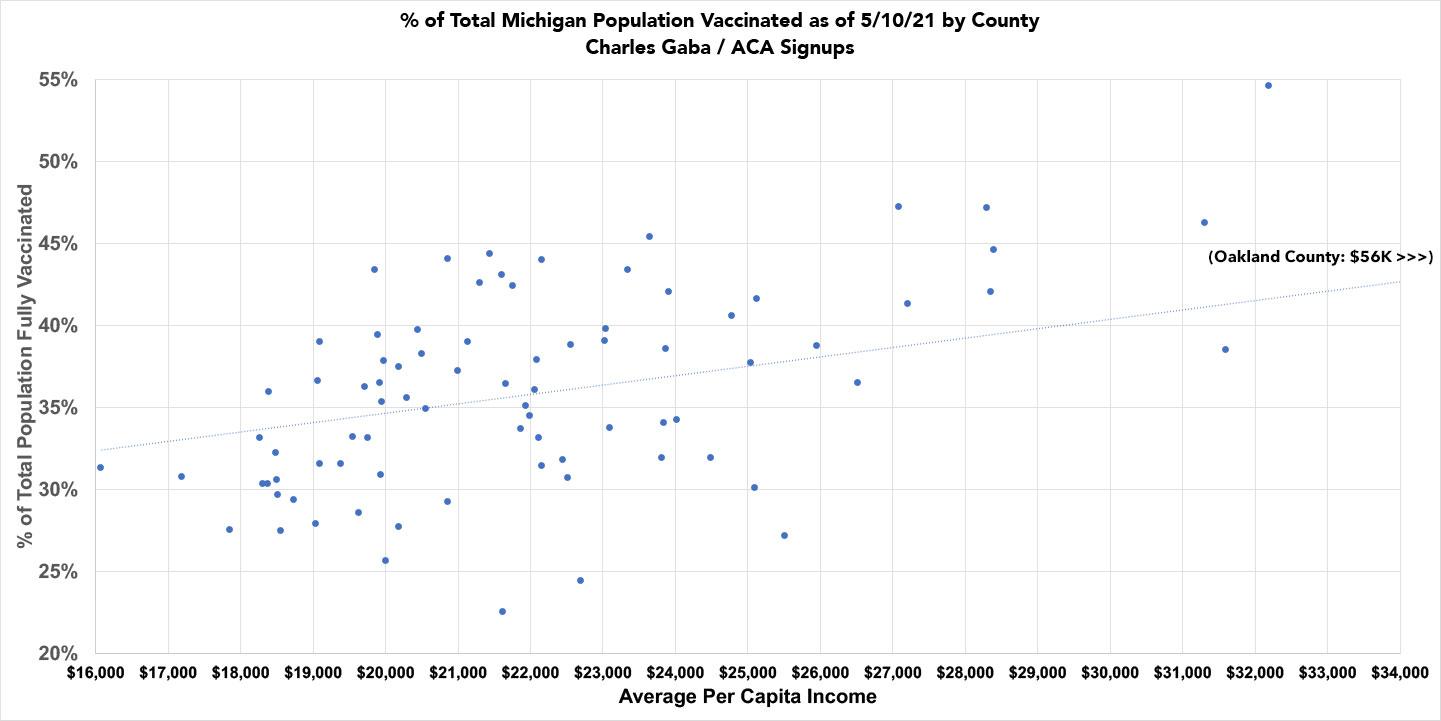 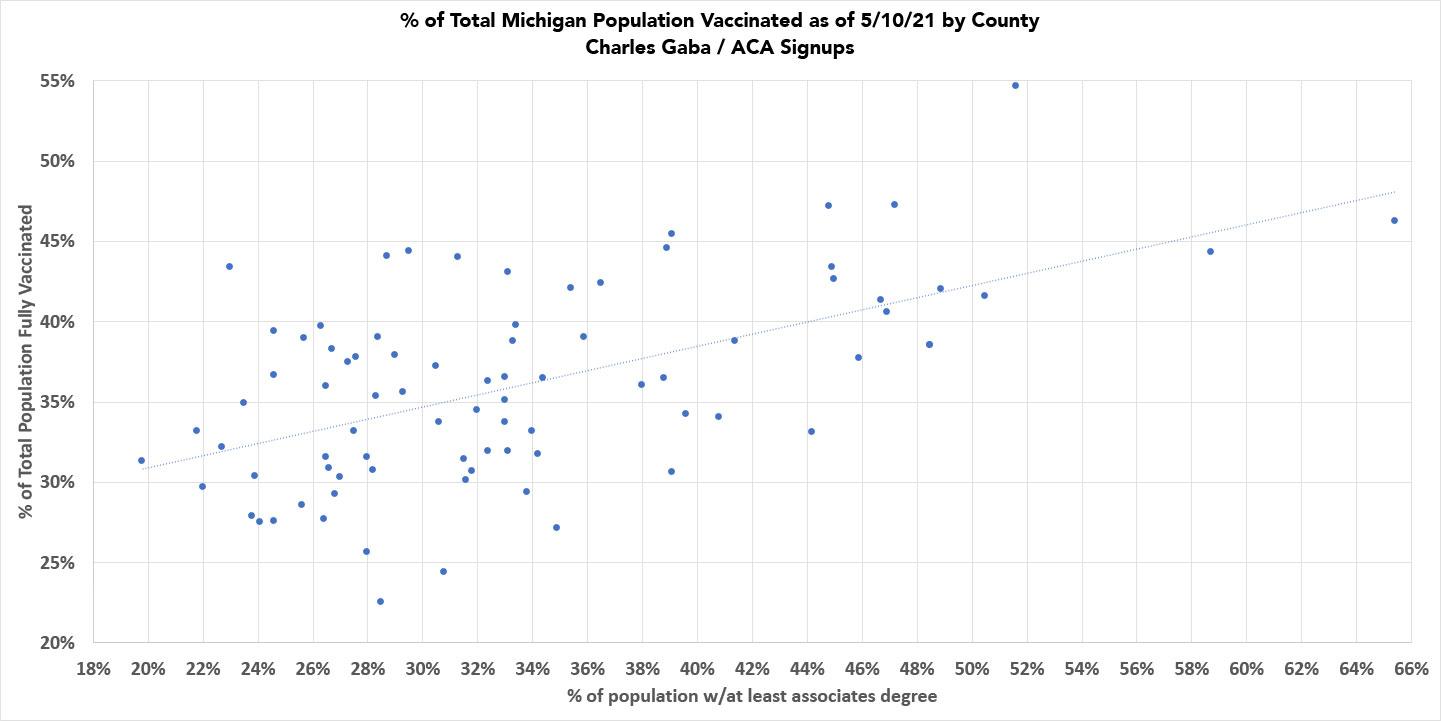