As regular readers know, for over a year now, I've been tracking the spread of COVID-19 per capita case and death rates a) at the county (not just state) level and b) along partisan lines.

The most obvious example of this has been my weekly updated breakout of the RATIO between the case & death rates over time in "Blue Counties" (those won in 2016 by Hillary Clinton, later replaced by those won in 2020 by Joe Biden, by at least 6 points or more) vs. the rates in "Red Counties" (those won by Donald Trump in 2016, late replaced with 2020 results, by 6 points or more).

As of last week, that graph looked like this: 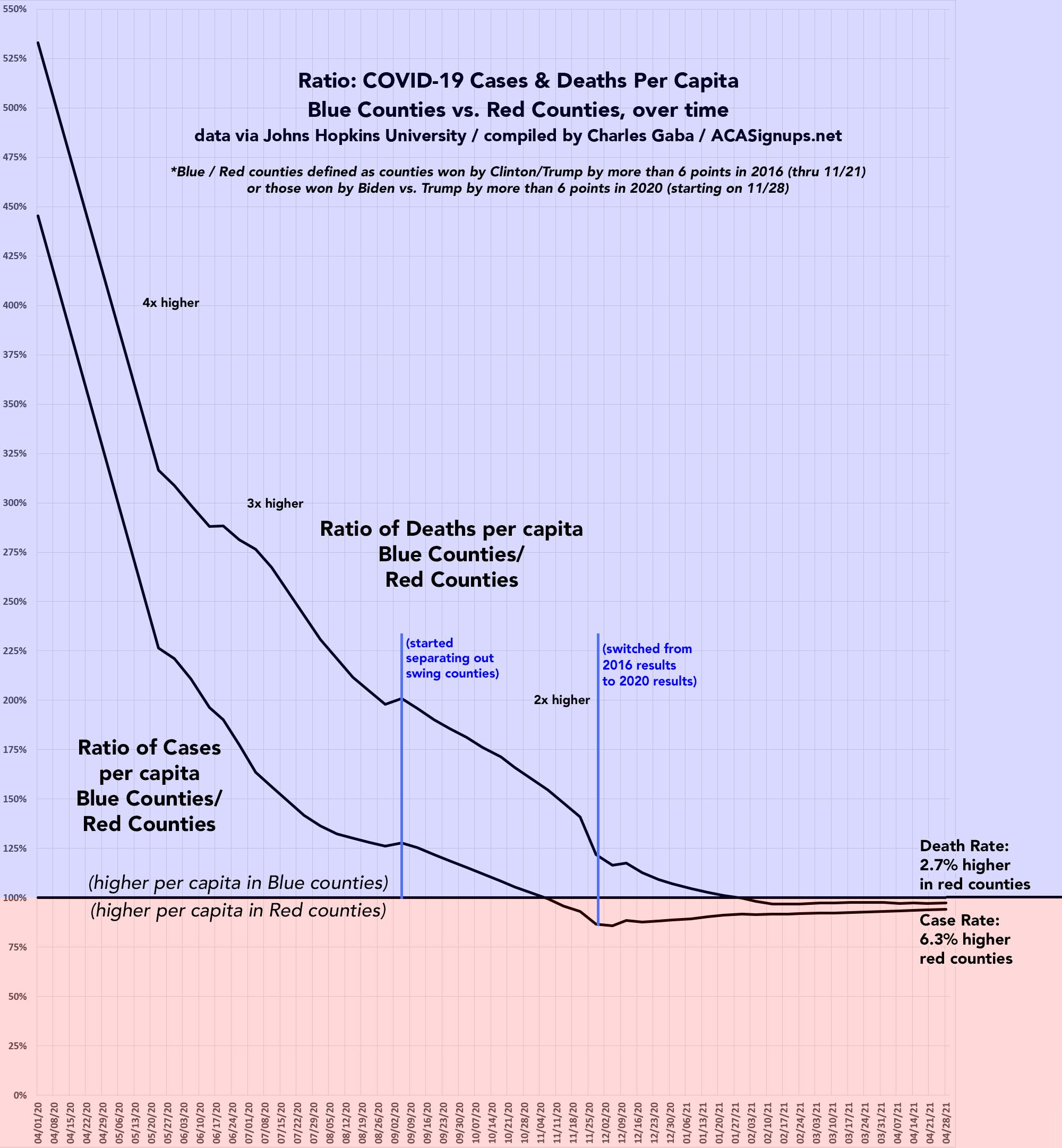 Democrats also tend to be far more racially diverse, and as it happens, Black and Hispanic Americans tend (surprise, surprise) to have less access to decent healthcare coverage and/or facilities than White Americans...who in turn are far more likely to be Republican and to live in more sparsely-populated, rural parts of the country.

This being the case, the Trump Administration decided to attempt to capitalize on the situation by massively understating the seriousness of the pandemic while simultaneously blowing off its devastating impact on Democratic-leaning parts of the country. Katherine Eban famously reported for Vanity Fair last summer:

Since then, of course, we know what happened: The COVID-19 case and death rates in the more sparsely-populated Red states started to catch up to, and eventually surpass, the rates in the Blue states. Since the beginning of 2021, the rates in each have pretty much stabilized, with both running slightly higher in the Red states.

I've caught a decent amount of flack from people (both well-meaning and not so well-meaning) for tracking COVID-19 in this way...but as I said last summer:

I hope the Vanity Fair article puts to rest any complaints that it's "inappropriate" for me to be viewing the data through a partisan lens...because when the President of the United States, the HHS Dept., the Centers for Disease Control and the rest of the executive branch of the federal government is doing so, it means policy is being determined based on it. Pretending it "doesn't matter" because it shouldn't matter doesn't magically make it so.

AGAIN: SHOULD a deadly pandemic be "politicized"? Of course not. But the moment the Trump Administration decided to do so (basically the moment they found out about it), the die was cast...and when nearly every GOP official decided to run with it, it was baked in. Once that happened, pretending that there was "no good reason to track it along partisan lines" became as delusional as saying that you shouldn't track it based on age, geography, population density, socioeconomic status, ethnicity and so forth.

Like it or not, Trump quite deliberately decided to make "partisan lean" one of the most important factors in how to proceed with COVID-19 policy across the board...and most of the GOP was all too willing to fall in line.

We have a new President, a new Administration, and all-new public health officials calling the shots (literally) now...but the damage had already long since been done.

Lo and behold, cut to 9 months later, and we have headlines like this:

And, of course, that inevitably has led to this:

About 31 percent of adults in the United States have now been fully vaccinated. Scientists have estimated that 70 to 90 percent of the total population must acquire resistance to the virus to reach herd immunity. But in hundreds of counties around the country, vaccination rates are low, with some even languishing in the teens.

The disparity in vaccination rates has so far mainly broken down along political lines. The New York Times examined survey and vaccine administration data for nearly every U.S. county and found that both willingness to receive a vaccine and actual vaccination rates to date were lower, on average, in counties where a majority of residents voted to re-elect former President Donald J. Trump in 2020. The phenomenon has left some places with a shortage of supply and others with a glut.

As a born & raised Michigander, I decided to drill down more closely into my own state. The pattern has been the same as the national picture. The ratio of cases per capita today is nearly identical (6.2% higher in the Red counties vs. 6.3% nationally), and while deaths per capita are still 2.7% higher in the Blue counties, Michigan has shown a steady shift to the Red here as well.

On the vaccine front, meanwhile...yep, as of today, Michigan's handful of large Blue counties (the 12 counties which voted for Biden last fall have 55% of the population) have vaccinated 36.2% of their residents, while the other 71 Trump-voting counties have only vaccinated 32.9% of theirs.

Here's a scatter plot graph showing where every county in Michigan stands on vaccination progress as of today, sorted by the 2020 Presidential election results. Unfortunately I don't have the ability to size the dots by county population, but you get the idea: 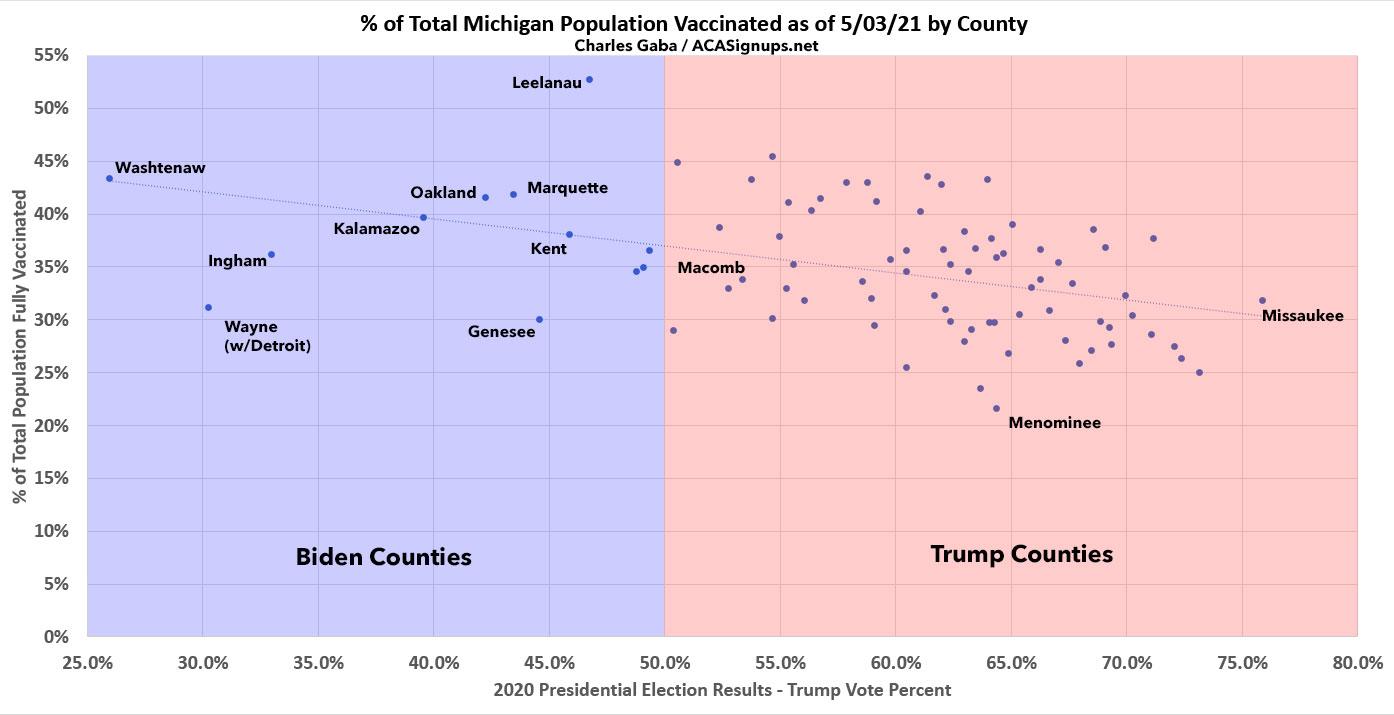 UPDATE: From a Bloomberg article this morning about the drop-off in vaccinations over the past week or two:

In Louisiana in mid-March, the state was starting vaccinations for almost 20,000 people a day. As of April 27, that number had fallen to 5,807 people a day, using a seven-day average. On a per-capita basis, it’s one of the lowest rates in the country, in a state that ranks only ahead of Mississippi in people who have started vaccinations.

“We were seeing the beginning signs of slowing before the J&J pause,” said Joseph Kanter, Louisiana’s state health officer. “The pause did not help that at all, but I would not blame it.”

Kanter, in a phone interview, said that it’s been a challenge to get people in more rural parts of the state to get vaccinated. He said he’s been surprised by some of the resistance to the shots. “The politicization of it caught me a little bit off guard,” he said.

No offense to Mr. Kanter, but perhaps if he'd been following my work over the past year he wouldn't have been caught off guard. Just saying.