Alabama: Medicaid enrollment up over 9.3% since COVID hit; could be up over 200K more if they expanded Medicaid

As I noted a couple of weeks ago, I've relaunched my project from last fall to track Medicaid enrollment (both standard and expansion alike) on a monthly basis for every state dating back to the ACA being signed into law.

Today I'm presenting Alabama, which is one of the 14 states which still haven't expanded Medicaid yet (technically there are 12 holdout states, but Missouri and Oklahoma haven't actually enacted their expansion programs yet).

As you can see, even without expanding Medicaid under the ACA, Alabama still saw Medicaid enrollment increase by roughly 9.5% within six months of ACA expansion going into effect back in 2014, due to the "Welcome Mat Effect"...that is, new Medicaid enrollees who were already eligible to be enrolled even without the expansion provisions of the ACA, but who only did so afterwards due to:

As far as I can tell, perhaps 70,000 Alabamans enrolled shortly after ACA expansion went into effect via the Welcome Mat Effect.

After mid-2014, Medicaid enrollment in Alabama held pretty steady at around 900,000 people all the way up until the COVID pandemic hit in February 2020...after which it has dramatically increased to over 1.01 million as of last November, a 9.3% increase in just 9 months. I'm assuming it's continued to climb since then, but don't have more recent numbers yet.

In addition, the Kaiser Family Foundation estimates that around 204,000 more uninsured Alabamans would become eligible for Medicaid if the state would finally expand it under the ACA. They also estimate around 17,000 uninsured residents who are already eligible but still haven't enrolled for one reason or another (the Welcome Matt effect isn't perfect, after all).

It's worth noting that even without expanding Medicaid, up to 170,000 Alabamans enrolled in ACA exchange plans stand to lose their healthcare coverage almost immediately if the law is struck down by the U.S. Supreme Court in the next few months in response to the GOP-brought "Texas Fold'em" lawsuit. 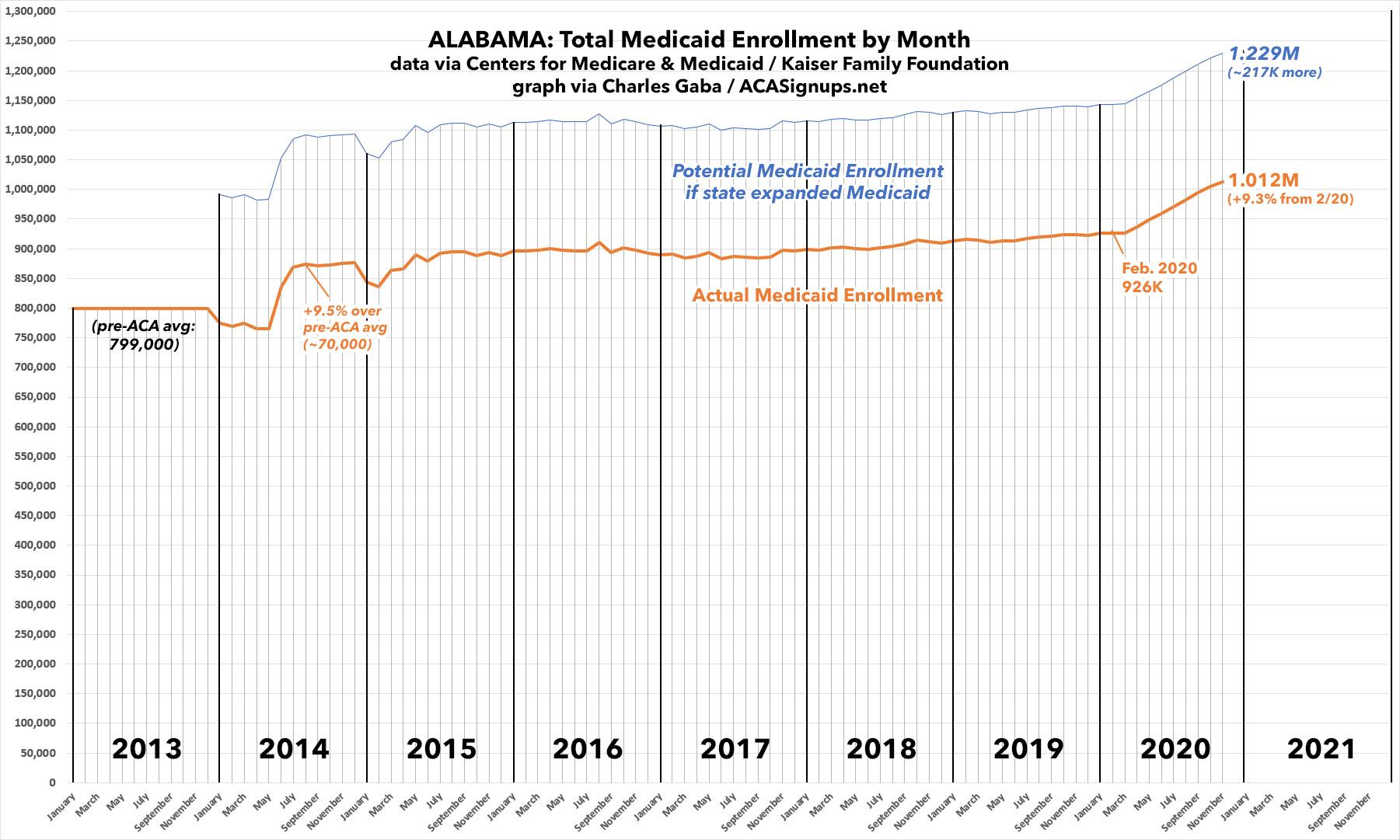