Rep. Golden's excuse for voting against the #ARP is tarnished brass. 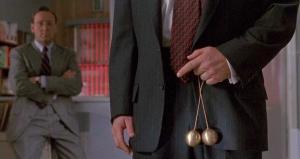 When the $1.9 trillion American Rescue Plan (ARP) achieved final passage on March 10th, it did so almost exclusively along party lines. I say "almost" because there was a single Democratic House member who voted against it: Representative Jared Golden (ME-02).

I fully understand the tightrope that some swing district Dems have to walk. To his credit, Rep. Golden voted to impeach Donald Trump not once, but twice (though he only voted in favor of one of the 2 articles of impeachment against him the first time around). I certainly don't expect every single Democrat to vote the party line on every single bill.

In the end, the bill passed anyway, if only by a handful of votes; my guess is that he even received Speaker Pelosi's unofficial blessing to vote against it, as long as she knew for sure it would pass regardless.

Still, his Op-Ed in the Portland Press Herald attempting to explain his "no" vote last Friday is either laughably naive or an insult to the intelligence of the people of Maine's 2nd district. He actually attempts to use the ARP's dramatic 2-year expansion of ACA subsidies (something most Democrats have been hoping to accomplish since the moment the ACA was signed into law 11 years ago) as a bad thing, because...

...these increases in Affordable Care Act subsidies are slated to expire in two years, shortly after the 2022 election. While these kinds of temporary expansions allow politicians to campaign on lower health care premiums, they aren’t a lasting solution, and their renewal is far from guaranteed.

For example, a recent report touting the ARP health care provisions cites the fact that a 60-year-old earning just over $51,000 will receive thousands of dollars in healthcare subsidies for the next two years. But after the subsidies expire, they will again face high premiums until they become eligible for Medicare.

Yes, that's true: IF the ARP's premium expansion isn't made permanent, enrollees earning just over the ACA's 400% FPL income threshold would indeed lose out on subsidies starting in 2023. Apprarently the solution to this is to...not provide those subsidies for 2021 & 2022 either??

A more lasting alternative for this 60-year-old would be to permanently lower the Medicare eligibility age to 60, as President Biden proposed during his campaign. Such a change would provide 23 million Americans with an immediate reduction in health care expenses without the financial cliff that follows the expiration of the COVID relief subsidies.

Perhaps so..but in what universe does Rep. Golden think that not expanding ACA subsidies in the ARP would somehow make Medicare 60+ more likely to happen later this year? Conversely, how does including the subsidy expansion make it any less likely for Medicare 60+ to become a thing?

Also, while I'd be happy to see Medicare 60+ pass into law as well (although there's actually some debate about whether it would actually worsen the risk pool under that age, believe it or not), Golden presents this as an either/or scenario. Guess what happens to someone earning just over $51,000/year who's under 60 years old if the ARP subsidies aren't expanded past 2022?

The choice to focus on short-term changes like these rather than long-term reforms that would expand access and reduce costs in a durable way is a reflection of the limitations of the budget reconciliation process. Democrats may think it good politics to set up a fight over expiring health care subsidies in 2023, but it will be a proxy fight that brings us no closer to the kinds of meaningful reforms – like lowering the Medicare eligibility age or expanding health care access through Medicaid – that we have been promising our constituents we would deliver on for years.

First of all, the reason for the 2-year limit on subsidy expansion under the ARP was because it's primarily supposed to be a COVID pandemic relief bill. Making health insurance more affordable is directly related to both the public health crisis and people's financial insecurity...but it's a pretty big stretch to claim that a policy in 2031 is primarily connected to a current crisis which we hope will be an ugly memory a decade from now.

Secondly, assuming they're not able to make the subsidies permanent before then (something already being worked on via both Rep. Underwood's HR 369 and Sen. Shaheen's S.499), if the expanded subsidies happen to run out at the end of 2022 actually gives Dems a very strong issue to campaign on for the midterms. (I should note that Rep. Golden is not currently listed as a co-sponsor of HR 369). As anyone who watched the 2017 Repeal/Replace saga knows, it's a hell of a lot harder to take benefits away from people than it is to give it to them in the first place.

Finally, and most critically...who says that Dems were focusing on the 2-yr subsidy expansion instead of long-term reforms? As I just noted in a 3-part series last week, House Democrats have introduced at least eighteen different healthcare bills which would strengthen and expand the ACA, Medicaid, CHIP or all three. Several of these bills are actually bipartisan, with one or more Republican co-sponsors.

Guess how many of those eighteen bills currently list Democratic Representative Jared Golden on them? Zero.

Don't get me wrong: Simply slapping your name on a bill doesn't necessarily mean that much, and I assume Rep. Golden would vote for most of these bills if they're brought to a full House vote. But in the meantime, even as he's complaining about Dems "not focusing on long-term healthcare reforms", I only see two bills with his name on them so far this cycle...neither of which have anything to do with healthcare (they're both related to political advertising).

Perhaps Rep. Golden should introduce (or at least co-sonsor) a few "long-term healthcare reform" bills before crticizing the rest of his party for actually doing something to make healthcare coverage more affordable for millions of Americans.