Huh...this is interesting. I noted a few weeks back that the Massachusetts Health Connector reported 11% fewer people had enrolled in Qualifying Health Plans (QHPs) for 2021 as of mid-January than they had during the 2020 Open Enrollment Period. At the time, they were running about 6% behind year over year, and attributed the enrollment drop (the first in the MA Health Connector's history since the first Open Enrollment Period back in 2013-2014) primarily to Medicaid enrollment:

Lower membership is primarily the result of decreased new enrollments rather than termination of existing members, likely due to Medicaid protections associated with the federal public health emergency.

One of the first COVID-19 response bills passed last year was called Families First, and among other things it included a freeze on Medicaid disenrollment--that is, anyone who's enrolled in Medicaid during the course of the public health emegency can't be kicked off of the program, even if they potentially become ineligible due to an income increase or for other reasons.

This, combined with the increase in newly Medicaid-eligible enrollees (due to the massive job losses caused by the COVID pandemic) mean that a significant number of people who would otherwise be eligible for subsidized ACA exchange enrollments have instead been shifted over to Medicaid.

However, that data was somewhat out of date. Massachusetts' official 2021 OEP deadline passed a week or so ago, so I asked for updated numbers (they've actually extended enrollment all the way out until May due to the pandemic, but 1/23 was their official deadline, so that's what I'm going with for comparison). Sure enough, the shortfall is actually higher than it was at the time:

Here are numbers as of yesterday, so it catches everyone who took action during the Open Enrollment period.

While the Medicaid surge & retention effects surely account for much or even most of the difference, however, I suspect there's something else going on in Massachusetts specifically.

As Andrew Sprung and I have both written about before, the Medicaid expansion states are definitely lagging behind the non-expansion states in QHP enrollments this year, primarily due to the 100 - 138% FPL income overlap between the two programs in expansion states. HOWEVER, Massachusetts' 12.2% drop is significantly higher than any other expansion state so far (not every state has reported final 2021 numbers yet).

Here's what the tables look like as of today. First, the non-expansion states: 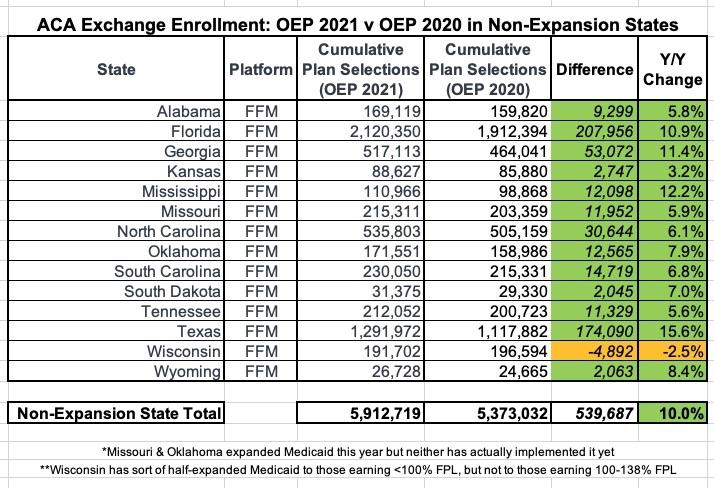 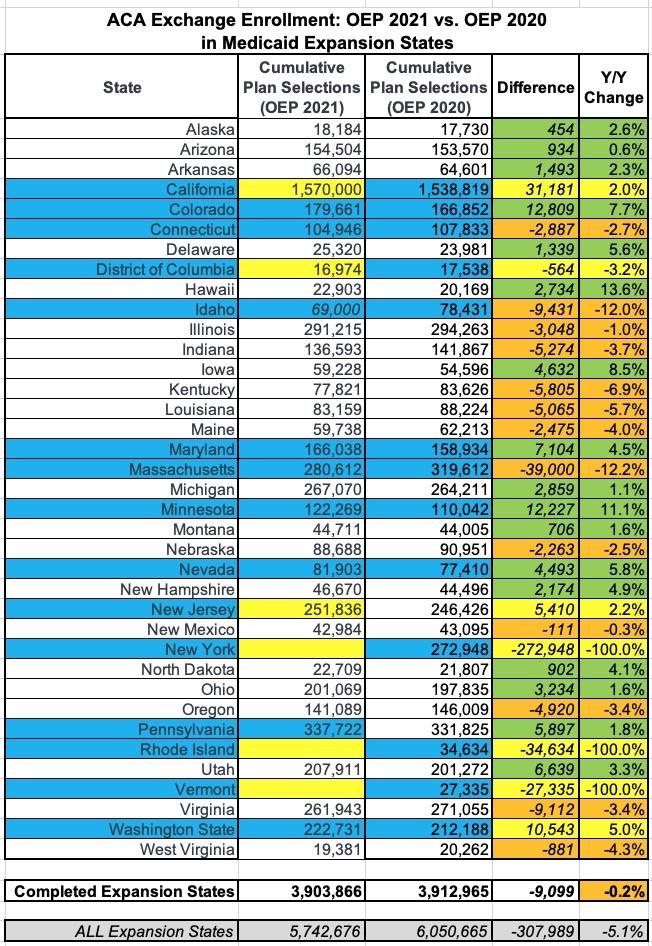 If you only include the states which have reported their final 2021 OEP data, they're running 0.5% behind last year. Again, Medicaid expansion and the disenrollment freeze almost certainly accounts for most of this...but notice that the only other state close to Massachusetts is Idaho. After that, the next-highest drops are Kentucky at 6.9% and Louisiana at 5.7%.

The thing is, Idaho only recently expanded Medicaid anyway, and previous experience has shown that it usually takes two full years for newly-expanding states to complete the process of shifting the 100 - 138% crowd over from ACA plans to the public program (see Pennsylvania and Louisiana), so even ID's 12% drop still makes more sense than Massachusetts' 12.2% reduction.

I've asked my contact at the MA Health Connector whether he has any additional insights as to what's going on in MA specifically. Again, it may be for a good reason--if employer-provided coverage shot up dramatically over the holidays in Massachusetts, for instance, that could account for a chunk of it. Somehow I doubt that, though.