Hot off the presses from Maryland Governor Larry Hogan's office (interestingly, the announcement is being made by him, not by the Maryland Health Connection ACA exchange itself, which is unusual):

ANNAPOLIS, MD—Governor Larry Hogan today announced that more than 166,000 Marylanders enrolled in private health coverage for 2021 through Maryland Health Connection—the largest enrollment ever on the state’s health insurance marketplace—which represents a 4.5% increase of about 7,100 enrollees since the previous year.

“I am pleased to see so many Marylanders taking advantage of our state’s impressive health insurance marketplace, especially as we battle the COVID-19 pandemic, ” said Governor Hogan. “With one of the longest COVID-19 special enrollment periods in the country, we continue to work to increase healthcare access and affordability in Maryland.”

Enrollment was bolstered by a reinsurance program that Governor Hogan and the General Assembly created in 2018 that has lowered consumer prices for the past three years, and by a special enrollment launched in response to the COVID-19 emergency that has covered more than 100,000 Marylanders in Medicaid and private coverage during the past nine months. It was among the longest COVID-related special enrollments in the country.

Enrollment for 2021 grew in every jurisdiction in the state. New enrollments decreased compared to renewals. One-third of those enrollments—nearly 33,000—were in private insurance. The remaining two-thirds—nearly 70,000—enrolled in Medicaid. State enrollment in income-based Medicaid, which is available to qualified residents year-round, increased by 8% since last year.

Despite the unique challenges posed by the pandemic, the Maryland Health Connection call center assisted thousands of consumers in shopping and applying for health insurance during the 45-day open enrollment period from November 1 to December 15.

Unlike most state-based ACA exchanges, Maryland did not offer an extended deadline on theirs beyond 12/15 this year. HOWEVER, as noted in the press release, they did offer what ended up effectively being a full-year COVID-19 Special Enrollment Period as well as their previously-announced "EZ Enrollment" SEP when filing state taxes, so they've certainly gone above & beyond on that front.

As noted above, overall enrollment is up 4.5% vs. last year even though new enrollment is down 32%...because renewals are up by 16%. This makes sense when you remember that around 20,000 people enrolled in ACA exchange plans via the COVID SEP. Assuming the vast bulk of those reenrolled for 2021, they'd count as renewals, not "new" enrollees.

The financial assistance breakout is interesting--almost exactly the same number of enrollees will be subsidized in 2021 as in 2020...but unsubsidized enrollment jumped by nearly 18%. This is no doubt thanks to the whopping 12% average premium rate reduction (which is mostly thanks to the reinsurance program) as well as middle-class enrollees being rightly concerned about the COVID pandemic.

UPDATE: OK, Maryland Health Connection has put out their own press release as well, which includes some important additional information on off-exchange enrollments, which has always been a bit of an obsession of mine as it's difficult to get ahold of in most states:

The pandemic presented a unique challenge for the hundreds of navigators and insurance brokers who, along with the Maryland Health Connection call center, assisted thousands of consumers in shopping and applying for health insurance. They set new records for consumer contacts, even though they were mostly unable to meet face-to-face.

The 45-day open enrollment period for the 2021 plan year began Nov. 1 and ended Dec. 15 at 11:59 p.m. A few hundred additional enrollments will be completed this week for consumers who had begun the process but hadn’t finished before midnight.

Marylanders who purchase their own health coverage also do so off the state health exchange. The plans and rates, by state rule, are the same as those on the exchange, but no financial assistance is available. The reinsurance program did serve to lower most consumer premiums off-exchange as well the past three years, however.

The total individual health insurance market for ACA plans in Maryland grew about 9% from 215,484 to 234,802 both on and off the exchange—a turnaround from the years preceding the reinsurance program.

A 22% increase in off-exchange enrollment is very impressive, and is a complete reversal of the national trend. 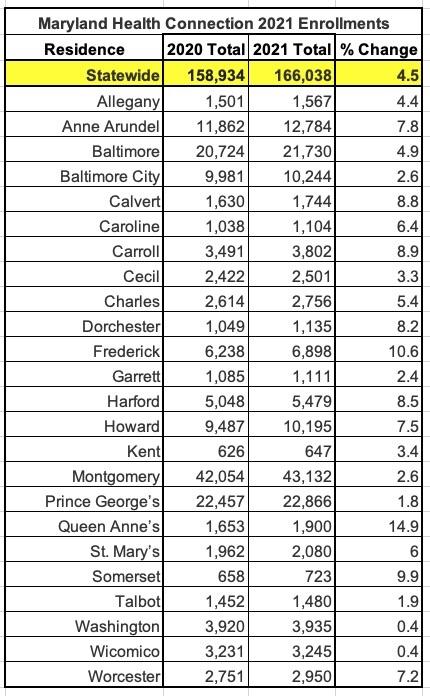 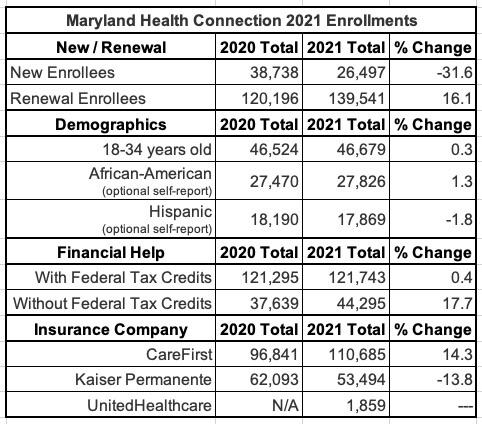