In Week Four of the 2021 Open Enrollment period, 523,020 people selected plans using the HealthCare.gov platform. As in past years, enrollment weeks are measured Sunday through Saturday.

It's a bit tricky to compare the first weekly report against the previous year because the snapshot reports run Sunday - Saturday. Last year Nov. 1st fell on a Friday, so "Week 1" was actually only 2 days; "Week 2" included the following 7 days, for 9 days total; "Week 3" included just 16 days total and "Week 4" included 23 days.

There's nothing surprising about the drop-off from Week 3...Thanksgiving Week always sees a significant drop as people aren't generally in the mood to buy health insurance during a big holiday weekend. Even so, HC.gov is still doing better than last year.

Keep in mind, however, that this is if you include Pennsylvania and New Jersey! Those two states enrolled a total of 178,188 people in the first 30 days last year, so it's actually:

...or 15.3% higher per day than last year, which is pretty good, especially under the circumstances (the pandemic, the looming Supreme Court decision and the ongoing coup attempt by Donald Trump to overthrow the election results).

UPDATE: Andrew Sprung made an obvious point (which I feel stupid about missing, since I was tracking this so closely earlier this spring/summer): A big chunk of the surge in renewals could also simply be people who enrolled via Special Enrollment Periods (SEPs) earlier this year who are renewing. Even if they've only been enrolled for a month or two, they're still considered current enrollees, not new enrollees.

He also reminded me that a chunk of current exchange enrollees likely had to downshift to Medicaid instead if they lost their jobs/income...meaning the net impact on total exchange enrollment could be pretty minimal.

In addition, here's the state-level breakout for the 36 states hosted via HC.gov. I've included last year's "Week 5" (30 day) numbers for comparison, and have adjusted them to account for the 2 missing days this year to get an idea of how each state is performing year over year so far: 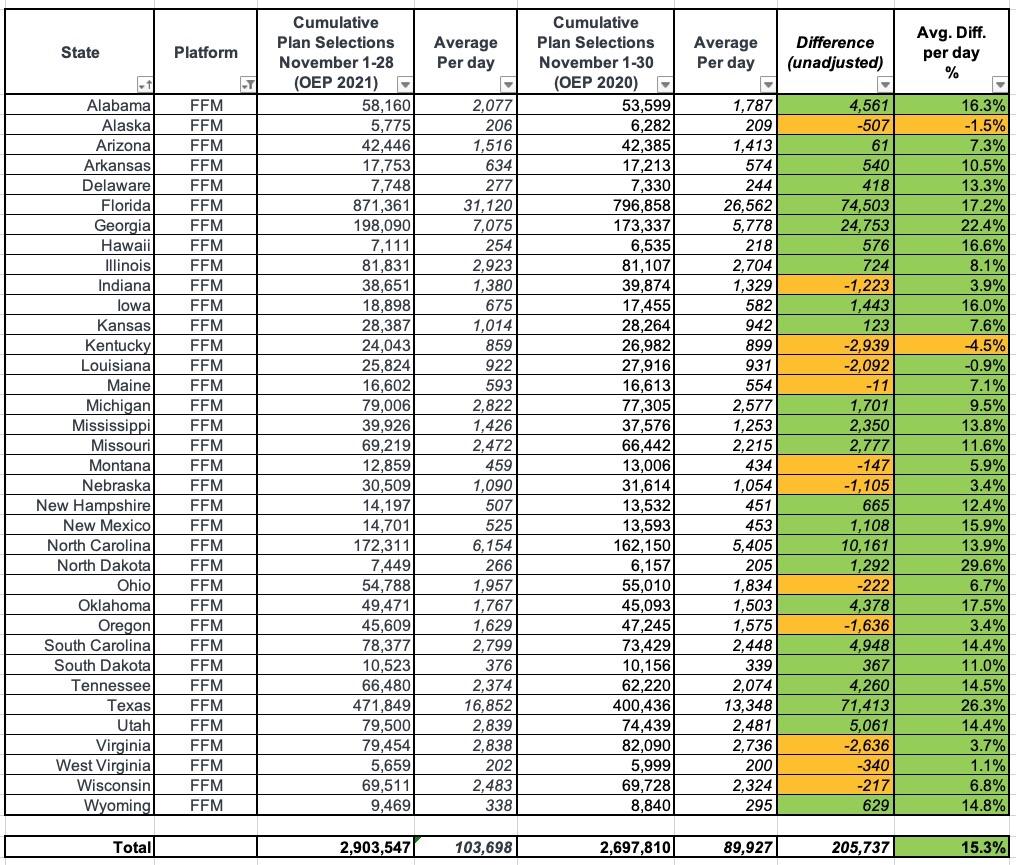