"Look...my opposition isn't to the principle, the vision that there should be...that we should have Medicare. I mean...healthcare should be a right in America. My opposition relates to whether or not a) it's doable, 2) what the cost is, and what the consequences for the rest of the budget are. How are you gonna find $35 Trillion over the next 10 years without having profound effects on everything from taxes on middle class and working class people, as well as the impact on the rest of the budget?"

First of all, here's the deceptively cut-off version of the exchange which is being shared widely on social media by Bernie supporters (and not just random supporters...his campaign manager is doing so as well):

Lawrence: "Let's flash forward: You're President, Bernie Sanders is still active in the Senate, he manages to get Medicare for All through the Senate; it's some compromise version, Elizabeth Warren's version or some other version...Nancy Pelosi gets a version of it through the House of Representatives; it comes to your desk. Do you veto it?"

Biden (after pausing to choose his words carefully): "I would veto anything that delays providing the security and the certainty of healthcare being available now."

...annnnnd cut. The clip being spread by the Sanders campaign cuts Biden's 70-second response off at the 10-second mark, completely ignoring everything he says about wanting to review what the larger impact on the budget and economy would be, as well as him clearly stating that he believes healthcare should be a human right in the United States.

The strange thing is that even that 10-second snippet isn't nearly as damning as Bernie's supporters seem to think it is. He never says "I would veto M4All". He says that he'd veto any bill which delays providing more secure/certain healthcare to people. That may be considered a non sequitur depending on your read of it, but it's not saying he'd veto M4All either.

Second, let's look at the wording of Lawrence's question, which includes a lot of caveats & disclaimers:

In other words, Lawrence isn't asking whether Biden would veto Bernie Sanders' S.1129 Medicare for All bill to begin with.

It could be Elizabeth Warren's "2-Step" version, which amounts to mushing together Biden's own plan with Medicare for America initially, then revisiting it and passing Bernie's bill a few years later. It could be Kamala Harris' "Medicare Advantage Option" version. It could be some other version which may or may not include 100% comprehensive coverage, or may include some level of cost sharing, or may have some other variants.

So Lawrence is actually asking "Would you veto some unspecified universal healthcare coverage bill with unknown provisions?", and Biden responds with some guidelines on what he wouldn't accept in such a bill. Put another way, Lawrence isn't asking whether Biden would veto Bernie's bill, and Biden never says that he would do so.

Third, let's go back to Biden's "anything that delays" and "being available now" points.

All of the above would be before Bernie's "4-year transition period" began, mind you. So even if the bill was passed and signed sometime in 2021 (extremely doubtful), the implementation date would have to be pushed back until at least 2024, with the 4-yr ramp-up period not fully completed until 2027.

For comparison, the ACA itself was signed in March 2010, but most of the major provisions didn't kick in until January 2014...and it was far less disruptive to the existing system than M4All would be. Granted, some provisions (like Medicaid expansion) could have been implemented sooner logistically, but politically they had to be delayed by a few years in order to satisfy several Blue Dog Dems who refused to vote for the ACA unless it came in below a certain 10-year CBO budget score total.

This may seem silly and arbitrary, but if that's what it took to get them to vote for it, what're you gonna do? Most of those Blue Dogs are gone now, but there's still plenty of Dems in the Senate (think Joe Manchin) and even in the House who'd likely have similar demands regardless of how "silly" they may seem.

Other provisions, meanwhile, such as the ACA exchanges, wonky back-end billing code stuff and so on really couldn't be implemented any sooner, as anyone who remembers the HealthCare.Gov launch meltdown can attest to.

Biden's point is that much of his plan (except the actual Public Option portion and a few other items) could be theoretically implemented almost immediately upon being passed and signed into law...or at least as soon as January 1, 2022, anyway. The PO would indeed require a lot of rulemaking/etc. as noted above, but large chunks of it simply beef up the ACA and thus wouldn't involve a lot of heavy legal/fiscal maneuvering.

Heck, some of the more obvious ACA 2.0 stuff (removing the subsidy cap, beefing up the formula, etc) could potentially even be made retroactive to the beginning of 2021 (Congressional Republicans actually tried making the zeroing out of the ACA's individual mandate penalty retroactive at one point, although they eventually decided to bump it out a year).

The only quibble I do have with Biden's response is that in the scenario he's describing, the "where's the money coming from" and "what's the impact on the rest of the economy?" stuff would already have been analyzed, debated & discussed endlessly by all parties involved by the time it reached his desk to begin with...which is exactly why Lawrence's "some version" caveats are so critically important.

In other words, by the time the bill reached Biden's desk it almost certainly would have been changed so dramatically from Bernie's current S.1129 text that it would no longer cost $35 trillion or virtually eliminate private health insurance in the first place...thus meaning he'd likely have no reason to consider vetoing it anyway.

"Our opponents do not speak for us and should never be allowed by the press to put words in the Vice President's mouth," spokesperson Andrew Bates said in a statement. "He did not say 'veto.'" 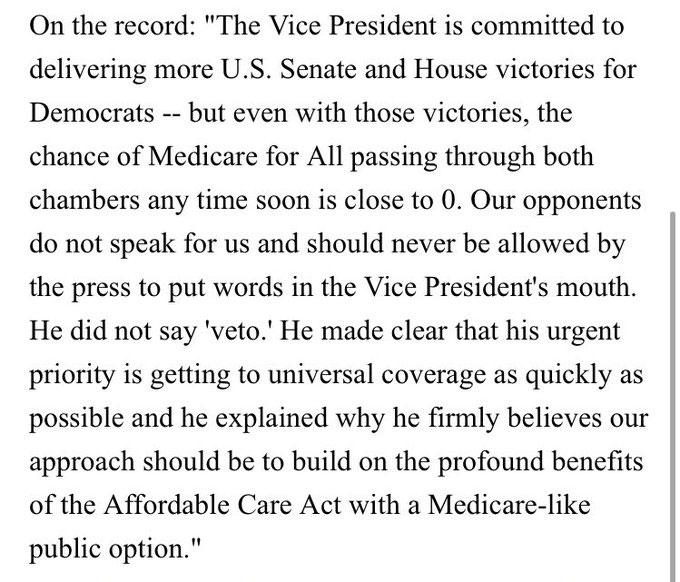