HOST: "Do you really think that enough members of Congress, members of the Senate, would vote to take away the private health insurance that so many Americans have in order to replace it with Medicare for All?"

KHANNA: "Well, that's actually not what the bill does. The bill extends Medicare to everyone; it allows for supplemental private insurance. It's a myth that the bill takes away anything. What it's doing is offering everyone healthcare, Medicare, improved Medicare, which covers long-term care, vision, dental...and I do think there are already a majority of the House Democrats who would vote for it. I mean...I think if you were sitting in 1932 and you asked people "did you believe that FDR would get the Social Security Act in 1935, very few people would've been able to predict that.

HOST: "Just to be clear though...the plan that Senator Sanders offers would take people off their current healthcare plan."

HOST: "That is Congressman Ro Khanna of California who is supporting Bernie Sanders for President. Congressman, thank you for joining us."

KHANNA: "Thank you for having me."

First: Every part of Khanna's statement which is highlighted in yellow above is simply incorrect, and he should damned well know it.

As I explained several times about a year ago, while it's technically true that Bernie's Medicare for All would allow for private "supplemental" health insurance, the list of "supplemental" services which could be insured privately is so tiny as to be laughable. Here's a list of what would supposedly be covered by law under M4All vs. what would still be open to private coverage...and remember, anything covered by M4All couldn't legally be covered by private insurance: 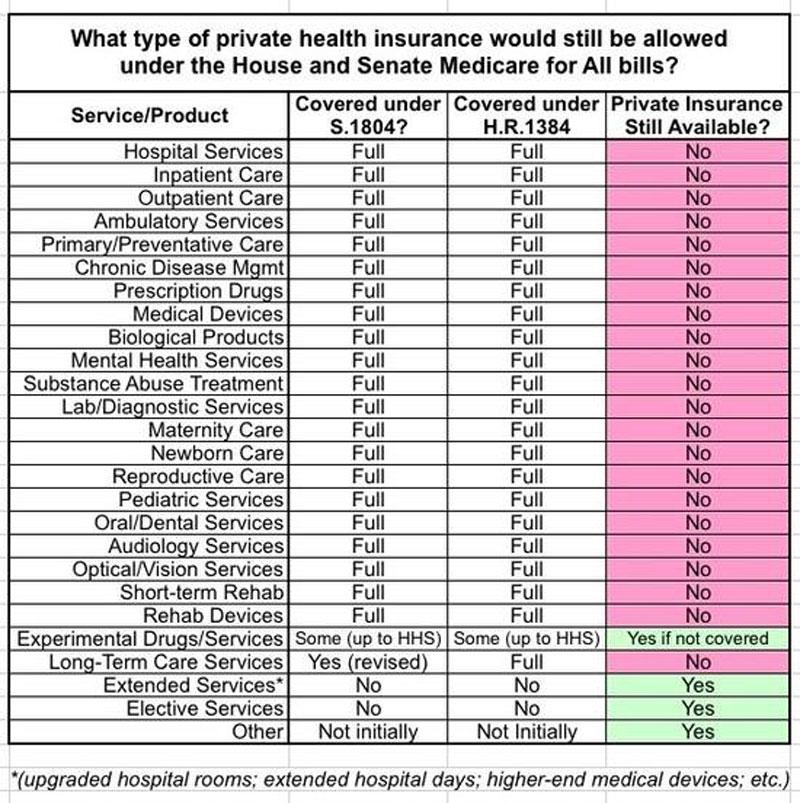 So yes, if you need a private hospital room, an extended stay beyond however many days the HHS Secretary decides M4All would pay for, some types of experimental/cutting-edge drugs or services, certain specialized medical devices not covered under M4All and so forth, then yes, you could theoretically purchase private insurance to cover those things...but a good 98% of all healthcare services or expenses would be off limits for the private insurance market.

Not only is this part of the bill, it's one of the chief selling points Bernie and other M4All supporters keep using to promote it. The whole point of M4All is that it's supposed to be extremely comprehensive, covering virtually every medical/healthcare service or product under the sun. The NPR host even calls him out on this point.

You can certainly argue that pretty much everything should be covered by Medicare and that it serves no useful purpose to keep 99% of the private health insurance industry in business...but to try and claim that Bernie's bill "doesn't take away private health insurance" or that this is a "myth" when it clearly does exactly that is disingenuous to the extreme.

Khanna either knows this and is lying or doesn't know it, which would be even more disturbing. In fact, in the last sentence, Khanna abandons even the "supplemental coverage" fig leaf and flat-out claims that "you're free to still get private insurance under his plan".

Again, when people talk about "private health insurance" they're referring to their major medical policies, NOT "supplemental" policies like MediGap (and again, the whole point of M4All is to eliminate most of the need for MediGap policies as well).

With that said, there's a second part of Khanna's response which made my eyebrows go up even more:

Here's a sitting Democratic member of the U.S. Congress not only comparing a Bernie Sanders to Donald Trump, but implying that if he's elected, the Democratic Party will be "transformed into his image".

I realize that's exactly what many of Bernie's supporters want, but I strongly suspect that most Democrats (and certainly most Independents) don't want to see that happen AT ALL. Republicans, on the other hand, intend on painting every Democrat running for office this November as a mirror image of Bernie regardless, of course.

UPDATE: Late last night Rep. Khanna responded to me on this. Here's our exchange (his tweets in bold):

There are two separate debates. One is whether supplemental private insurance is allowed. It is. The second is how much you want to expand Medicare. The two should not be conflated.

First, thanks for responding. However, I’m not the one conflating the two...you are. The M4All bill if enacted as written would VASTLY expand the scope of Medicare. That’s one of the primary points, in fact. This would reduce the “supplemental” market to a shadow of itself. 1/

I’d be fine with that...but obviously a lot of people wouldn’t. They want the option to continue to but private MAJOR MEDICAL insurance regardless of whether it makes any sense in your view or not. When people say “can I keep private coverage” they DON’T mean supplemental. 2/

Even Sen. Sanders admitted that private insurance would be reduced to “nose jobs and the like” in an interview last spring...in fact, again, that’s a chief selling point. Ironically, insurance for elective cosmetic surgery isn’t really a thing anyway. 3/

Anyone listening to your interview today who didn’t already understand a) what “supplemental” means or b) how few “supplemental” services would be left would ABSOLUTELY assume they could buy a private MAJOR MEDICAL policy under M4All.

The best way to frame this is the way Jimmy Carter, Ted Kennedy, and Wofford all who ran on single payer did. You’re going to get great coverage for free. Big companies and rich pay for it. If you want more, you can get private insurance. That’s true and a winning message!

You’re still missing my point. I agree it’d be silly to WANT the option of sticking with private *major* medical, but loss aversion is a very real thing. You saw the “if you like it you can keep it” backlash in 2013, and that was just a few million people mostly in crappy plans.

The anger was real and potent from just 5-6 million people. Extrapolate that to 150 million or so and you’re facing disaster whether the outrage is justified or not...and misleading on what type of “private insurance” would still be allowed would make it far worse.

A talented politician can sell it and win. Carter did in 76. Wofford did in PA in 91. It has been done.

First, notice how he never actually addresses my primary complaint about what he said in his interview.

However, let's look at what he does say: That President Jimmy Carter, Senator Ted Kennedy and Senator Harris Wofford all campaigned on single payer and won in doing so.

Yes, that's true . Here's what's also true: None of them came close to achieving single payer healthcare coverage. The closest any of these three came was, of course, when Ted Kennedy voted for the weakened Senate version of the ACA shortly before he passed away.

In fact, Khanna bringing up Carter and Kennedy in defense of lying about one of the core tenets of Bernie's "Medicare for All" bill probably wasn't a good move:

...While scores of Democrats in Congress and on the presidential campaign trail advocate a single-payer health care system for all Americans immediately, other Democrats embrace the idea of universal coverage as the ultimate goal, but believe it should be achieved incrementally. To some this seems like a repeat ofthe late 1970s when Democrats allowed the perfect to become the enemy of the good, and nothing was done on health care---for another 30 years.

...The next Democratic president, Jimmy Carter, was in step with his predecessors as he wanted to extend health care to all Americans, but the economic conditions of that time were very different from 1965. While both houses of Congress were Democratic in 1977-78, inflation was out of control and the economy as a whole was weak, straining the resources of the federal budget.

...While Carter embraced universal coverage as the ultimate goal, he believed it should be achieved incrementally, not only for affordability but also for feasibility. An incremental approach, Carter contended, would aid the federal government’s ability to digest and administer such a huge and complex new system.

...Not everyone agreed...Senator Edward M. Kennedy (D-MA) was the most vocal spokesman, and he was also, many suspected, planning to challenge Carter for the Democratic presidential nomination in 1980, using national health care as a defining issue.

In 1977 Carter’s White House reached out to Kennedy to find a middle ground. It became clear early on that there was a significant difference between the two camps. Over many months, the two parties tried to compromise, but the talks eventually faltered over the specific phasing-in of Carter’s proposal. The unbridgeable gaps were fully revealed at the final meeting between Carter, Kennedy, and their staffs in the Oval Office on July 28, 1978,...Kennedy left the White House and soon announced he couldn’t support whatever the Administration offered on health care and he would write his own comprehensive bill, which he unveiled on May 19, 1979.

A month later, Carter delivered a message to Congress calling for catastrophic coverage for all Americans so that families who incurred severe and costly injuries or illnesses would not be financially destroyed. He also called for “comprehensive” coverage of 16 million low income Americans (Medicaid). It was a thoughtful, generous and responsible proposal, and it won significant early support on Capitol Hill, not least because many Democrats saw it as an essential step toward universal coverage.

...With no major issues dividing the candidates -- save for the timing but not the goal of universal coverage -- Kennedy’s campaign got off to a faltering start. ...Even after Carter captured sufficient delegates to win the nomination following a brutal series of primaries, the UAW would not back down from its all-or-nothing position. Neither would Kennedy.

The hard-fought contest took its toll on both candidates and, tragically, on the issue of health care. In short, the dynamics of the 1980 primary campaign inevitably precluded the kind of legislative process that might have enabled universal catastrophic coverage to become law. An important opportunity was lost; the American people would have to wait another 30 yearsfor major health care reform.