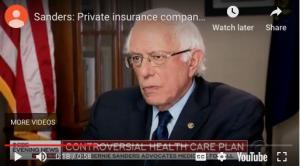 This refers to the fact that the MFA bills (in both the House and Senate) do allow for private coverage of anything which isn’t covered by MFA itself...basically, supplemental coverage of things like elective procedures, experimental drugs, enhanced services (private hospital rooms? upgraded wheelchair models? etc) and so forth. However, how wide a range of services that would include has always been a bit fuzzy.

For example, the MFA language states that hospitalization would be “comprehensively” covered...but doesn’t list any limits on hospital days, for instance. It doesn’t clarify whether “comprehensive” coverage of medical devices includes the bare bones model or the enhanced one with digital readout and built-in wi-fi. Most of those specifications would be left up to the HHS Secretary and/or a board of some sort to determine. Whatever they come up with, presumably private supplemental insurance could cover the rest.

I whipped up this table which I believe is a fairly accurate depiction of what the House/Senate MFA bills would cover or not cover. As you can see, caveats above aside, it doesn’t leave much room...and again, that was kind of the point: 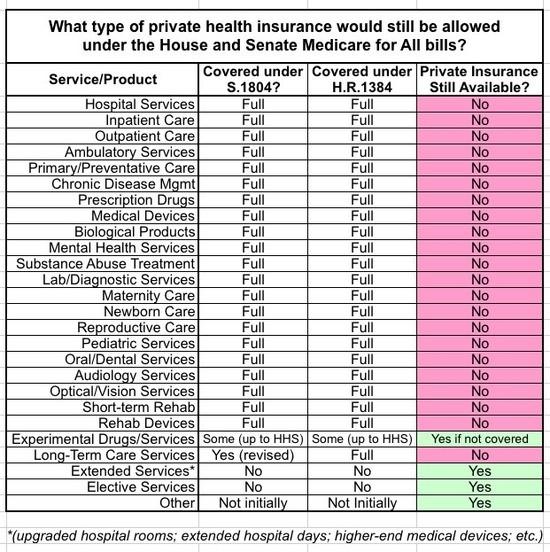 And yet, some still argued with me about this.

It's important to understand that I'm not making a value judgment about whether eliminating private health insurance companies is a good or bad thing--I just wanted MFA die-hard supporters to make it clear what the official stance on the issue is.

Sen. Bernie Sanders (I., Vt.) said private health insurance companies would be reduced to covering cosmetic surgery under his vision of a "Medicare for all" program.

..."What happens to those insurance companies after your plan is implemented?" O'Keefe asked.

"If you want cosmetic surgery—under Medicare for all, we cover all basic health care need—I suppose if you want to make yourself look a little bit more beautiful, work on that nose or your ears, they can do that," Sanders said.

"So basically BlueCross BlueShield would be reduced to nose jobs," O'Keefe said.

Before anyone start screaming at me for linking to Free Beacon (a conservative site), note that the link was provided to me by a staunch MFA advocate, and the exchange and quotes above are 100% in context.

So there you have it: For good or for bad, under the House/Senate Medicare for All bills, Bernie Sanders himself says that private health insurance companies would indeed be reduced to a pathetic shadow of their former selves. Glad we cleared that up.