It's also vitally important to understand that the "$33T" in question (or an average of $3.3 trillion per year) is not a measure of increased TOTAL healthcare spending, but of the increase in federal taxpayer funded spending. Why? Because it would be completely replacing ALL existing private spending as well as all existing state tax funded spending. Premiums? Gone. Deductibles? Gone. Co-pays? Gone. Prescription drug payments? Gone. I should also note that the $33T-additional-federal-spending-over-a-decade figure is pretty close to this 2016 analysis of Bernie's earlier Medicare for All proposal by the Urban Institute, which pegged it at $32 trillion from 2017-2026.

Lots of people have pointed out the 10-year factor already, but there's a second major thing which both Single Payer advocates and opponents need to keep in mind: The study correctly assumes that the bill in question wouldn't actually go into effect until 2022. Why? Simple: It assumes the Democrats sweep both houses of Congress and the White House in 2020, with a progressive Democratic President taking office in January 2021, Bernie's M4A bill being swiftly passed and signed into law. If so, it would go into effect on January 1, 2022 and be fully ramped up over a 4-year period, reaching 100% status by January 1, 2025.

Why is this important? Because of inflation...and not just inflation, but medical inflation, which is officially called "Medical Trend" since it tends to outpace overall inflation by a factor of 2:1 or more (that is, healthcare spending tends to go up quite a bit faster than inflation in general, which is kind of the problem in the first place). The National Health Expenditure projections from CMS currently expect total healthcare spending to increase around 5.5% per year through 2026. The Mercatus analysis assumes this pace will continue through 2031 under the current system.

That means that Mercatus is assuming that under current law/policy, total national healthcare expenditures will total around $4.6 trillion in 2022 and go up another 5.5% each year for the next 9 years after that, culminating in $7.65 trillion in 2031. That's an average of $5.97 trillion per year for the 2022-2031 decade, up from the $3.3 Trillion we spent collectively in 2016.

Under Bernie's M4A proposal, if passed, signed into law and implemented exactly as the current version lays out, Mercatus projects that total national healthcare spending would come in at around 2% less in the first year, increasing gradually until it saved about 4% in 2031. Over the full 10-year period, they project total savings would be around 3.4% or just over $2 trillion nationally.

I'm not going to go into a deeper analysis right now; plenty of others have already done that. Obviously there's a lot of controversy over both Sanders' and Mercatus' assumptions at play, and of course it's very difficult to project 10 years out, much less 15. 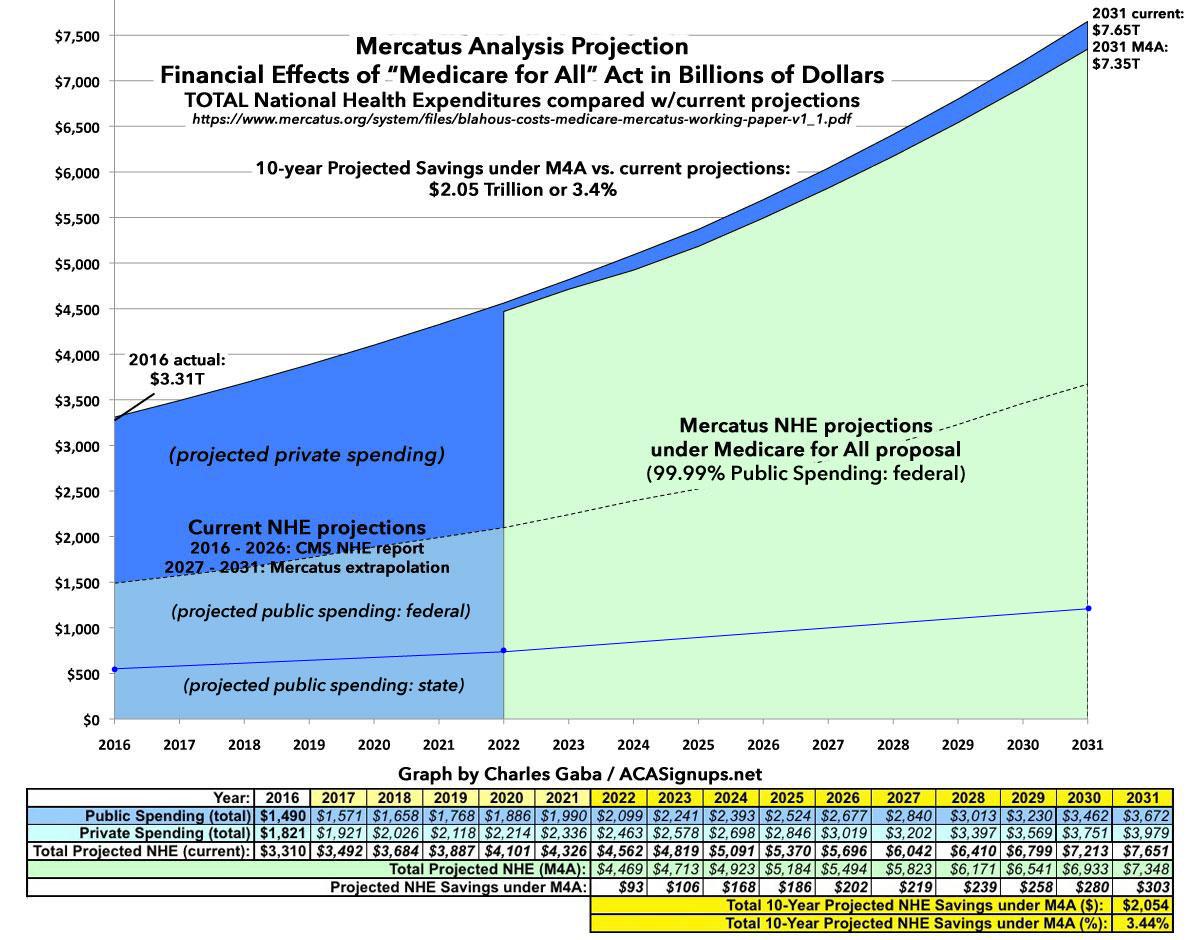 To clarify: I'm not praising or trashing this analysis. It gets pretty deep into the weeds, and I'm swamped right now. It comes from a right-wing think tank, but also includes some support from Emory University professor Kenneth Thorpe, who worked for the Clinton Administration in the '90's and who was in the news two years ago when he wrote an analysis of Bernie's prior Single Payer proposal which similarly found that it would cost quite a bit more than Sanders projected.

My point here isn't to do a deep dive, but simply to visually display the bottom line: A right-wing think tank concluded that yes, a 100% universal, 100% comprehensive, 100% actuarial value, $0 out-of-pocket, 100% federally-funded, mandatory-participation national single payer system would indeed save about 3.4% over the first 10 years it was in place vs. currently projected national healthcare spending.

Naturally, left-leaning groups/single payer advocates will challenge their findings by claiming that the savings would be far more than that, but the fact remains that yes, even these guys think it'd save more than a few bucks ($2 trillion isn't chickenfeed).

Whether or not it would be worth saving 3.4%...or let's call it 10% if we assume there's some conservative bias here...while also covering the remaining 10% of the population who doesn't receive anything beyond Emergency Room treatment, on the other hand, is a completely different debate.

UPDATE: It's important to reiterate that the graph/table above assumes everything is implemented exactly the way the M4A plan intends...including all doctors/hospitals/clinics/drug companies/etc. being paid at Medicare rates across the board, which are of course quite a bit lower than most private insurance reimbursement levels.

The Mercatus analysis also runs the numbers for what they think total spending would look like if only administrative savings were taken into account; in that scenario it looks like this: 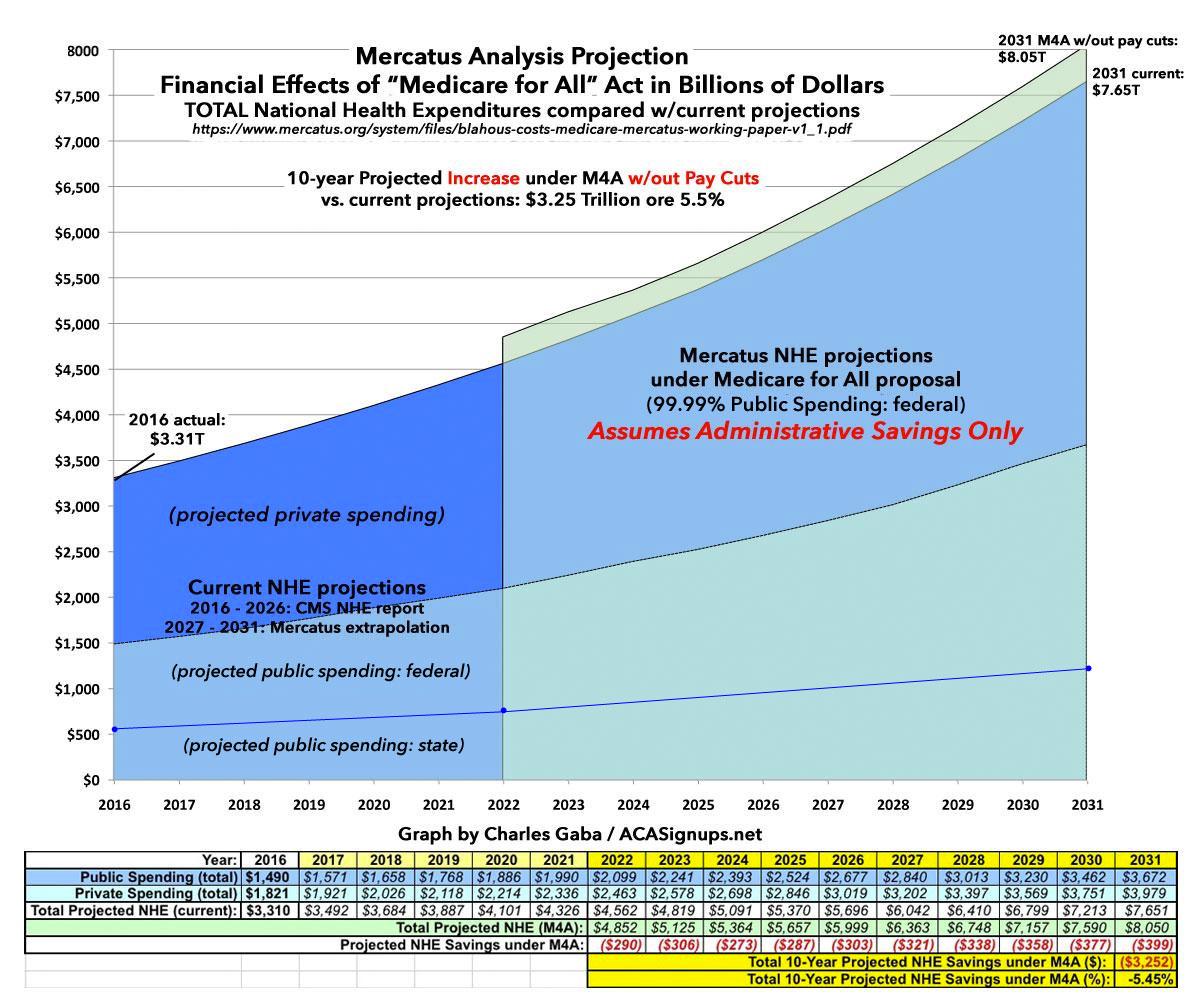 Their reasoning is that while there would be about $1.6 trillion in savings thanks to administrative efficiency (no redundancies, less paperwork, etc etc.), this would be more than cancelled out by an additional $4.8 trillion in increased utilization of healthcare services (partly due to the remaining 10% of the population finally receiving full coverage, but also because there'd be no out-of-pocket costs for anyone to discourage them from going to the doctor, getting that prescription, etc).

Again, I have no idea how sound these projections are, but it helps to have a visual reference point.