This just in via CMS:

Effectuated Enrollment for the First Half of 2019

This report provides average monthly effectuated enrollment and premium data for the individual market Federal and State-Based Exchanges for the first six months of the 2019 plan year. The Centers for Medicare & Medicaid Services (CMS) publishes effectuated enrollment data semiannually to provide a more accurate picture of enrollment trends for the Exchanges than indicated by the number of individuals who simply selected a plan during Open Enrollment. For coverage to be considered effectuated, individuals generally must pay the first month’s premium for the plan.

As of September 15, 2019, an average of 10.2 million individuals had effectuated their coverage through June 2019. The average effectuated enrollment for the first six months of 2019 was approximately 85,000 individuals lower compared to the same time period in 2018, which represents a 0.8 percent decrease.

In other words, 310,000 fewer people selected policies, but only 225,000 fewer dropped their coverage during the year, which is a higher retention rate. Whether you see this as good or bad news depends on your persepctive, I suppose...

So average premiums dropped $2.60/month...but APTC assistance dropped $5.27/month for those receiving it.

Not a huge price drop or increase either way, but those few extra bucks per month mean a lot more to the subsidized enrollees than the few bucks saved per month do to the full-price crowd...

APTC enrollment is the total number of individuals who had an active policy at any point from January through June 2019, who paid their premium, if applicable, and received APTC. APTC is generally available if an individual's estimated household income is between 100 and 400 percent of the federal poverty level, and certain other criteria are met. An individual was defined as receiving APTC if the applied APTC amount was greater than $0; otherwise, an individual was classified as not receiving APTC.

CSR enrollment is the total number of individuals who had an active policy at any point from January through June 2019, who paid their premium, if applicable, and received cost-sharing reductions (CSR). A consumer is generally eligible for CSR if the individual is eligible for APTC, has an estimated household income between 100 percent and 250 percent of the federal poverty level, and is enrolled in a health plan from the silver plan category. American Indians and Alaskan Natives are eligible for CSRs under different criteria.

Here's the state-by-state breakout for the first six months of 2019: 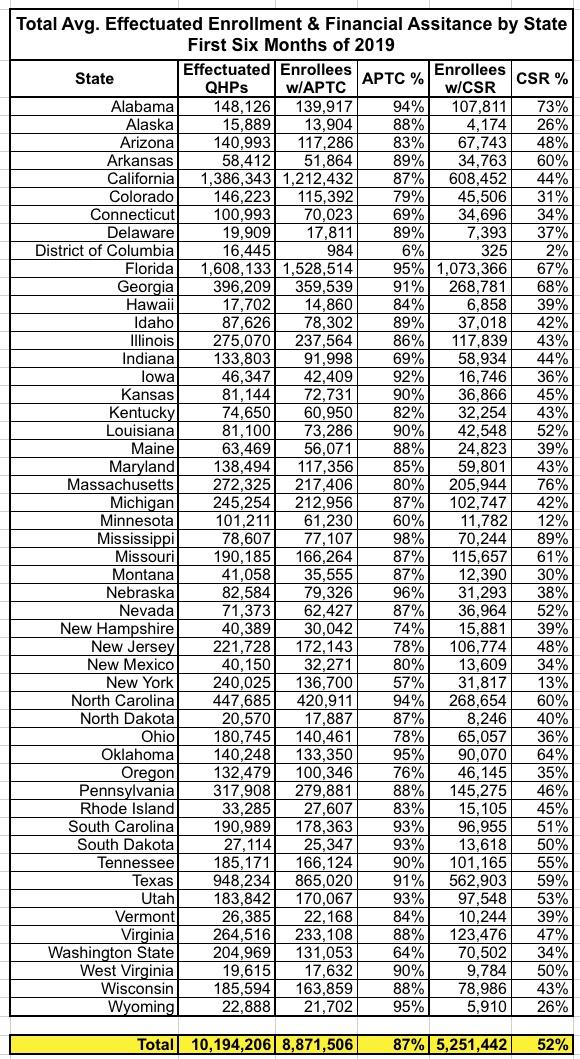 As usual, the District of Columbia has barely any enrollees receiving either APTC or CSR since DC residents earning up to 210% FPL anyway. This leaves almost no enrollees earning 210 - 250% FPL (and some of them probably choose Bronze plans anyway). The CSR percent is also very low in Minnesota and New York; in those cases it's because they both have Basic Health Plan programs in place which cover residents earning 138% - 200% FPL

For what I believe is the sixth year running, Massachusetts again has the lowest avg. unsubsidized premiums in the country, while Wyoming has the dubious honor of having retaken the crown for highest average premiums from Iowa.

As noted above, however, due to the weird dynamics of Silver Loading and other plan pricing oddities, however, there's a somewhat inverse relationship between unsubsidized premiums and subsidized premiums. For instance, in Hawaii, premiums went up 5.7% ($35/month)...but APTC assistance went up 13.6% ($67/month), so the average net premium actually dropped by around $32/month or $379 for the year.

Conversely, in Tennessee, average premiums dropped by a whopping 18.1% ($146/month)...but this actually led to net premiums going up around $460 for the year for subsidized enrollees. 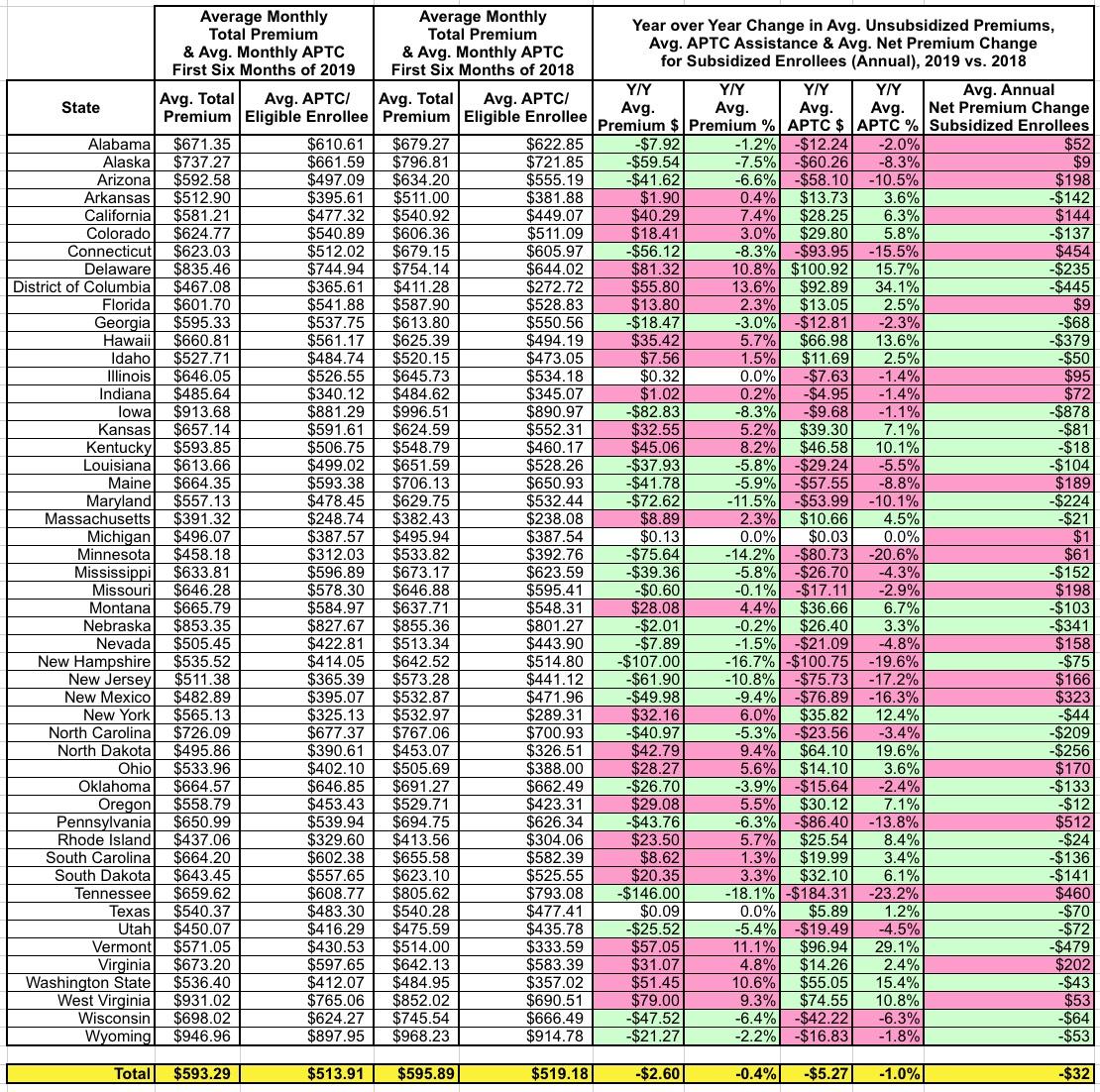