With my big MLR Rebate project finally out of the way, I have a backlog of other write-ups, including several approved 2020 premium rate changes. First up is tiny Rhode Island.

As you may recall, back in July the Rhode Island insurance commissioner announced that the state was following New Jersey's model: They're reinstating the individual mandate penalty, and using the revenue from that to help fund their just-approved state reinsurance program to reduce unsubsidized premiums by 5-6 percentage points:

Like nearly all states with reinsurance programs, Rhode Island chose to use an overall attachment point model with parameters set annually by HSRI. For 2020, the program would be expected to reimburse insurers for 50 percent of claims between $40,000 and $97,000.

This isn't a particularly robust reinsurance program (for comparison, Minnesota's program covers 80% of claims between $50,000 - $250,000, reducing premiums by about 20%), but 5 points is 5 points. Without the one-two mandate/reinsurance punch, average premiums in Rhode Island would've gone up around 6%; with them, the carriers were only requesting an 0.8% increase next year.

After reviewing the filings, however, the RI Insurance Dept. regulators have shaved rates for both Blue Cross and Neighborhood down another point or so:

CRANSTON, R.I. – Health insurance premium rates for 2020 have been approved by Rhode Island’s Office of the Health Insurance Commissioner (OHIC). Overall, OHIC saved Rhode Islander’s $15,566,000 by cutting insurer’s proposed rate increases. Notably, the Rhode Island 2020 rates for individual market plans had an overall average decrease compared to rates last year, due in large part to the upcoming implementation of a statewide reinsurance program which Governor Raimondo announced the approval of this morning.

This reinsurance program, championed by Governor Raimondo, approved by the General Assembly, and developed by HealthSource RI, originated as a recommendation from a broad-based RI Market Stability Workgroup. The program is designed to pay for some of the most expensive insurance claims, resulting in lower premiums for consumers. This year during the rate review process insurers were asked to submit rates with reinsurance, and without. Without the reinsurance program, average individual rates would have increased up to 7% higher than 2019 rates. With the reinsurance program, many Rhode Islanders on the individual market will be paying less in premiums in 2020 than they did in 2019.

“It is critical for Rhode Islanders to have access to quality, affordable health insurance options, and this reinsurance program is helping to make that possible.” Governor Raimondo said. “We are thrilled that as premiums continue to increase across the country, many Rhode Islanders on the individual market will actually see their premiums go down.”

Governor Raimondo included the reinsurance program in her 2020 budget which was approved by the General Assembly in June. In order to be implemented, Rhode Island needed to submit an innovation waiver to the federal government, which the US Department of Health and Human Services has approved this past week. Similar programs have successfully been implemented in other states, reducing the price increase of plans on the individual market and saving consumers thousands of dollars.

As I warned New Jersey and DC last fall, Rhode Island is going to have to actually let residents know about the penalty in order for it to be effective, whether they want to or not.

...In Rhode Island, for 2020, the large group market had the biggest overall rate increases with the lowest change being 8.1% (United Healthcare and Blue Cross Blue Shield) and the highest increase being 10.6% (Tufts Health Plan). The small group market rate changes varied, with the lowest being a decrease of .09% (Neighborhood Health Plan) and the largest being an increase of 11% (Tufts Health Plan). Many factors contribute to the continued growth in insurance premiums, including policy decisions at the federal level, but the main driver continues to be the rising costs of medical care. 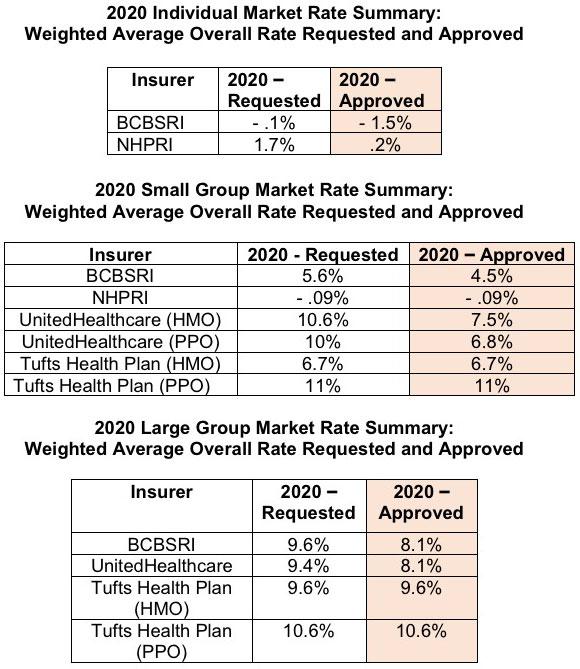 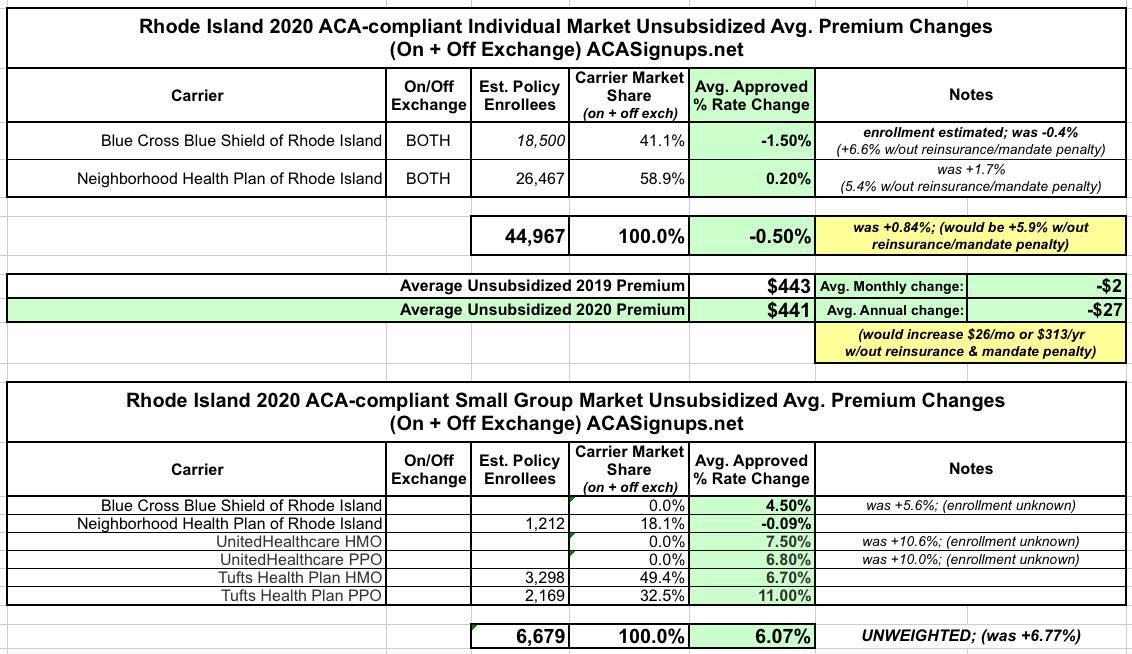