I've finally analyzed and posted my 2020 premium rate filing analyses for all 50 states (+DC), so this seems like a good time to take a look at the big picture. The table below summarizes the preliminary filings for every state, with four exceptions where the approved (or at least mostly-approved, in the case of Oregon) average rate changes are listed. Nationally, it looks like insurance carriers are only requesting an average premium increase of about 0.6% for the ACA-compliant individual market in 2020. A few caveats:

With all that in mind, here's the full table for all 50 states. The weighted average (that is, weighted by what portion of the total indy market is enrolled in each state, both on & off-exchange) comes in at around 0.6%...the lowest it's ever been since the ACA exchanges launched: 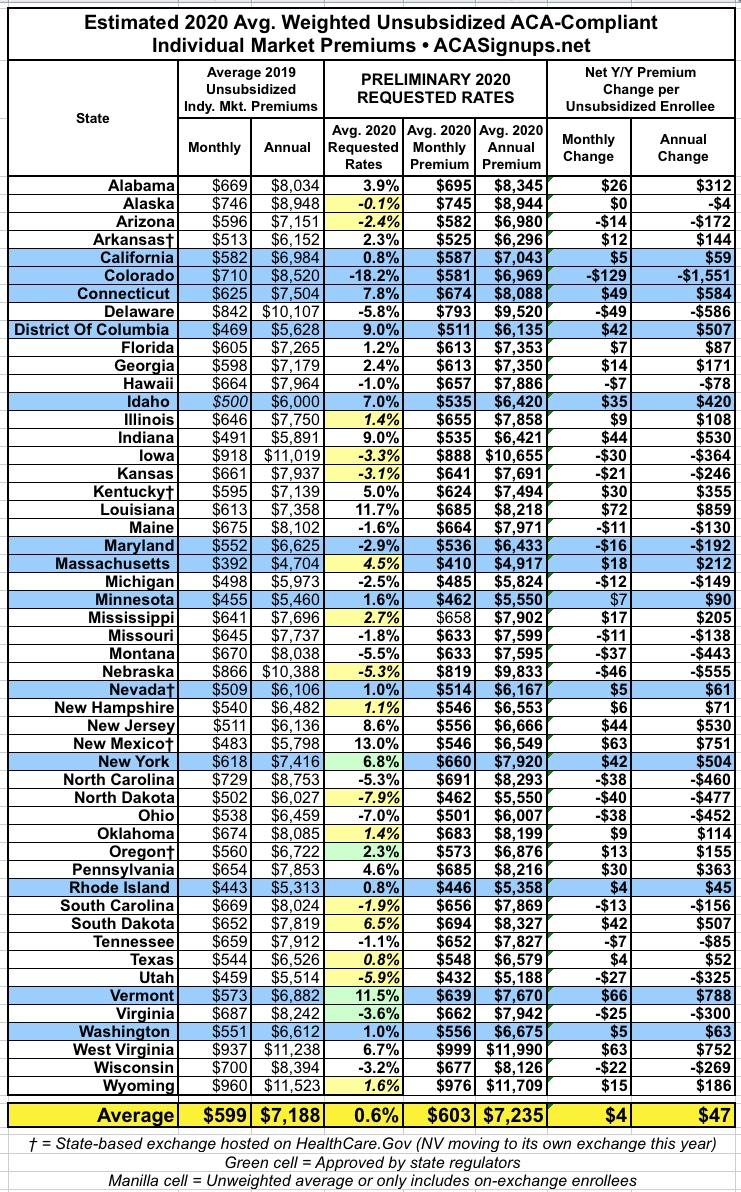 The four states which have posted their approved rates comprise around 6.4% of the total ACA market nationally; between the four, 0.3 points was shaved off of the national average increase. I have no idea what changes will be made by state regulators in the other 47 states, but assuming they reduce their approved rate changes by a similar amount, the national increase would be further reduced by up to another 2.9 percentage points...for a potential final weighted average reduction of 2.3% nationally. If so, that would be the first time that overall unsubsidized individual market premiums dropped year over year. We'll have to see how that plays out, however.

Of course, there's a huge range from state to state. Based on the table above (again, this is mostly requested changes, not final/approved), Colorado should see the biggest reduction in 2020 premiums thanks to their just-approved ACA Section 1332 reinsurance waiver, with an average drop of over 18% (North Dakota had theirs approved the same day). At the opposite end, New Mexico is looking at a 13% increase for reasons unknown.

I'll continue to swap out the requested rate changes for approved ones as they come in, but the bottom line is that, as I noted a week ago, ACA Medical Loss Ratio rebate checks are likely to be very large this fall and huge next fall...right in the middle of the general Presidential election. Expect the Trump Administration to attempt to claim credit for both the flat-ish rate changes and the large rebate checks, even though a) the MLR rule has been part of the ACA since it was signed into law and b) Trump is also primarily responsible for the huge rate increases in 2018 (due to his cutting off of CSR payments), while he and the GOP zeroing out of the ACA mandate penalty was responsible for 2019 premiums going up 2.8% instead of down by around 5.4% on average.

They get zero credit from me for "solving" problems which only existed in the first place due to their deliberate actions.