IT'S OFFICIAL: House Democrats WILL move forward with ACA 2.0 bill!

UPDATE 3/26/19: I'm watching the actual press conference right now. I just wanted to note that there will likely be a few changes/tweaks in the bill/bills introduced today vs. last year's H.R.5155, but it sounds like it'll be about 95% the same. More details this evening.

Back in early January, in an MSNBC interview with Joy Reid, House Speaker Nancy Pelosi noted that she did indeed intend on moving on legislation to, at the very least, raise or remove the ACA subsidy income threshold to allow financial assistance to be available to more people:

“Raise the income level at which people can get subsidies so more people would be able to get the subsidies,” Pelosi told MSNBC’s Joy Reid in an exclusive interview that aired Friday night and this past weekend. “I think that’s very, very important.”

At the time, she was pretty vague about what that actually meant, but I was hoping she was talking about H.R.5155, the "Undo Sabotage and Expand Affordability of Health Insurance Act" which was introduced last March by Rep. Frank Pallone, Richard Neal & Bobby Scott. It's an excellent bill with a terrible name (USEAHIA? Really?), so I've renamed it "ACA 2.0", which is both easier to remember and more descriptive, because that's exactly what it is: A major upgrade for the Affordable Care Act which repairs the damage done to it by Congressional Republicans and the Trump Administration, protects it from further sabotage in the future and strengthens it tremendously.

My suspicions were confirmed a few weeks later via an Associated Press story:

Responding to written questions from The Associated Press, Pelosi called the ACA "a pillar of health and financial security," comparing it to Medicare, Medicaid and Social Security. "Democrats have the opportunity not only to reverse the years of Republicans' health care sabotage, but to update and improve the Affordable Care Act to further lower families' premiums and out-of-pocket costs, and expand coverage."

Legislation from Energy and Commerce Chairman Frank Pallone, D-N.J., Ways and Means Chairman Richard Neal, D-Mass., and Workforce and Education Chairman Bobby Scott, D-Va., would broaden the number of people who can get financial assistance with their premiums under the Obama health law, and undo the "family glitch" that prevents some from qualifying for subsidies. It would also restore the HealthCare.gov advertising budget slashed by Trump and block some of his administration's health insurance alternatives.

Yep. That's HR 5155 alright...except that as important as those items are, the bill does a lot more. In fact, here's a full list of what the bill would do:

It's important to note that the legislation being introduced may be different from last year's version, although it sounds like any changes would be minor...there may be a few provisions added or removed, or the existing ones may be tweaked slightly.

Here's how the financial subsidy formulas would change under H.R.5155 vs. the current formula. Remember, "APTC" subsidies reduce premiums; "CSR" subsidies reduce deductibles, co-pays and coinsurance (out of pocket expenses): 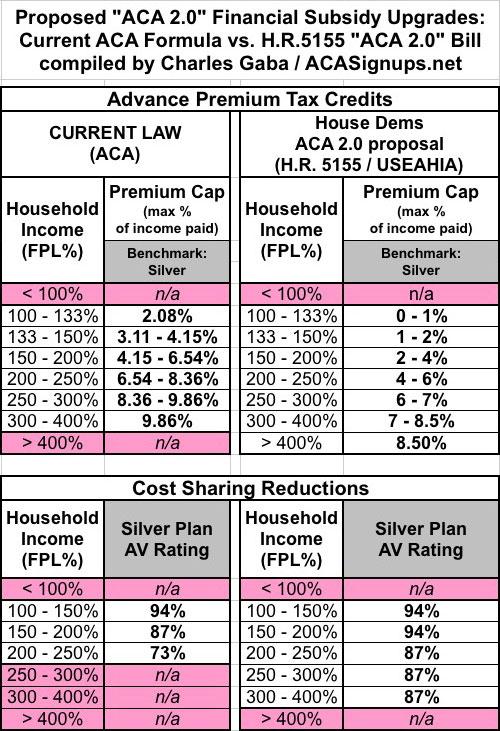 The most obvious change is that the ACA's infamous subsidy cliff would be eliminated. Right now, anyone earning even $1 more than 400% of the Federal Poverty Level ($49,960/year for a single adult; $103,000 for a family of four) immediately loses all ACA subsidies instantly, which could mean losing out on thousands of dollars in assistance. This is the biggest source of complaints about the ACA from middle-income Americans who aren't covered through their employer.

In addition to eliminating that problem, H.R.5155 would also make the subsidy formula itself more generous for both premiums and out-of-pocket expenses. For instance, a single adult earning $30,000 (240% FPL) would go from having to pay 8% of their income for a Silver plan ($200/month) to just 5.6% ($140/month), and their deductibles and co-pays would drop dramatically as their policy went from covering 73% of their medical expenses to 87%.

The biggest thing which House Democrats need to keep in mind is how dramatically the CSR funding situation has changed over the past year and a half. Fortunately, Pallone, Neal and Scott were already aware of this when they introduced the bill last year, since the 3rd and 4th bullet points above directly address it: Yes, HR5155 would formally appropriate CSR reimbursement payments, but it would also beef up the underlying subsidy structure as well, which means those currently being helped by the Silver Loading workaround wouldn't be hurt by the revamp either. This is critically important, and I'm glad to see it front & center in the legislation.

I should also note that a similar bill was also introduced in the Senate by Elizabeth Warren and five other Democratic Senators (four of whom, I should note, are running for President...including Bernie Sanders). That bill is obviously unlikely to go anywhere, but that's another discussion.

I didn't hear much about this development since late January other than some House Committee hearings regarding a few bills with "standalone" versions of a few of the individual bullet points above (one bill would reinstate the Reinsurance program; the second would restore the HC.gov marketing & navigator program budgets; the third would provide funding for state-based exchanges)...until about an hour ago (h/t Jesse Ferguson):