David Anderson explains why over at Balloon Juice:

...as I have argued many times, the termination of cost sharing reduction subsidies is not sabotage. It instead has actually strengthened the market. The cohort of people earning between two and four times the federal poverty level are seeing much lower net of subsidy pricing.

I need to add an important clarification to how Anderson words this: The CSR reimbursement cut-off by Trump was intended to be sabotage. It really was...he flat-out said that's what he had in mind, since he was trying to "kill Obamacare". He honestly thought that cutting off CSR payments would cause the ACA exchanges to "explode" and thus the ACA would collapse.

He didn't understand how CSR payments actually work...and this, combined with the clever Silver Loading/Silver Switcharoo workaround which the carriers, exchanges and state regulators came up with, resulted in the sabotage mostly backfiring:

As I noted in October 2017, the world has changed:

Inaction means, over the long run, more people will get low(er) out of pocket expenses/lower deductible insurance for lower premiums through structured, subsidized exchanges. I think that after a year or two, the expected social contract of what “acceptable” publicly subsidized insurance will move to Gold instead of Silver plans. Lower cost Gold plans and very affordable Bronze plans will increase long run uptake of PPACA insurance among people who earn between 200 percent and 400 percent FPL. This is a group with more political power than Medicaid recipients and Medicaid recipients were able to successfully mobilize to defend their interest this year. Appropriating CSR and thus maintaining the status quo is closer to conservative policy and ideological preferences than resetting the effective benchmark to Gold.

This last part is actually more of a reference to the historical tidbit that then-Senator Barack Obama opposed having an individual mandate ("shared responsibility") coverage requirement during the 2008 primary campaign, and only came around to supporting Hillary Clinton's position requiring one later on.

There can be good reasons for liberals and Democrats to agree to appropriate CSR. Rep. Pallone’s 2018 HR 5155 appropriated CSR but used the fund flow to expand CSR eligibility and levels as well as expand premium tax credit subsidy eligibility to more people. But the fundamental nature of the ACA has changed due to the termination of CSR and the politics have changed since October 2017 when there was a legitimate fear that not paying CSRs would cause the market to collapse.

But that trade-off has to be made with a recognition of reality. Terminating CSR has created a different market that is more favorable, in isolation, to Democratic policy preferences than Republican policy preferences. The New Dem coalition needs to realize that it was not effective sabotage but a backdoor incidental strengthening.

In a nutshell, here's what Anderson is talking about:

In fact, the only down side here from a Democratic/progressive POV is that many middle class ACA enrollees are being hit hard by this situation, since they don't qualify for any ACA subsidies at all. This means that in states which aren't doing the full Silver Switch route, those earning over 400% FPL are stuck being hit with the full CSR load if they stick with Silver. They can usually move to Gold or Bronze plans to avoid the hit, but that's hardly ideal for them.

Even so, a lot more people are being helped by Silver Loading than hurt by it...which means Democrats should ONLY agree to appropriate CSR payments if they get something big in return.

And what should they demand in return? Again, two things: 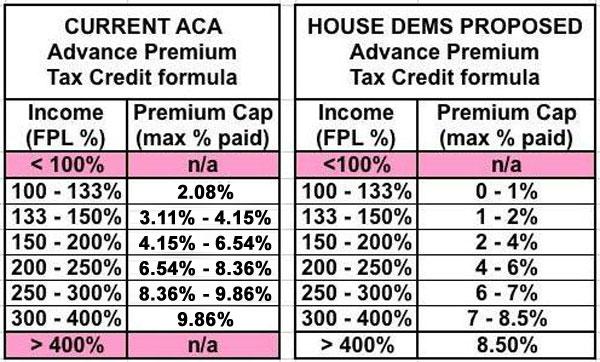 How much would each of these cost? Well, the estimates vary depending on a lot of factors, but my guess is it'd bring in several million additional middle-class exchange enrollees (those earning over 400% FPL...mostly between 400-700%, I'd imagine), while coming in below $20 billion per year...which means you'd substantially lower net healthcare costs for millions of people without (further) increasing the deficit at all.

Even if it ended up costing, say, $25 billion/year, this would still be an incredibly good bang for the buck, since that'd amount to a net spending increase of $5 billion/year to ensure several million more people get covered with comprehensive healthcare policies.

Another way of approaching this would be to use that $20 billion/year to reinstate the federal reinsurance program which lasted from 2014 - 2016. However, this would only address the "over 400% FPL" side of the issue, so using all of the money for reinsurance would actually amount to hurting the 250-400% FPL crowd. If reinsurance was part of the equation, it's still important to raise/beef up the APTC & CSR tables as well.

UPDATE: I can't believe I forgot to mention this, seeing how I wrote up not just one, but two major posts about it just a couple of weeks ago, but it's important to note that depending on how the federal appeals process plays out in the CSR lawsuits, it's conceivable that the House Dems may even have up to $32 billion per year to negotiate over, not "just" $20 billion.