UPDATE: Where Things Stand ahead of the HC.gov Week 7 Snapshot Report

Earlier today, no fewer than six of the state-based exchanges released their latest numbers: Official 2019 Open Enrollment totals through December 15th. In two cases (Maryland and Washington State), this also counts as their final tally, although the final number may increase slightly more as a few hundred "in line by midnight" enrollees are tacked on.

The other four states (Colorado, Minnesota, Massachusetts and New York) gave what amounts to a "mid-season report", since all four still have anywhere from four to six weeks left for people to #GetCovered.

Missing from today's updates were final (or any) numbers for Idaho or Vermont, both of which also closed up shop on Saturday (Vermont is still letting a handful of people who had problems enrolling sign up for another few days, but this will likely amount to only a few hundred at most given the tiny population of the state). Also missing were more recent updates for California, Connecticut, DC or Rhode Island.

Update: OK, strike that...Connecticut did release an updated total, but it's only around 1,000 more people than their prior update. The state-level table below has been updated but not the main graph itself yet.

Update x2: I also have an unofficial update from Rhode Island, tacking on another 1,000 enrollees.

Assuming similar post-12/15 numbers to last year, I estimate the 8 states with later final deadlines will tack on an additional 160,000 or so more between 12/15 - 1/31...which would bring the grand total for the 12 state-based exchanges up to right around 3.04 million enrollees. If so, not only would this surpass last year's 3.01 million, it would also beat the record for the state-based exchanges collectively.

Finally, also missing from the graph below is The Big One: The Week 7 HealthCare.Gov Snapshot Report, which should presumably come out on Wednesday. Last year HC.gov states enrolled 8.74 million people. In order to match that, Week Seven will have to add a whopping 4.61 million enrollees to the total.

I've previously noted that I expect roughly 5.97 million total renewals. If I'm right about that, the Week 7 report should have something like 2.9 million, most of which will be auto-renewals.

If so, that would mean HC.gov would have to rack up over 1.7 million additional new enrollees in the final 7 days of Open Enrollment. For comparison, last year just 1.0 million new enrollees signed up in the final week...although that only included 6 days, not 7. If you assume an extra 100K to account for the extra day, that'd bring HC.gov in around 600K short. With the state exchanges likely to be almost dead even, that would bring the grand total in around 600K shy...which is slightly above the 570K I originally predicted back in late October.

In any event, as of this evening I've confirmed 6.84 million QHP selections nationally, plus 870,000 BHP enrollments in Minnesota & New York (I expect this total to end up right around my 900K projection by the end of January, perhaps slightly higher).

UPDATE 12/19: I've been informed that the Week 7 HC.gov report (which should be released sometime today) may not include auto-renewals. If it doesn't, that will likely mean a good 1.5 million or so enrollees would be missing from the HC.gov total (for comparison, last year 1.7 million people were automatically re-enrolled across the HC.gov states).

Scroll past The Graph for a state-by-state breakout: 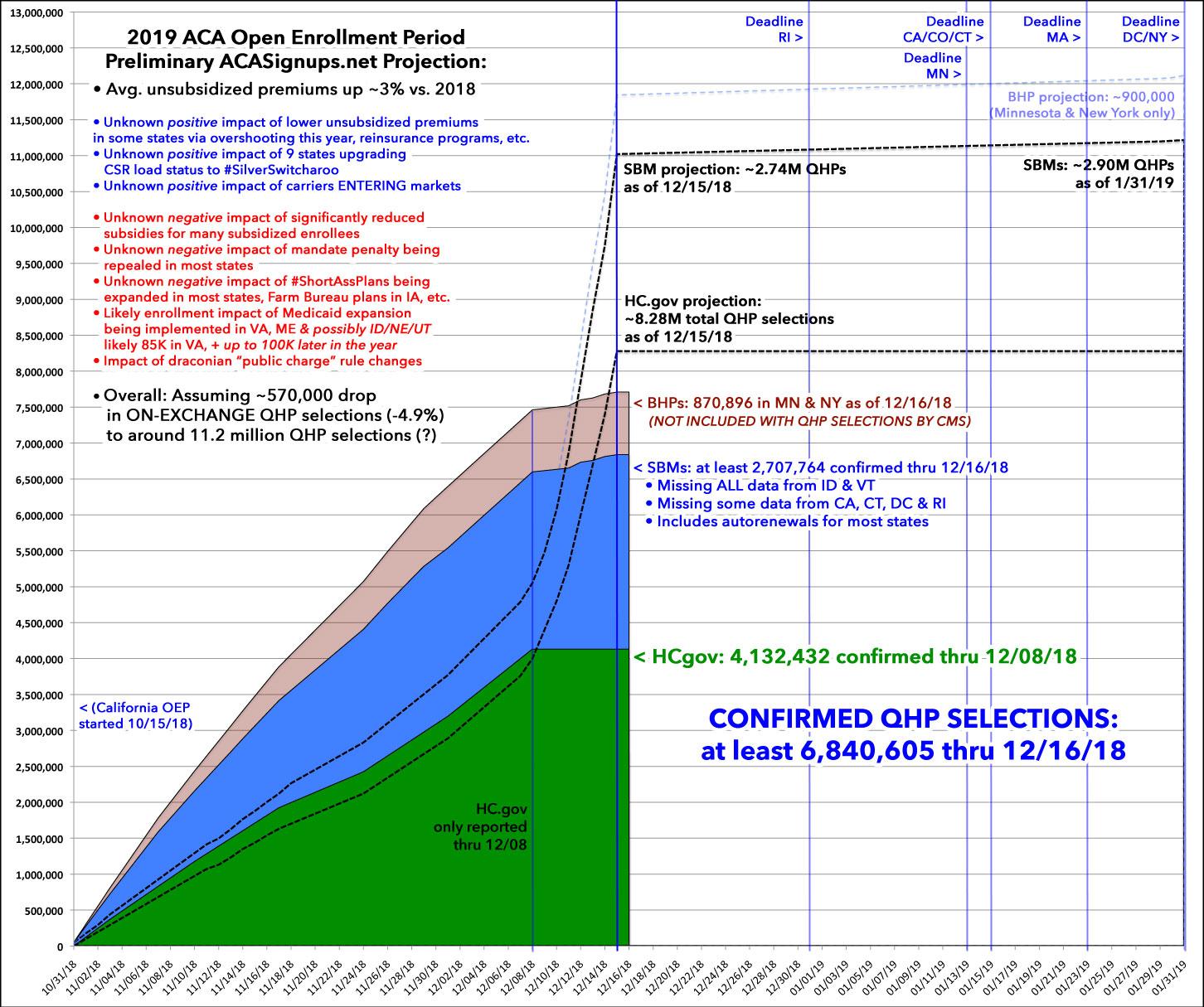 If you scroll down further, you'll see a bar graph with the states listed relative to what percentage of last year's final Open Enrollment Period total they've achieved, with the state-based exchanges in blue and the federal (HC.gov) exchange states in green. Massachusetts and Maryland have both surpassed 100% (and again, Massachusetts still has another five weeks to go!). I expect New York, Minnesota, Colorado and Rhode Island to break last year's totals as well. California and Connecticut should come close and may break 100%.

DC is 7.6% behind at the moment, but still has all the way until the end of January to make up that gap, so I'm not too worried. Washington State is the only SBM with a disappointing performance this year--their deadline has passed and they came in 8.5% short of last year, after seeming to be ahead of the game earlier in the season.

I have no idea about Idaho or Vermont (at the bottom) since neither one has released any enrollment data yet.

As for the 39 HealthCare.Gov states, obviously they look like they're doing terribly, but that's mostly because they're all missing the entire final week of enrollment and the huge blob of auto-renewals which are always dumped onto the totals right after 12/15 (CMS presumably loaded those into the system today).

Florida, Nebraska, Wyoming and Mississippi are all doing the best of the HC.gov states, with Florida down just 2.2% as of December 8th. I don't know what's going on in the Sunshine State, although FL does have a unique situation--around 13% of the entire nonelderly population is enrolled in the individual market, which is around double that of the U.S. popuation overall (in South Florida it's even higher...close to 20%). Not sure what's going on in the NE, WY or MS either.

At the opposite end of the spectrum, Virginia coming in dead last is completely expected, since they just expanded Medicaid which means roughly 85,000 exchange enrollees earing 100-138% of the Federal Poverty Level are being shifted over to Medicaid instead. Beyond that, I haven't a clue why Louisiana, West Virginia, Indiana or Ohio are down so much relative to other states.

Politcally and policy-wise, the state I'm keeping my eye on the closest is New Jersey. NJ Democrats passed several important laws last spring to shore up and stabilize the ACA market, including a robust reinsurance program and reinstating the ACA's individual mandate penalty.

These measures worked perfectly in terms of lowering unsubsidized premiums statewide to the tune of a whoping 22 percentage points (from a 12.6% increase to a 9.3% drop) or around $1,500 per unsubsidized enrollee. Fully 6.8 points of that reduction (nearly $500 per enrollee) was due specifically to reinstatement of the mandate penalty.

Let me repeat that, because there's gonna be a lot of criticism of this move if New Jersey's final enrollment total ends up coming in significantly behind last year: Reinstating the mandate in New Jersey lowered premiums by nearly $500 per enrollee. On that front, it was extremely successful.

The problem (which will get all the attention) is that it doesn't appear (so far) that the mandate is having much impact in terms of actually spurring people into enrolling. NJ is right in the middle of the pack, sandwiched between Michigan and Arkansas. WHY isn't it doing better in spite of the mandate being revived? Well, as I pointed out a week or so ago, reinstating the mandate doesn't do any good if no one knows you've done so.

I don't know what sort of marketing/education effort the state did to get the word out to residents over the past six months (beyond a notice on the home page of the GetCovered.NJ.Gov website portal). If they had a full-blown marketing campaign the way Massachusetts has and the numbers still come up way short, then critics may have a point. If, however, they just slapped a note on the website and called it a day, that won't cause anyone to enroll who wasn't planning on doing so, since a) no one who doesn't visit the site will know about the penalty and b) most of those who visit the website are those likely those who were planning on signing up in the first place.

Anyway, we should find out the answers to these questions and more sometime Wednesday... 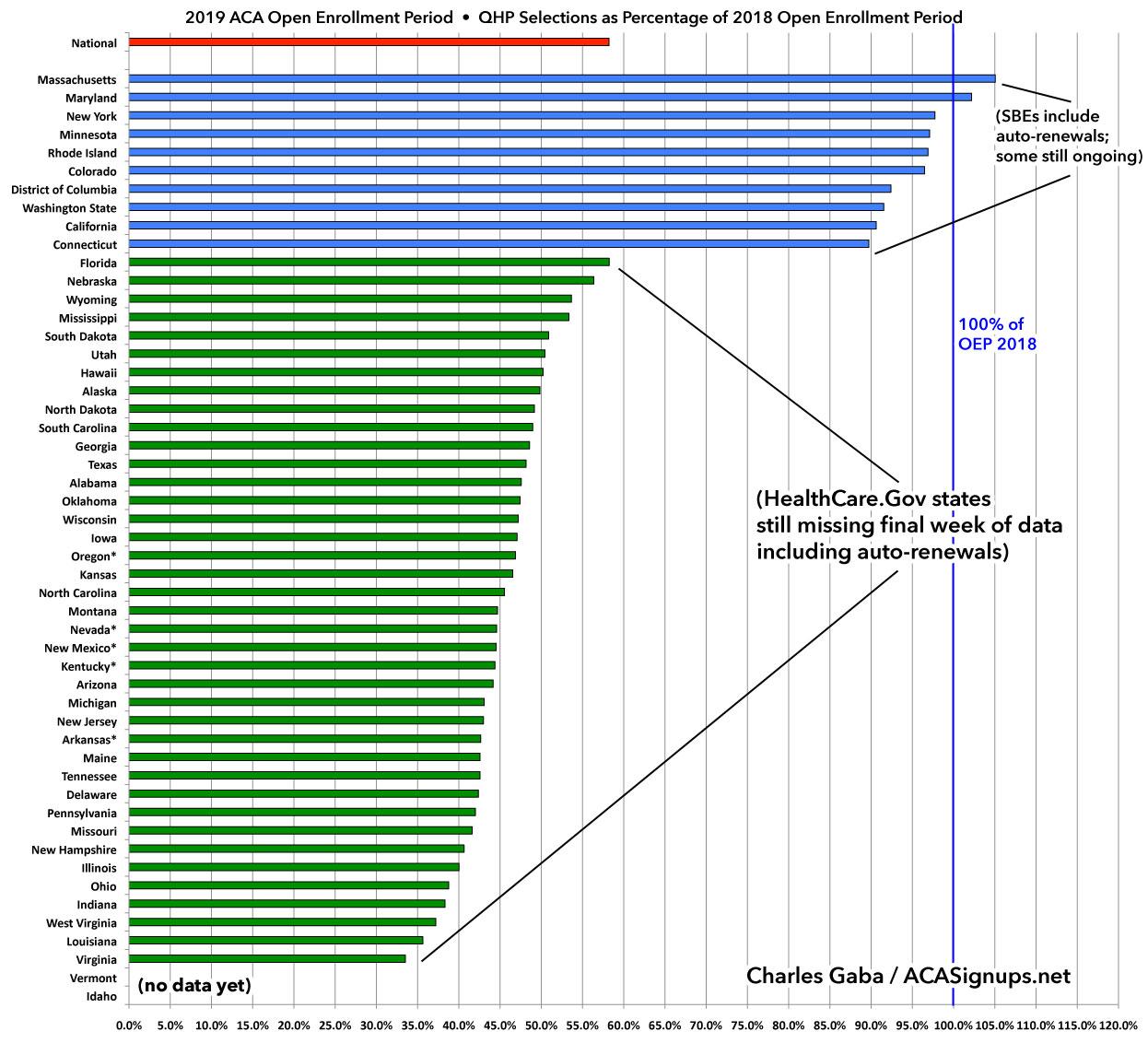 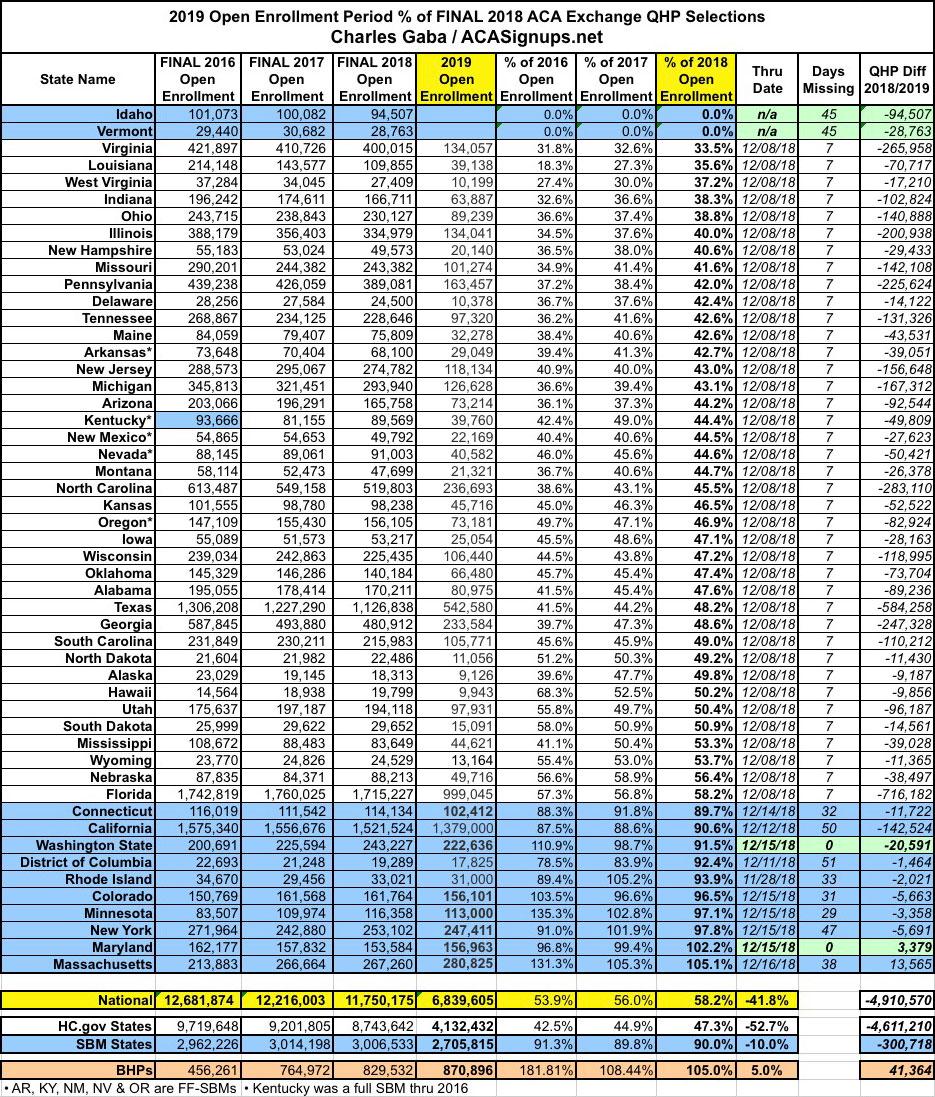