In week two of the 2019 Open Enrollment, 804,556 people selected plans using the HealthCare.gov platform. As in past years, enrollment weeks are measured Sunday through Saturday. Consequently, the cumulative totals reported in this snapshot reflect one fewer day than last year. 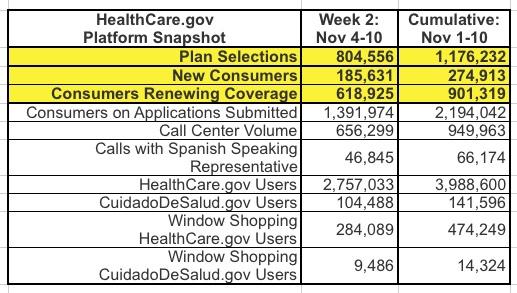 Adjusting for the 1-day difference, HC.gov enrolled around 1.35 million people in the first 10 days last year, so the 2019 season is running around 13% cumulatively lower year over year for the first 10 days.

As I noted last week, enrollments were down 20% (adjusted for the 1-day difference) year over year in the first three days, so much of the gap has been made up in the second week. My guess remains that the high-profile midterm elections played a role in damping down enrollments up through around November 8th, after which they shot back up again. Lending support to my theory is the Week 2-only numbers: 804,556 vs. 876,788 last year. That's only down 8%, and it includes the days leading up to the midterms.

Keep in mind that I'm actually expecting HC.gov enrollment to drop around 5.3% year over year due to various sabotage factors (around 460,000 people), while I only expect the 12 state-based exchanges to drop by around 2.3% (110,000 people).

Enrollments in both Minnesota and Washington State are actually higher year over year (by around 6% and 5% respectively) so far...but both of those figures appear to include front-loaded auto-renewals, which skews the numbers, while HC.gov only includes new enrollees and manual renewals, making it an apples & oranges comparison.