I want to stress the unofficial caveat here.

Last year there was an unprecedented amount of uncertainty and chaos surrounding the Affordable Care Act. On the one hand, you had Congressional Republicans desperately attempting to repeal the ACA altogether a good half a dozen times...and coming within a single "thumbs down" of doing so at one point.

At the same time, you had Donald Trump screaming into the wind about doing everything he could to simultaneously cause the ACA exchanges to "blow up" or "implode", depending on the tweet of the day, culminating in him finally pulling the plug on Cost Sharing Reduction reimbursement payments.

Meanwhile, The rest of Trump's lead administrators were doing all they could to undermine, sabotage, or otherwise hinder nearly every aspect of the ACA, from slashing the marketing budget for HealthCare.Gov by 90% and the Navigator/outreach budget by 40% to instructing the IRS not to enforce the individual mandate penalty. Numerous insurance carriers continued the trend of dropping out of the ACA market altogether, with several of them stating point-blank that Trump's CSR cut-off, along with other actions by the administration, were specifically to blame for their decision.

On the other hand, most carriers in most states responded to the CSR cut-off by scrambling to follow California's lead at the last minute and going the #SilverLoading or #SilverSwitcharoo route...in short, they simply jacked up their unsubsidized premiums on Silver plans accordingly to cancel out their CSR losses. This, combined with the fact that most of them had actually broken even or even made a solid profit starting in 2017 (under Obama-era regulations), meant that the damage wasn't as bad as they thought, and the 29% average premium hikes pretty much mitigated or cancelled out the rest of it.

So what about 2019? Well, there have been additional major developments since last year, and while some will drag enrollment down, others will actually push enrollment up (Dave Anderson has a similar list of factors over at HealthAffairs):

On top of all of this, there are some new major monkey wrenches which have been thrown into the future of the ACA itself. The biggest is the jaw-droppingly stupid #TexasFoldEm federal lawsuit, the complete mangling of the 1332 Waiver rules just announced last week, and of course the 2018 midterm election...which takes place a week after OEP begins. The weird thing is that while the ACA itself is in just as much peril, if not more, than it has ever been to date...the 2019 OEP itself is in some ways less uncertain than it was last year.

To understand how this can be, you have to remember that I'm talking about the immediate future only: The 92-day period from November 1st through January 31st, and especially the 45 days from November 1st - December 15th, which is the enrollment deadline for at least 42 states or so. All hell may break loose after OEP ends, but the insurance carriers should be contractually locked in for the full 2019 calendar year, which means any major fallout from the #TexasFoldEm decision and/or 1332 waiver changes shouldn't really kick in until 2020.

Even so, there are still a lot of unknowns at play tugging the numbers both ways. With all of this in mind, I'm going to go with a spitball estimate of perhaps 11.2 million QHP selections nationally by the time the dust settles on January 31st, 2019. I figure enrollment in the 12 state-based exchanges will only drop slightly (perhaps 100K or so). California, DC, Maryland and Massachusetts all have strict restrictions on short-term plans (or ban them completely); DC and Massachusetts have their own mandate penalty, and so on. In addition, Colorado is upgrading to #SilverSwitcharoo, Maryland and Minnesota have robust reinsurance programs, etc., all of which should mostly mitigate the negative impact.

I expect the 39 HealthCare.Gov states, on the other hand, to see a drop of perhaps half a million people or so. As noted above, Virginia will automatically "lose" around 85,000 exchange enrollees due to implementing their Medicaid expansion program, and although several states on HC.gov do have restrictions on #ShortAssPlans (and New Jersey did implement their own mandate penalty), those compose a much smaller portion of these 39 states.

Again, I have to stress: I could be dead wrong, and wildly so, on any or all of the above. 2019 QHP selections could drop off sharply to 10 million or so...or they could break 12 million again. It's a crapshoot as always. 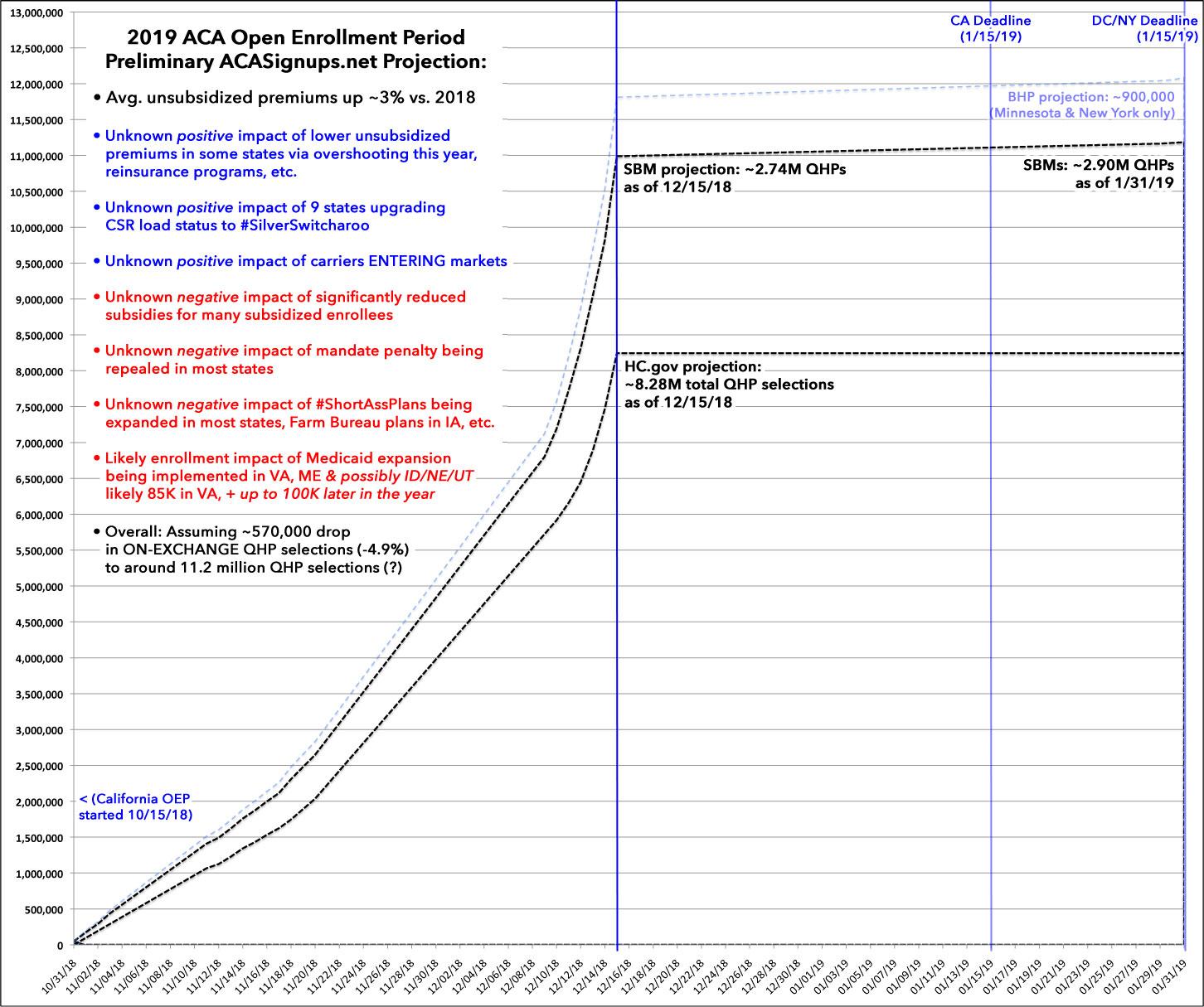