In addition, another 11 states appeared to be going the "standard" Silver Loading route, which isn't quite as good but is still much better than Broad Loading for most people. Well, it now looks like that number is actually 12.

Oklahoma is unique in the country when it comes to how they handled the Cost Sharing Reduction (CSR) cut-off situation. Every other state either waited until it was clear that Donald Trump was going to cut off CSR payments (i.e., last summer) or waited until he actually did so (last October) to take action. A handful didn't take action at all even then (Vermont, North Dakota, DC).

However, Oklahoma didn't really have to take any CSR loading action for 2018...because they had already done so for 2017:

...Yep...BCBS of Oklahoma had ALREADY baked in the CSR load over a year ago.

In terms of how BCBSOK handled the CSR load, as far as I could tell at the time, they went the "broad load" route, spreading the CSR cost out among every metal level both on and off-exchange. I wasn't sure whether to categorize them as "No Load" or "Broad Load" for 2018, but went with "Broad Load" in the end because hey, that extra cost was still there in every policy, carried over from the prior year.

For 2019, the official BCBSOK rate filing doesn't really give much insight into how they're handling the CSR load beyond mentioning that yes, it's part of the cost, so I assumed that they were sticking with "Broad Loading" another year.

However, it looks like I was wrong. Here's why:

First, Dave Anderson of Balloon Juice dug into the just-released 2019 Public Use Files for the plans being offered in Oklahoma next year and found a literal gold mine:

Twelve counties in Oklahoma have an extraordinarily odd pricing arrangement. Anyone who qualifies for premium subsidies on the individual market can get a $0 Gold plan***. Below is the relevant part of the pricing table for one of the counties.

...Gold plans will be effectively free for anyone who qualifies for subsidies. The Blue Cross Silver plans with CSR are better financial protection for anyone making under 250% Federal Poverty Level and Bronze is cleanly dominated. What is happening is that BCBSOK is running a Silver Load/Gold Gap game on their plan offerings with a price order of Bronze-Gold-Silver.

...However, they are both in the county. Medica’s general price level in the twelve counties are much higher than the BCBS-OK so instead large but not incredibly massive gapping, BCBS-OK will be running some ridiculous gaps where all of their plans are effectively free for the subsidized population. The Gold plan may not be the optimal plan for everyone. It is clearly beaten by the BCBSOK CSR Silver plans for anyone earning under 200% FPL. There is a fuzzy space between 201-250% FPL between Gold and CSR Silver.

But there is free gold lying on the sidewalk just waiting for people to sign up. I am very curious if people will sign up for $0 premium Gold plans in these counties as this will inform us as to how much price really matters versus other non-financial factors.

OK, so this proves that BCBSOK is Silver Loading. But what about Silver Switching?

Well, to figure that out, I plugged in identical information for a single 40-year old man living in Alfalfa County, Oklahoma earning too much to qualify for tax credits via both HealthCare.Gov and directly via the BCBSOK website. Here's what I came up with for Silver plans: 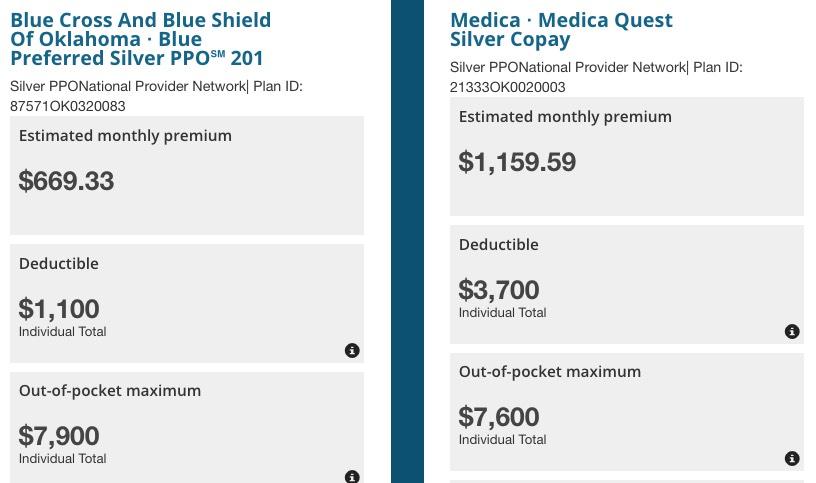 OK, this makes it look like BCBSOK is doing "standard" Silver Loading: Both versions of the "201" plan run $669.33. Fair enough (the "306" PPO is off-exchange only, has a higher deductible as well as some differences in outpatient drug coinsurance pricing). To be sure, I ran the same numbers for the same 40-year old in Oklahoma County: 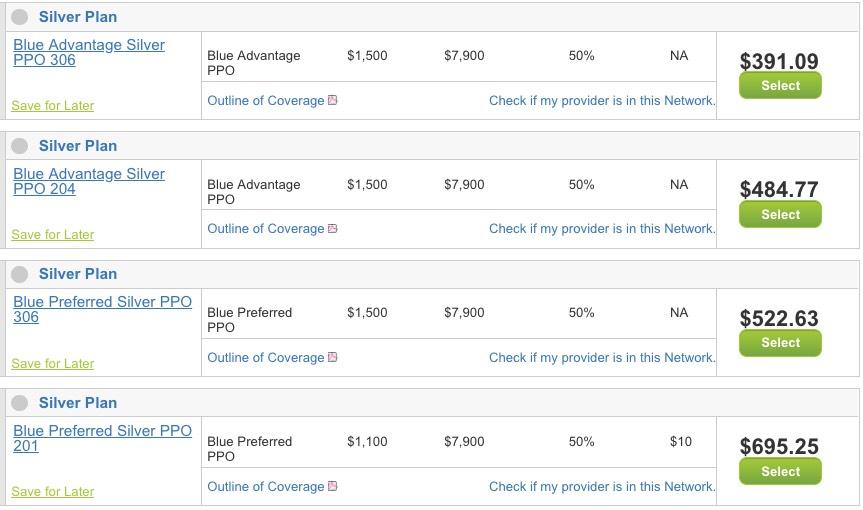 Sure enough, the corresponding plans appear to be priced the same both on and off-exchange, so this would be "standard" Silver Loading instead of full Silver Switching.

Meanwhile, let's compare the Silver plans to their Gold counterparts: 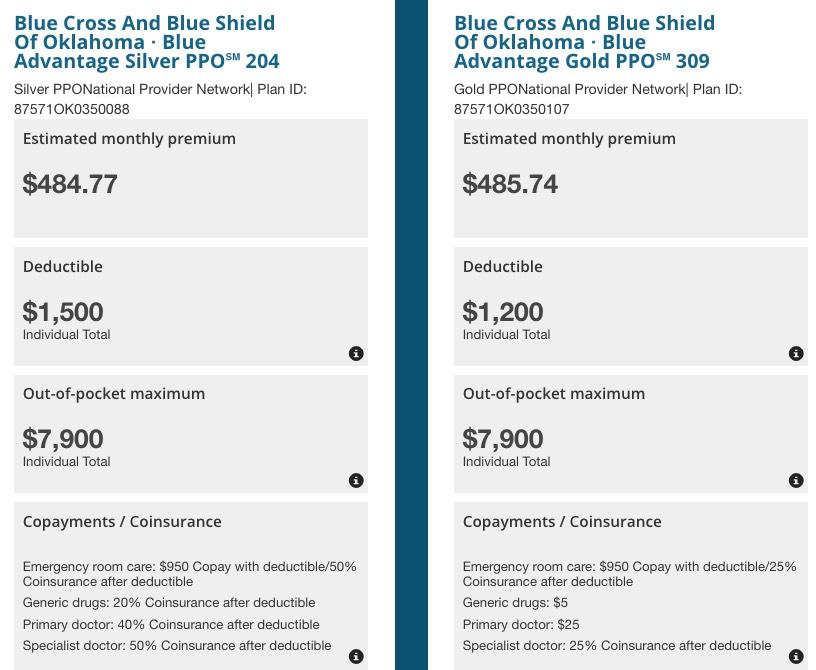 Yup, a Gold plan (with a $300 lower deductible and much lower copayments) costs just $0.97 more per month at full price, which means it should be dirt cheap for subsidized enrollees.

Here's the other example: 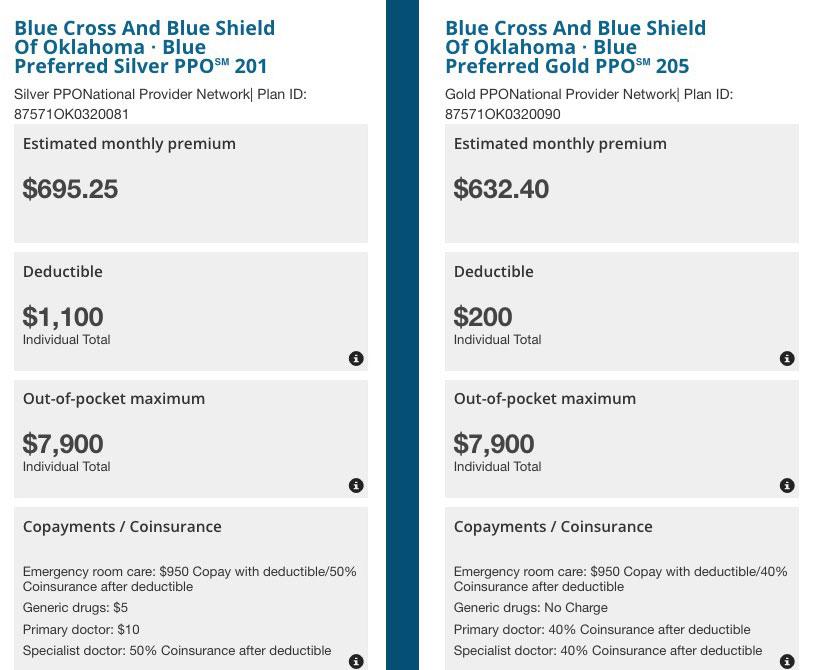 Wow! In this case, the Gold plan has a $900 lower deductible, no charge for generic drugs and a 10% lower coinsurance rate for specialists, while costing $62.85 less per month than the Silver plan. That's $754 less for the full year (and possibly up to $1,654 less if you max out the deductible in both cases). The primary doctor coinsurance cost is actually higher (40% instead of a flat $10), but for the vast majority of people the Gold plan will still cost a lot less than the Silver plan...and that's before any ACA tax credits are applied.