It's ACASignups.net's 5th Anniversary. Help keep it going another 5 years! 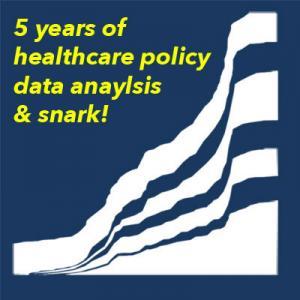 On October 11th, 2013, I posted the following in a blog entry over at Daily Kos, where I'd been a regular contributor since 2003:

"Seriously, though, HHS should really start releasing the official (accurate) numbers of actual signups for all 50 states (or at the very least, the 36 states that they're responsible for) on a daily--or at least, weekly--basis. I don't care if it's a pitifully small number. 100,000? 10,000? 100? 10? Even if it's in single digits, release the damned numbers. Be upfront about it. Everyone knows by now how f***** up the website is, so be honest and just give out the accurate numbers as they come in."

Two days later, on October 13th, I registered "ObamacareSignups.net" (which soon changed to ACASignups.net, not because I had a problem with "Obamacare" but because it was easier to type) and posted an announcement over at dKos, asking for some crowdsourcing assistance.

This was supposed to be just a lark...a six-month thing which would combine my passion for data analysis, politics and website development into one nerdy hobby.

Instead...well, if you've been following my work for any length of time, you know the rest of the story. ACASignups.net soon caught the attention of major media outlets, and it's been cited and used as a resource ever since by media outlets spanning the ideological spectrum including the Washington Post, Forbes, Bloomberg News, Vox.com, MSNBC, the New Republic, USA Today, the CATO Institute, National Review Online and The New York Times among others, and has even received a mention (albeit an obscure one) in prominent medical journals such as the New England Journal of Medicine and The Lancet.

For awhile I pretended that this was still a "hobby"...I accepted donations, sure, and even slapped some banner ads on the site to drum up a few bucks, but in my mind, I was still officially a website developer...even though I was spending 90% of my time posting updates here instead of maintaining my business. In April 2014, at the peak of the media attention and insanity over the crazy first open enrollment period, I even came down with a nasty case of shingles whch laid me up for over a month. I was in denial for years even as the business suffered, constantly thinking that as soon as this Open Enrollment Period was over, I'd wrap things up...

My ass was effectively saved by Markos and the Daily Kos community that year, who collectively raised enough money to not only make up for my lost business in 2014, but also to allow me to keep the site operating through 2015 as well. I’m eternally grateful for that support.

In the fall of 2016, things came to a head and I realized that I could no longer continue living with one foot in each world: I had to either mothball this site and refocus my efforts on building my web development business back up...or I had to try and earn a living at it.

At the time--and I swear on my life this is true--I was planning on doing the former. My reasoning was simple: If Hillary Clinton had become President, there probably wouldn't be that much interest in my work here going forward. There'd still be plenty of healthcare stuff to write about, but the ACA would be safely embedded into the American landscape and interest in the day to day minutiae of its developments would fade over time.

On November 9th, 2016, I actually registered ACASignoffs.net and even swapped out the logo at the top of the site. I was planning on leaving it there for 24 hours as a small symbol of the atrocity which we had inflicted upon ourselves, but I was inundated within an hour or so with pleas from people to keep the site up and running; most were of the "it's more important than ever!" variety.

And so, instead of pulling the plug on the site, I went the other way and redoubled my efforts. I found myself effectively reversing my role for most of last year--instead of tracking how many people were signing up for healthcare coverage via either exchange plans or Medicaid expansion, I instead spend much of my time projecting how many people were at risk of losing coverage in the event that the latest GOP repeal/replace debacle were to push through.

In short, the decision was made for me...but I knew that if I was going to continue doing this full-time, I'd have to be able to make a living at it as well. I've made arrangements with the Robert Wood Johnson Foundation to advertise on the site on a long-term basis, which solves a large portion of the issue, and I'm eternally grateful to everyone who's made one-time donations over the years. However, I also needed something more consistent and reliable, which is where Patreon came in.

Since I launched my Patreon account, around 150 people have blessed me with monthly support starting at $1/month. I'm incredibly grateful to each of them; between the RWJF ads, one-time donors and my existing Patreon support base I'm most of the way to where I need to be to sustain the site long-term. If I can triple that number (or even come close to it), the site should be in good shape for the foreseeable future.

What do you get out of it? Well, to be honest, not much: Aside from the satisfaction of helping support the site, anyone who signs up at the $5 default level or higher will receive the weekly newsletter (mostly just a digest version of the prior weeks' blog entries, although I usually add some additional notes of interest) as well as a user account for the website which removes the banner ads. In addition, once in a blue moon I'll post something exclusive (temporarily) to Patreon supporters like video explainers and the like which are "members only" for a few days before being made public.

I want to be clear about this: I'm not asking existing donors for anything more, and I'm not asking anyone who can't afford it to do so...but if you appreciate the work done at ACASignups.net, feel that it's an important part of the healthcare analysis and policy dialogue nationally, and are in a position to do so, please consider becoming a monthly supporter via Patreon!

Note: You can also become a monthly supporter via PayPal, or if you'd prefer to make a one-time donation, you can also do so via PayPal or GoFundMe .