Let's Get Ready To Rumble: ACASignups.net vs. Avalere Health

Last Friday I went on a bit of a rant, irritated about the "EXCLUSIVE!" label slapped on a story from the AP in which they "broke" the news that I've been reporting on here at ACASignups.net for several months: That ACA-compliant individual market healthcare policy premiums are only going up around 3-4% on average next year. I found it even more noteworthy that the AP's analysis (which was actually done for them by the Avalere Health consulting firm) matched up with my own analysis almost perfectly:

Well, today I discovered that our findings are even more in line with each other than that. The original AP story doesn't go into a state-by-state breakout of Avalere's findings...but this related AZCentral article does just that: 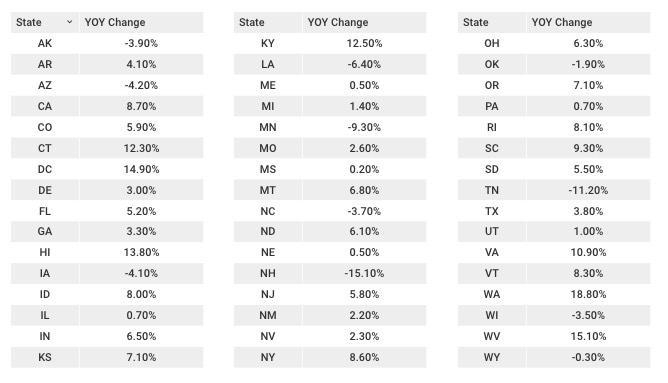 With this in mind, I've plugged in both Avalere's estimates and my own side by side to see how they compare. The table below includes a few updates since last week:

With all of this in mind, here's how our estimates line up: 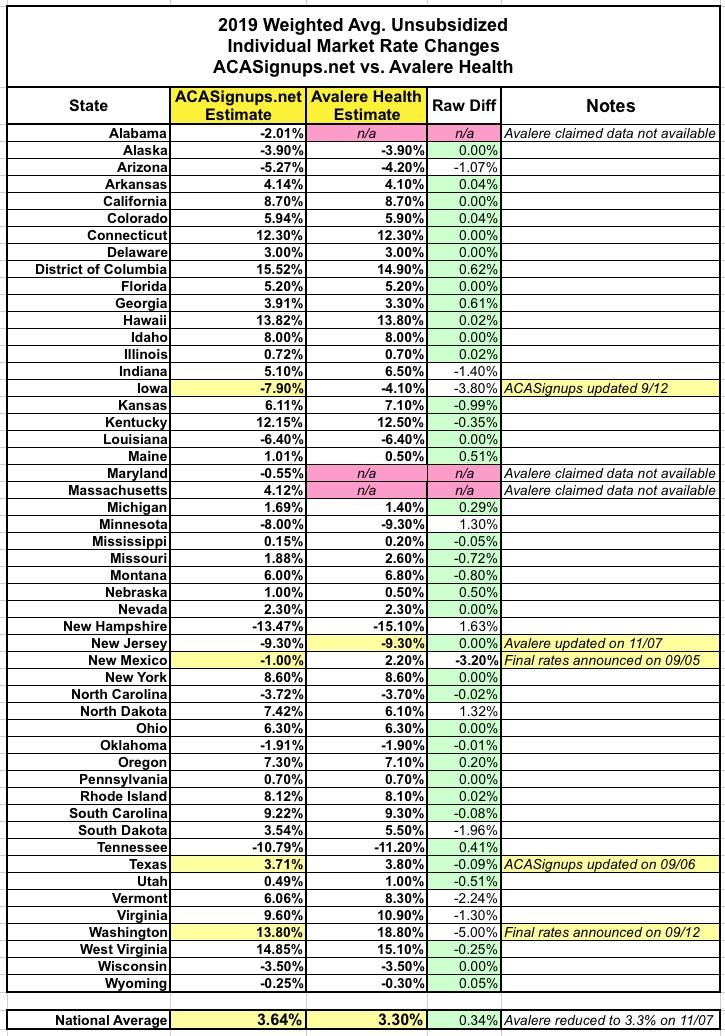 As you can see, they're either identical or off by less than 1 percentage point in 37 states...and Avalere didn't even run an analysis in three others, for reasons unknown (at least partial data for Alabama, Maryland and Massachusetts has been available for over a month, so I'm not sure what their rationale was).

New Mexico and Washington have simple explanations: I've updated my estimate, Avalere Health hasn't done so yet. Vermont is only off by 2.2 points.

Really, of all 50 states +DC, Iowa is the only state where there's a significant discrepancy which I don't have an explanation for. Medica is the only carrier offering ACA policies this year and next (Wellmark is supposedly re-entering the market in 2019, but since they aren't there this year there's no current premiums to measure against year over year).

Medica announced back in June that they're raising premiums "less than 5.6%" on average, which I took to mean perhaps 3.0% at the time. Unfortunately, I don't have access to their actual average rate change, requested or approved; I don't see their filings in the SERFF database, and over at RateReview.HealthCare.Gov they have three listings ranging from a 16.5% decrease to a 4.7% increase...but the filings themselves are redacted, so I have no way of knowing what the relative market share of each is. I presume Avalere Health was able to acquire the unredacted version of their filings (or simply managed to get someone at Medica to tell them the weighted average).

UPDATE: As noted above, I've been able to resolve the Iowa mystery after all thanks to a tip from a commenter below!

Anyway, both of our estimates will likely inch their way up or down slightly as more final, approved rate change data comes in from the rest of the states, but it's safe to say that the national average will be somewhere between 3-4%.

Of course, even that assumes that every single current enrollee renews their current policy, which never happens. Some will drop out, some new people will sign up, many will either upgrade or downgrade to a different metal level, and many will switch from their current carrier to a different one...which means that the actual average 2019 premium change will end up being a few points off from either Avalere or my estimates next spring.