EXCLUSIVE! AP breathlessly confirms...exactly what I've been reporting for the past two months! 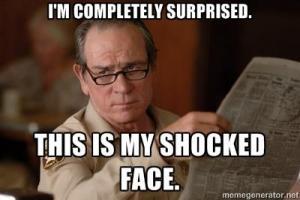 Millions of people covered under the Affordable Care Act will see only modest premium increases next year, and some will get price cuts. That's the conclusion from an exclusive analysis of the besieged but resilient program, which still sparks deep divisions heading into this year's midterm elections.

The Associated Press and the consulting firm Avalere Health crunched available state data and found that "Obamacare's" health insurance marketplaces seem to be stabilizing after two years of sharp premium hikes. And the exodus of insurers from the program has halted, even reversed somewhat, with more consumer choices for 2019.

As I noted in an early-morning Twitter rant, I have no problem whatsoever with other healthcare analysts running independent analyses of the same data I do, especially if they come to the same conclusion. That's how it's supposed to work, after all--multiple analysts crunch the numbers on the evidence independently of each other, and if they come to similar conclusions, that's a pretty good indicator that the conclusions are valid.

It's just the "EXCLUSIVE!" claim which irritates the living crap out of me. I've been painstakingly analysing hundreds of insurance carrier rate filings over the past 4 months, with full transparency about my data sources, methodology and conclusions, posting screen shots and spreadsheet updates with every modification all along...with 1/1,000th the resources that the AP and Avalere Health have at their disposal.

(sigh) OK, anyway, let's take a look at what they found and see how it compares to my own analysis:

The analysis found a 3.6 percent average increase in proposed or approved premiums across 47 states and Washington, D.C., for next year. This year the average increase nationally was about 30 percent. The average total premium for an individual covered under the health law is now close to $600 a month before subsidies.

Of course, my analysis includes all 50 states plus DC, vs. the 47 in the AP/Avalere analysis, which could easily account for the slight difference. Ap/Avalere didn't include Alabama, Maryland or Massachusetts, claiming that "data wasn't available" for those states (even though it actually was...as of a month ago).

It's also worth noting that my own 3.7% estimate will change slightly more as final/approved numbers come in from the rest of the states. For instance, DC's average may drop dramatically now that they've formally reinstated their individual mandate penalty, and just yesterday I nudged Texas's average up from 1.5% to 3.7% based on some additional/revised filing data which I haven't had a chance to plug into the national spreadsheet yet.

So yeah, I'd say I'm pretty much dead-on target.

Moving on to the political implications, the AP gets some of their conclusions right...

...The moderating market trend "takes the issue away from Republican candidates" in the midterm elections, said Mark Hall, a health law and policy expert at Wake Forest University in North Carolina. "Part of the mess is now their fault, and the facts really don't support the narrative that things are getting worse."

...but completely misrepresents the situation on others:

Market stability also appears to undercut Democrats' charge that Trump is undermining the program. But Democrats disagree, saying the ACA is in danger while Republicans control Washington, and that premiums would have been even lower but for the administration's hostility.

This is utter nonsense. Last year's ACA sabotage (most dramatically, Trump's cutting off of CSR reimbursement payments) caused unsubsidized enrollees to have to pay over $900 more apiece this year. THIS year's sabotage (mandate repeal and #ShortAssPlans expansion) means unsubsidized enrollees will have to pay around $600 apiece more next year than they would otherwise be paying...and the exact wording of that is extremely important.

That's around $1,500 more per enrollee per year that unsubsidized enrollees are paying specifically due to sabotage of the law by the GOP, full stop.

...Repeal of the ACA's requirement to carry insurance doesn't seem to have had a major impact yet, but Banerjee said there's "a cloud of uncertainty" around the Trump administration's potential policy shifts. Yet some administration actions have also helped settle the markets, such as continuing a premium stabilization program.

Wait...what? What "premium stabilization program" is the AP referring to here? The GOP undermined the Risk Corridor program, and the federal Reinsurance program expired under the law two years ago. The administration has given their OK to several state-based reinsurance programs since then, but that hardly counts as "continuing" a federal program.

The only thing I can figure the AP is referring to here is CMS's "decision" to go ahead and proceed with the risk adjustment fund transfer program last month...but the only reason it was in jeopardy in the first place is because CMS Administrator Seema Verma unnecessarily chose to "freeze" the transfers in the first place.

I award them no points for changing their minds on doing one bad thing they were planning on doing a few weeks earlier.

...Tennessee Republican Sen. Lamar Alexander called that a "welcome step," but argued rates could have been even lower if congressional Democrats had supported a market stabilization bill. Democrats blame Republicans for the failure.

This is classic "bothsides-ism". The "market stabilization bill" Alexander refers to was only necessary because Trump cut off CSR funding last October in the first place, and the GOP insisted on tacking on draconian anti-abortion language to their "fix" for the program this past spring.

To calculate premium changes, Avalere and The Associated Press used proposed overall individual marketplace rate filings for 34 states and D.C., and final rates for 13 states that have already approved them. Data was not available for Massachusetts, Maryland and Alabama. The average rate change calculations include both on-exchange and off-exchange plans that comply with ACA requirements. The government isn't expected to release final national figures until later this fall.

This seems just...odd. As I noted above...yes, at least partial data for all three states was available over a month ago, as shown here:

I suppose AP/Avalere can argue that they couldn't use Maryland's data because they don't know the impact of their recently-approved reinsurance program...but they could have used their preliminary request of 29.5%, which I reported on back in May, and just added a footnote that the reinsurance program is expected to lower this dramatically.

For Massachusetts, there's no sabotage factor this year since the state bans #ShortAssPlans and still has their original, pre-ACA mandate penalty on the books. The market share data wasn't available as of a month ago, but surely AP/Avalere could have included an unweighted average and, again, included a footnote to that effect.

As for Alabama, there's only two indy market carriers in the state, and both of them posted their requested rate filings pretty clearly. Again, the market share between the two is an estimate, but a rough estimate could've been done with a caveat.

Anyway, I don't know how much the AP paid Avalere to crunch all the numbers for them, but it seems to me they could've saved a lot by simply visiting ACASignups.net instead... ;)

(No offense to Avalere...they do great work!)